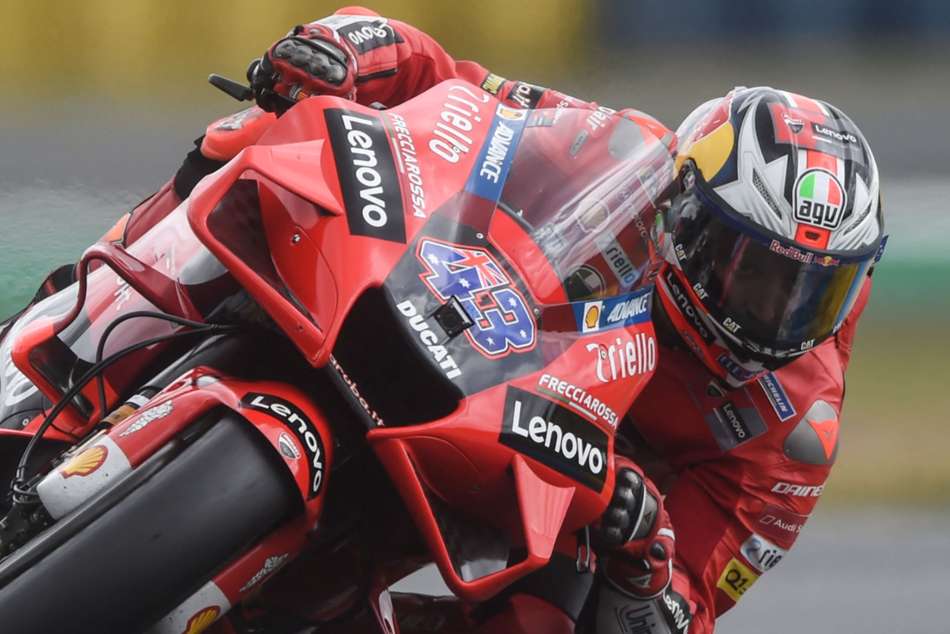 Miller had just one win from 102 races in the top category heading into the Jerez event earlier this month but now has two from his past two.

The Australian’s latest success was far from straightforward but then little was in a wet race at Le Mans.

Miller enjoyed a great start to get ahead of pole-sitter Fabio Quartararo, only for an error to let Maverick Vinales duck through into the lead.

However, after a dry start under looming black clouds, the rain Marquez had hoped for after qualifying duly arrived and Vinales swiftly fell back.

Six-time champion Marquez, without a podium since his return from injury this season, had trailed the front three until the white flag came out but was back tussling with Quartararo by the time the leaders arrived at the pit lane to swap bikes.

A costly error saw Quartararo approach the wrong mechanics, forced to sprint to his other bike as Marquez claimed the lead.

Meanwhile, Miller, who ran off into the gravel prior to the change, was then caught speeding in the pit lane and charged with a double long-lap penalty.

Marquez opted for the medium tyres and tore away from Quartararo into the lead, but the slipperiest section of the track proved his downfall as a brutal crash saw the Spaniard flip off his bike.

Quartararo, aiming to become the first French victor in the top category at this grand prix since 1954, could not hold off Miller despite the penalty, however, and was himself penalised for the earlier pit mix-up.

Miller built a healthy advantage, while Marquez’s race was over when he crashed a second time attempting to recover from the back of the field, skidding off the track in 11th but walking away from the incident.

The drama was not quite done, though, as the track dried rapidly and Johann Zarco, who had passed compatriot Quartararo, closed on Miller in his own bid to end the wait for a home winner.

Miller did just enough to hold on, with French fans having to settle for a pair of riders on the podium, Zarco second and Quartararo third.

That was at least enough to take Quartararo – previously without a home podium in all categories – to the top of the 2021 standings as prior leader Francesco Bagnaia trailed him in fourth.

Denial of responsibility! NewsUpdate is an automatic aggregator around the global media. All the content are available free on Internet. We have just arranged it in one platform for educational purpose only. In each content, the hyperlink to the primary source is specified. All trademarks belong to their rightful owners, all materials to their authors. If you are the owner of the content and do not want us to publish your materials on our website, please contact us by email – [email protected]. The content will be deleted within 24 hours.
best sports newsFallsfranticFrenchGrandMarquezMillernews update sports

A record-breaking, oxygen-starved galaxy may be full of gigantic stars’ shrapnel