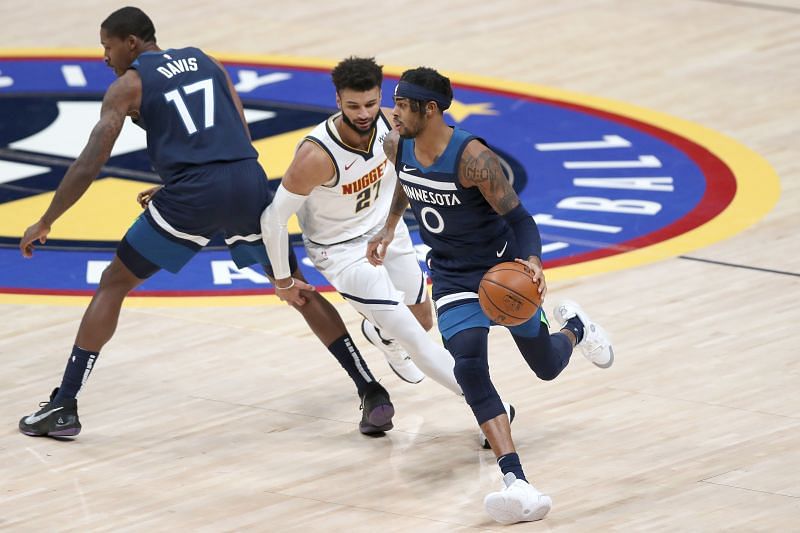 The Minnesota Timberwolves will face off against the Denver Nuggets in a thrilling preseason game at the Ball Arena in Denver on Friday. Both teams have looked impressive this campaign, which means a nail-biting encounter could ensue when they clash.

The Timberwolves are coming into this game after a stunning 117-114 win over the New Orleans Pelicans. Meanwhile, the Nuggets will hope to bounce back after a close defeat to the Golden State Warriors. Both teams will look for a win to boost their morale ahead of the regular season.

The Minnesota Timberwolves started their preseason campaign with an impressive win over a depleted Pelicans side.

D’Angelo Russell scored 19 points, and looked good in the 16:27 minutes he played. He also recorded three boards and five assists, while shooting at 60% from the field. Russell was well supported by Karl-Anthony Towns, who scored 15 points on the night.

The big man’s transformation seems to have brought the best in him, as he shot at 66.7% from the field. Youngster Anthony Edwards has created a lot of news with reports suggesting an increase in his height. He showed glimpses of his brilliance too, scoring ten points on the night to help the Wolves to a win over the Pelicans.

The Timberwolves have some tension in the back office, though. However, they will have to keep all that aside and focus on the game if they want to have a better campaign this year than they did in 2020-21. The young group will hope to put in a strong performance and outshine the Nuggets in this preseason encounter.

After an impressive rookie season, all eyes will be on the no.1 pick in the 2020 draft – Anthony Edwards. His confidence and athleticism were appreciated by the NBA fraternity. However, the player needs to live up to his hype in his sophomore year.

He will be a key piece of the young group in Minnesota, and will need to fire on all cylinders to carry the team to the playoffs. The preseason is the perfect opportunity for Edwards to get himself ready ahead of the regular season. After scoring ten points against the Pelicans, he will hope for a bigger night against the Nuggets on Friday to take his team to victory.

The Denver Nuggets endured a narrow loss against the Golden State Warriors on Wednesday. That makes it two consecutive defeats for the Nuggets this preseason. Michael Porter Jr. was out of the game due to injury. Nikola Jokic had an impressive performance against the Warriors, scoring 17 points and securing ten rebounds in the 15 minutes he played.

Another impressive performance from the Nuggets came from Aaron Gordon, with the forward scoring 16 points. PJ Dozier chipped in with 13 points while shooting at 55.6% from the field. Injuries are a worrying sign for the Nuggets. But they will hope to count on their second unit to deliver a special performance against the Timberwolves.

Aaron Gordan was signed midway through last season by the Nuggets. He impressed with his performances, instantly finding a starting place on the roster. Gordan recently signed a four-year deal with the Nuggets. He is expected to play a big role in their upcoming campaign.

Preseason would be the perfect test for Gordon, as he is expected to play a significant amount of time. After failing in the first two games, he will be keen to put up a big performance and lead the Nuggets to a win over the Timberwolves on Friday.

The Timberwolves have all the momentum coming into this game. They have a lot of firepower in their arsenal, and are expected to start their best five against the Nuggets. Despite the experience in the Nuggets roster, it looks like the Timberwolves could continue their winning momentum and take the win on Friday.

Where to watch the Timberwolves vs Nuggets game?

Streaming for preseason games is available on the official NBA app. A subscription to this app will give you access to all NBA preseason and regular-season games. The Timberwolves vs Nuggets game will be telecast on Altitude Sports as well.

Denial of responsibility! NewsUpdate is an automatic aggregator around the global media. All the content are available free on Internet. We have just arranged it in one platform for educational purpose only. In each content, the hyperlink to the primary source is specified. All trademarks belong to their rightful owners, all materials to their authors. If you are the owner of the content and do not want us to publish your materials on our website, please contact us by email – [email protected]. The content will be deleted within 24 hours.
8thBasketballbest sports newsDenverDenver NuggetsKarl-Anthony TownsmatchMinnesota