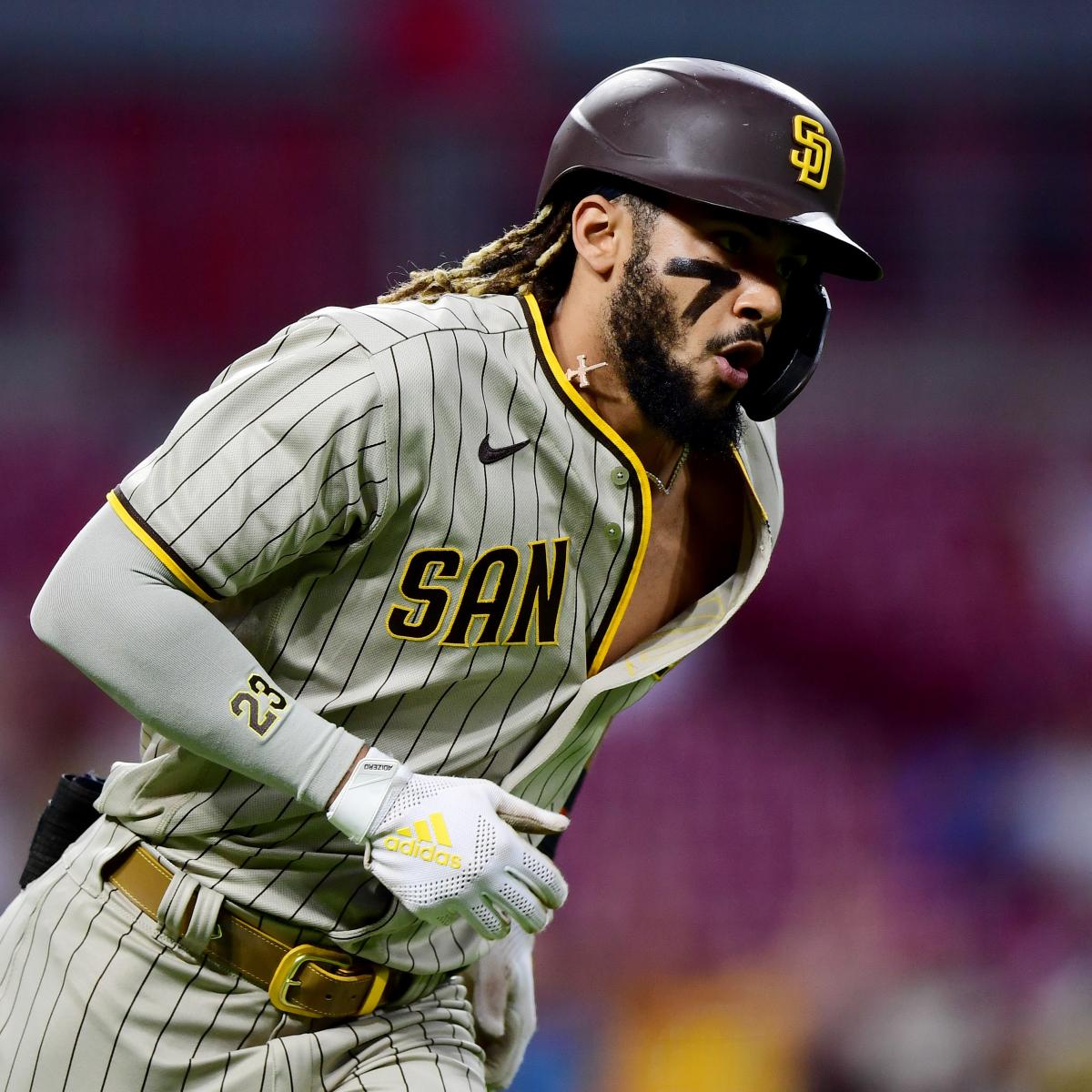 MLB Player Rankings for the Top 25 Shortstops of 2021 Season

Throughout the year, we released monthly updates to our position-by-position power rankings, selecting the top 10 players at each spot. Now it’s time to finalize those rankings while expanding the list out to the 25 best at each position on the diamond, which means each position is going to get its own article.

Just like the regular-season rankings, players are ranked solely on the 2021 season. Past production and future expectations played no part in deciding the order.

To qualify for inclusion, a player had to have at least 200 plate appearances. Each player was included in the rankings at the position where he played the most innings.

Let’s keep our 2021 MLB Player Rankings series rolling with a look at the top 25 shortstops.

Among the 132 hitters who qualified for the batting title in 2021, Newman ranked dead last with an ugly 56 OPS+ as he hit .226/.265/.309 in 554 plate appearances. However, his 11.9 Defensive Value Metric led all shortstops, and he tallied 9 DRS and a 7.6 UZR/150 at the position. That is enough to earn a spot in these rankings since he plays a premium defensive position.

Torres might have seen his days as a shortstop come to an end when the Yankees decided to shift him to second base in September. The 24-year-old has struggled defensively throughout his career with minus-24 DRS at shortstop, and his offensive game has also regressed since his 38-homer season in 2019. Can he rebound from a 93 OPS+ and 0.8 WAR in 127 games?

Despite a .197 batting average and a tenuous hold on the starting shortstop job in St. Louis that left him watching from the sidelines in the NL Wild Card Game, DeJong was still a 1.6 WAR player in 2021 thanks to his power (19 HR) and defense (6 DRS, 6.4 UZR/150). He is still owed another $17.3 million over the next two years.

Originally a Texas Rangers prospect, Urias spent five seasons in the Mexican League before rejoining affiliated ball in 2019. The Orioles claimed him off waivers from St. Louis prior to the 2020 season, and he impressed in his first extended big league action this year. The 27-year-old hit .279/.361/.412 with 21 extra-base hits in 85 games, and he played solid defense all over the infield in a 1.9 WAR season.

A top-30 prospect in the St. Louis system for eight straight years, Sosa began 2021 as the team’s No. 28 prospect and with only 11 games of MLB action to his credit. The 25-year-old steadily played his way into a bigger role with Paul DeJong struggling, and he finished with 3.2 WAR in 113 games thanks to his contact ability and defense.

After the Reds abandoned the Eugenio Suarez shortstop experiment, Farmer took over as their everyday starter, and he caught fire in July with a .395/.456/.691 line in 90 plate appearances. The 31-year-old hit .263/.316/.416 overall with 22 doubles, 16 home runs and 63 RBI, and he provided positive defensive metrics at shortstop as well.

Acquired in the Francisco Lindor trade, Rosario began the year splitting his time between shortstop and center field, but he eventually seized control of the everyday shortstop job and No. 2 spot in the lineup. The 25-year-old hit .309/.339/.457 with 24 extra-base hits in 61 games after the All-Star break, and he finished with 1.9 WAR in a season that could pave the way to a bigger breakout in 2022.

Rojas missed time early with a dislocated finger, but he eventually returned to his post as the everyday shortstop and veteran leader. He led the Marlins in hits (131) and doubles (30), and he tallied a career-high 194 total bases. The 32-year-old was a 2.6 WAR player in 132 games, and Miami signed him to a two-year, $10 million extension in October.

A catcher when he began his MLB career and the AL Gold Glove winner at third base last year, Kiner-Falefa shifted into the everyday shortstop role after the Rangers traded longtime starter Elvis Andrus to Oakland last offseason. He hit .271/.312/.357 with 36 extra-base hits, 20 steals and 3.7 WAR, and he was a standout defender (11 DRS, 1.1 UZR/150) at shortstop.

Signed to a massive 10-year, $341 million extension after he was acquired from Cleveland during the offseason, Lindor fell flat in his first season in a Mets uniform. A down season by his standards still meant a 101 OPS+ with 20 home runs, 10 steals and 3.1 WAR while being named a Gold Glove finalist, but far more was expected after his stellar run in Cleveland.

The AL Gold Glove winner at shortstop in 2021, Crawford had the best offensive season of his career this season. The 26-year-old posted a 102 OPS+ with 37 doubles and 89 runs scored as Seattle’s primary leadoff hitter, and he was rock solid with his glove (8 DRS) once again as well. It has taken some time, but he’s starting to live up to his former top prospect status.

Franco was a 3.5 WAR player in only 70 games in his MLB debut, which extrapolates out to an 8.1 WAR showing over a full 162 games. Baseball’s top prospect took some time to find his footing, but he finished with a 129 OPS+ and 30 extra-base hits in 308 plate appearances, ripping off a 43-game on-base streak along the way. Superstardom is right around the corner.

Against all odds, Story stayed put at the trade deadline in what will almost certainly be his final season in a Rockies uniform with free agency awaiting this winter. The 28-year-old got off to a slow start, but he posted an .899 OPS over the final two months of the season, finishing the year with 34 doubles, 24 home runs, 20 steals and 4.2 WAR.

After hitting a pedestrian .201/.286/.266 for a 51 OPS+ in 2020, Nicky Lopez was entering a make-or-break season. Many expected veteran Hanser Alberto to steal the majority of playing time at second base.

However, an injury to Adalberto Mondesi opened the door for Lopez to step into the starting shortstop job, and he thrived on both sides of the ball.

Javier Baez finished the 2021 season on a high note following his trade to the New York Mets. That should give his free-agency stock a nice shot in the arm as he negotiates a new contract.

His spike in production following the trade has helped vault him into the top 10:

The end result was a 117 OPS+ with 31 home runs to go along with an NL-leading 184 strikeouts. Coupled with his dynamic defensive game at shortstop and terrific baserunning instincts, he was a 4.6 WAR player in 138 games.

Similar to Javier Baez, it was a tale of two seasons for Willy Adames. He had middling numbers prior to his trade to the Milwaukee Brewers and MVP-caliber production afterward.

The Tampa Bay Rays dealt the 26-year-old on May 21 to help clear a path for top prospect Wander Franco. He was a non-factor offensively before the trade, but he made a big impact in the final few months of the season:

The Brewers were 21-23 prior to Adames playing his first game with the team, and they were 74-44 after he debuted en route to an NL Central title.

He is controllable through the 2024 season and is now a central figure in the Brew Crew’s long-term plans.

Tim Anderson doesn’t get on base at a great rate, and he’s an average defender at best, but he can flat-out hit.

Anderson’s .322 batting average since the start of the 2019 season leads all players with at least 500 plate appearances during that span, and he has become the heart and soul of the contender being built on the South Side.

Xander Bogaerts has been one of baseball’s best offensive shortstops for several years running, with a 133 OPS+ dating back to the start of the 2018 season.

The 29-year-old has posted below-average defensive metrics throughout his career, and he provided minus-5 DRS in 2021. With that said, his 2.3 UZR/150 was the second-best mark of his career, and he is by no means a liability at the position.

Bo Bichette had played only 75 games at the big league level prior to the 2021 season, but he had already shown flashes of stardom.

At 23 years old, he racked up a career-high 5.9 WAR in 159 games. And while he isn’t a Gold Glove-level defender, he has been much better than expected at shortstop after many believed he would need to move off the position during his time in the minors.

It looked like Brandon Crawford was coming to the end of the line as a starting shortstop in 2019 when he struggled to a .228/.304/.350 line and seemed to lose a step defensively en route to an ugly minus-0.5 WAR season.

He rebounded with a 115 OPS+ and 1.3 WAR in 54 games during the shortened 2020 season, and that resurgence was the springboard for arguably the best season of his career this year.

The Giants signed Crawford to a two-year, $32 million extension in August as he wrapped up the final season of a six-year, $75 million deal.

Fernando Tatis Jr. made 10 errors in his first 16 games this year. While he made only 11 more miscues in his final 114 games, detractors were quick to point to his error total when arguing that he did not belong among the game’s elite.

Despite those shortcomings and a nagging shoulder injury, he was still a 6.6 WAR player in 130 games. According to the Offensive Value Metric at FanGraphs, only Vladimir Guerrero Jr., Bryce Harper and Juan Soto provided more overall value at the plate and on the bases.

Tatis saw some time in the outfield late in the year in an effort to rest his shoulder, and with top prospect CJ Abrams expected to arrive at some point in 2022, his long-term future could be in the grass. Regardless, there are few players in baseball with a more dynamic skill set.

Trea Turner spent the final few months of the season playing second base with the Los Angeles Dodgers, but he played more games at shortstop (98) than second (49) over the course of the season, so this is where he is slotted in our rankings.

The 28-year-old now appears to be the long-term answer at shortstop for the Los Angeles Dodgers with Corey Seager entering free agency, and his budding power production has made him one of the most well-rounded players in baseball.

Carlos Correa was tops among shortstops with a career-high 7.3 WAR, and that total trailed only Shohei Ohtani (9.0) and Zack Wheeler (7.7) among all players in terms of overall value in 2021.

The 27-year-old has finally shaken the injury bug that plagued him early in his career, playing in 206 of 222 games for the Houston Astros since the start of last year.

The rocket-armed shortstop tied with Pittsburgh Pirates catcher Jacob Stallings for the MLB lead with an impressive 21 DRS, earning his first AL Gold Glove Award in the process.

His age, offensive production and two-way value make him the top player in this year’s free-agent class, and the No. 1 shortstop of 2021.

All stats courtesy of Baseball Reference and FanGraphs.

Denial of responsibility! NewsUpdate is an automatic aggregator around the global media. All the content are available free on Internet. We have just arranged it in one platform for educational purpose only. In each content, the hyperlink to the primary source is specified. All trademarks belong to their rightful owners, all materials to their authors. If you are the owner of the content and do not want us to publish your materials on our website, please contact us by email – [email protected]. The content will be deleted within 24 hours.
best sports newsMLBnews update sportsnewsupdatePlayerrankingsSeasonShortstops

Walmart drone delivery service expands – here’s who can use it