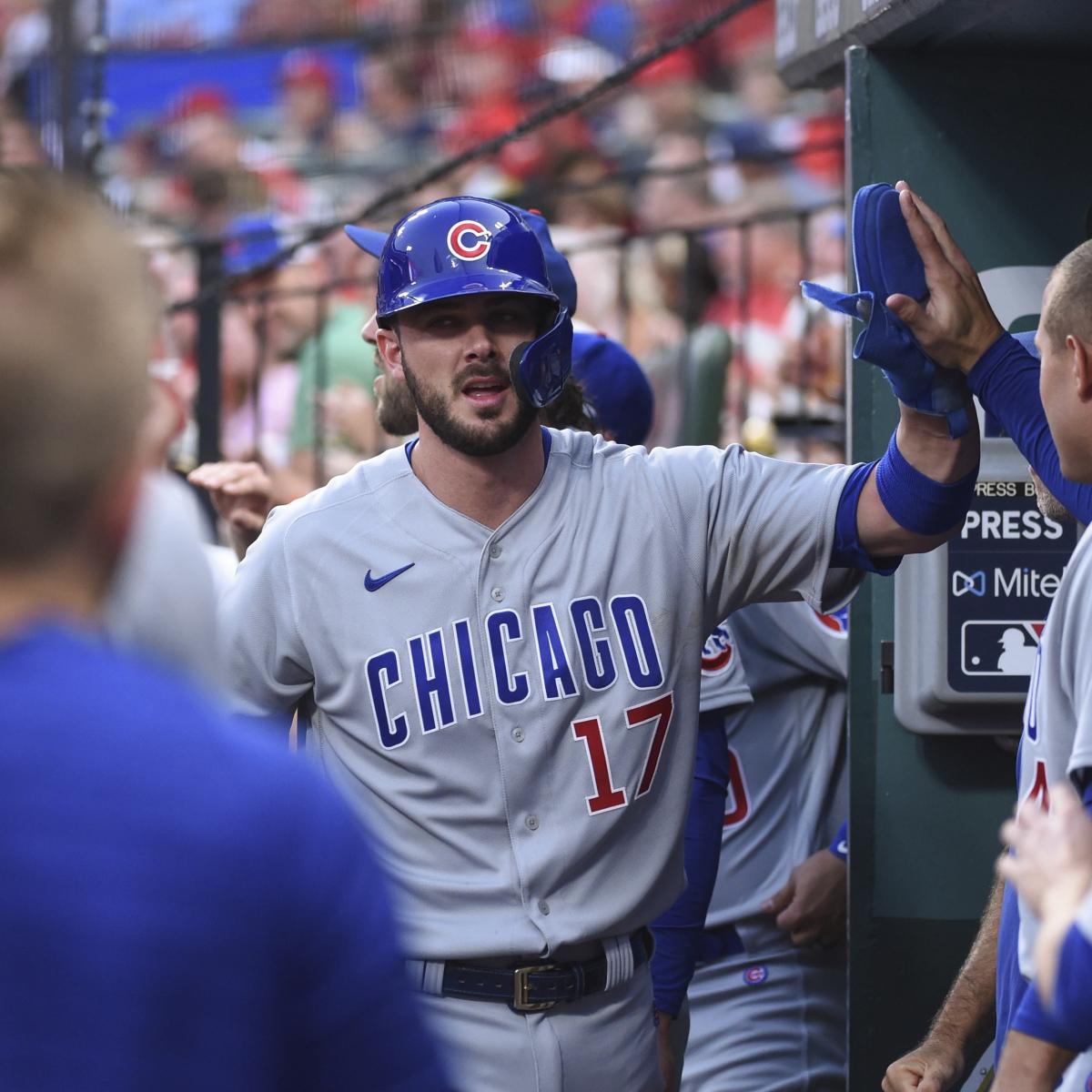 The Chicago Cubs could be a swing team when it comes to the trade assets they have and which teams they might deal said assets to ahead of the July 30 deadline.

Closer Craig Kimbrel will surely be in high demand as arguably the best reliever on the market. Shortstop Javier Baez is a defensive whiz and has a .932 OPS in the last four weeks. He will be a free agent at the end of the season. The same goes for first baseman Anthony Rizzo, who could generate interest if he’s made available.

However, all eyes figure to be on Kris Bryant, a former National League MVP who might be playing his final games in a Cubs uniform.

Here is the latest on Bryant, as well as veteran slugger Nelson Cruz and a budding superstar in Pittsburgh.

Kris Bryant is a guy who can help numerous contenders.

His numbers have fallen in the last couple of months, but he is a guy who works good at-bats and can hit for power (.834 OPS) while also being an asset on the bases. He can also play multiple positions.

The 29-year-old has played all three outfield positions and both corner infield spots. That defensive versatility gives him the feel of somebody who could help a lot of teams.

For those reasons—not to mention the fact that Bryant will be a free agent and could command a big deal this winter—ESPN’s Jeff Passan reported he is “good as gone.”

Passan noted just about every team in the National League East could use Bryant on the roster. Indeed, Pat Raggazo of Sports Illustrated‘s FanNation reported the New York Mets are “focused” on adding a player of his caliber. Jon Heyman of MLB Network said the Washington Nationals are another NL East club with an interest.

Teams in the NL East likely won’t be alone in pursuing Bryant, though. The San Francisco Giants could also get involved. Other teams might have the Cubs star in their periphery.

Chicago will do its due diligence. Perhaps retaining Bryant and re-signing him in the offseason is still an option. However, his market appears to be pretty plentiful, making it all the more likely a Cubs team looking for young assets chooses to trade him.

Minnesota Twins designated hitter Nelson Cruz’s bat is so prolific that some teams are interested in seeing whether he can play the field again.

Cruz, once an outfielder, is garnering attention from National League clubs, according to Jeff Passan. However, he hasn’t played in the field in three years and, maybe more notably, he is 41 years old. First base might seem like an option, but that could be a tough midseason switch at a difficult position to learn.

He is more likely to be traded to another American League team, with the Tampa Bay Rays looking like a strong fit. Ken Rosenthal of The Athletic reported their interest is “legitimate” despite the fact that it would force Austin Meadows into one of the outfield spots and lessen the Rays’ team defense.

Still, Cruz almost makes too much sense for Tampa Bay. The Rays are left-handed heavy and don’t get a ton of pop from their right-handed hitters outside of Mike Zunino. Meanwhile, Cruz is hitting .295 with 19 homers and a 910 OPS.

The Rays have a deep prospect pool to trade from. They could surely pique the Twins’ interest, though plenty of other clubs could use Cruz’s bat.

The Pittsburgh Pirates will be sellers ahead of the deadline.

Utility man Adam Frazier should be a popular target, and closer Richard Rodriguez figures to move. However, the Bucs have no interest in trading All-Star outfielder Bryan Reynolds.

Ken Rosenthal of The Athletic reported the Pirates “intend to build around” the 26-year-old, who is under club control for four more years. He will be off-limits, regardless of the price contenders are willing to pay.

Reynolds has looked like a cornerstone player this season. He is hitting .301 with 17 homers and a .900 OPS while also ranking 16th in weighted runs created plus (wRC+). He also has good speed and has played terrific defense, ranking in the 95th percentile in outs above average.

The Pirates might still be in the early stages of their rebuild, but the Baltimore native is regarded as a centerpiece in that rebuild. He will likely stay in Pittsburgh through July 30.

All stats obtained via Baseball Reference, FanGraphs or Baseball Savant, unless otherwise noted. Stats are accurate prior to the start of play on July 21.

Denial of responsibility! NewsUpdate is an automatic aggregator around the global media. All the content are available free on Internet. We have just arranged it in one platform for educational purpose only. In each content, the hyperlink to the primary source is specified. All trademarks belong to their rightful owners, all materials to their authors. If you are the owner of the content and do not want us to publish your materials on our website, please contact us by email – [email protected]. The content will be deleted within 24 hours.
Loading...
Loading...
best sports newsBryantCruzKrisLatestMLBNelsonnews update sports