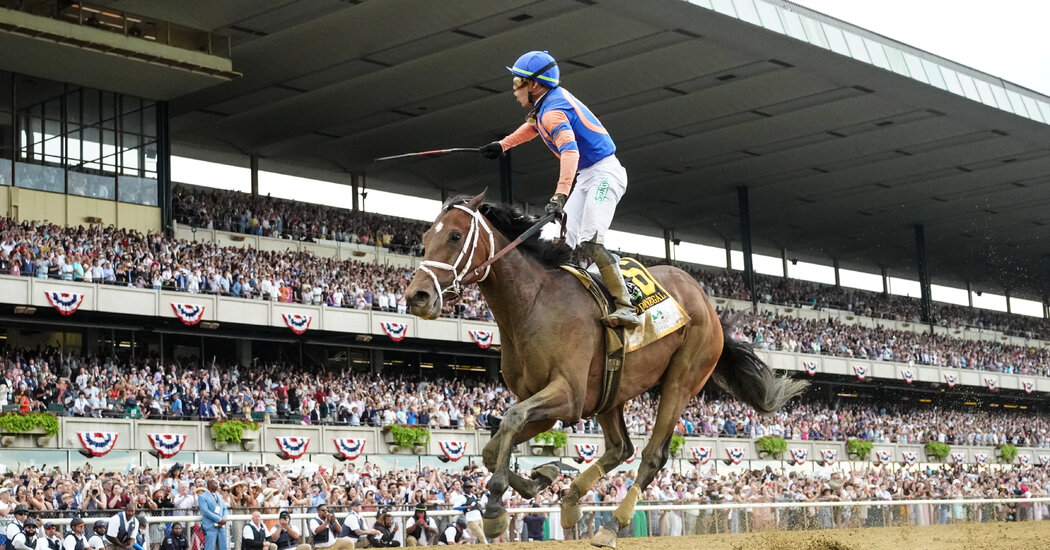 This article will be updated.

Rich Strike, who thrilled racing fans with a storybook win at the Kentucky Derby, could not add the Belmont Stakes to his résumé on Saturday as Mo Donegal, the favorite at post time, narrowly won the 154th running of what is known as the Test of the Champion.

Mo Donegal, ridden by Irad Ortiz Jr. and trained by the Hall of Fame trainer Todd Pletcher, paid $7.20 for a $2 bet and earned an $800,000 for owners Donegal Racing. He had finished fifth at the Kentucky Derby.

Nest, a filly, finished second, and Skippylongstocking was third.

Rich Strike ran in the back of the pack and finished sixth. He was ridden again by Sonny Leon, the little known jock from the grits and hard toast circuit who had thrown down a masterpiece of big-time race riding at Churchill Downs — a swerving, rail-skimming trip worthy of a tear of appreciation from the Mona Lisa.

Uplifting stories have been hard to come by in America’s oldest sport these days. Bob Baffert, who trained Medina Spirit — last year’s Derby winner until he was disqualified for failing a post race drug test — had kept horse racing in the news by contesting the penalty. In April, Baffert was sidelined for the Triple Crown by a 90-day suspension from Kentucky regulators.

The unlikely victory of Rich Strike at the Kentucky Derby last month captivated sports fans who were taken by the colt’s humble beginnings. He was bought for $30,000 out of a claiming race by an owner who had only one horse in training: Rich Strike. Eric Reed, the horse’s trainer, and Leon were accomplished horsemen who had won plenty of races but weren’t widely known because their successes came mostly at the casino racetracks in Ohio, Kentucky and West Virginia.

Two weeks later at the Preakness, order was restored when Early Voting, owned by the hedge fund investor Seth Klarman, repelled the challenge of the heavily favored Epicenter to capture the 147th running of the Preakness Stakes.

Denial of responsibility! NewsUpdate is an automatic aggregator around the global media. All the content are available free on Internet. We have just arranged it in one platform for educational purpose only. In each content, the hyperlink to the primary source is specified. All trademarks belong to their rightful owners, all materials to their authors. If you are the owner of the content and do not want us to publish your materials on our website, please contact us by email – [email protected]. The content will be deleted within 24 hours.
Belmontbest sports newsclosingcrownDonegalnews update sportsnewsupdateSeason