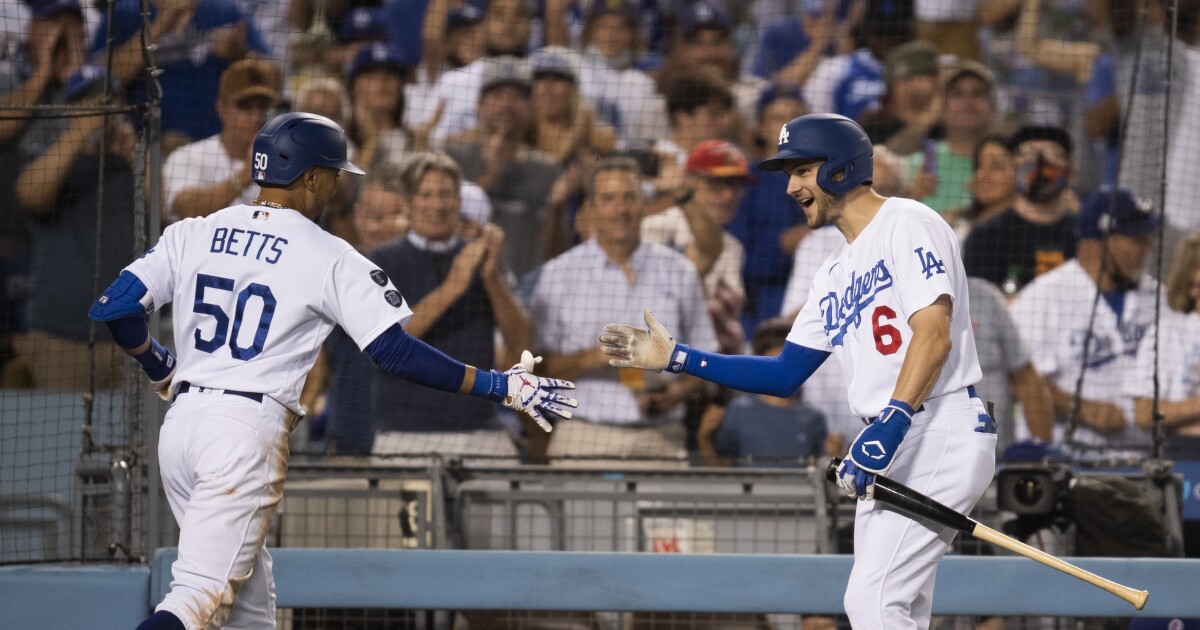 Trea Turner has been with the Dodgers for only six weeks, and he’s already running out of bandwidth to accommodate questions about the San Francisco Giants, the National League West leaders who never seem to lose.

Asked on Saturday how the Dodgers can close the gap on their division rivals, the second baseman, acquired from the Washington Nationals on July 30, launched into his answer before a reporter completed his question.

“Stop talking about them,” Turner said. “I’ve heard so much about the Giants for the last month and a half. You focus on what’s in front of you, and unless you’re playing them, they’re not in front of you.”

The Giants were not in front of the Dodgers on Saturday night, having completed their 19-game season series against them last weekend in San Francisco.

The San Diego Padres were, and the Dodgers swatted them aside with a 5-4 victory before 46,969 in Chavez Ravine to remain 21/2 games behind the Giants with 19 games left.

Walker Buehler rebounded from last Sunday’s three-inning, six-run clunker in San Francisco with a stout seven-inning, two-run, six-hit effort to improve to 14-3 with a 2.32 ERA, Mookie Betts hit a huge tie-breaking, three-run homer in the fifth and Joe Kelly escaped a runner-on-third, one-out jam in the eighth.

The Dodgers had a 5-2 lead when setup man Blake Treinen hit Adam Frazier with a pitch to open the eighth. Frazier stole second and scored on Manny Machado’s RBI single to center.

Tatis took third on Eric Hosmer’s groundout but was stranded when Kelly replaced Treinen and struck out Wil Myers and Tommy Pham, both with nasty knuckle-curves after setting them up with upper-90s fastballs, to snuff out the rally. Kenley Jansen threw a one-two-three ninth for his 32nd save.

“It speaks to the depth of our team,” Buehler said of Kelly’s escape act. “Blake has been unbelievable for us all year, and for Joe to come in and pick him up is huge for us. When Joe Kelly is healthy, he’s pretty electric, and he showed that tonight.”

The Dodgers needed to win just to keep pace with the Giants, who beat the Chicago Cubs 15-4 to win their sixth straight and improve to 92-50. The Dodgers (90-53), who have won two straight over the Padres despite having only four hits in each game, own the second-best record in baseball.

“They’ve played some historic baseball — you can’t knock that,” Turner said. “It’s not like we haven’t done enough. They’ve just done really well, so you tip your cap, and you keep playing.”

The Dodgers took a 2-0 lead in the third inning when slumping center fielder Cody Bellinger drew a leadoff walk from Padres starter Chris Paddack and scored on Gavin Lux’s double to left.

Lux took third on Buehler’s sacrifice bunt and scored on Betts’ sacrifice fly to center. Three batters into the fourth, the lead was gone.

Machado hit a one-out single and Tatis drove a first-pitch slider from Buehler over the center-field wall for his NL-leading 38th homer and eighth against the Dodgers, the most any Padres player has hit against the Dodgers in a single season.

Paddack got the first two outs of the fifth before giving up a single to Lux and walking Buehler on four pitches. Paddack was pulled in favor of right-hander Craig Stammen, whose first pitch, a 93-mph sinker, was slammed by Betts over the wall in left-center for a three-run homer — his 20th of the season—and a 5-2 lead.

“He’s been really good keeping it out of the middle of the plate, so I know I need to be ready to swing, because if you fall behind someone like him, you can get yourself in a little bit of trouble,” Betts said of Stammen, who has his 111/3-inning scoreless string snapped. “So I was just ready to hit.”

Danny Duffy, a left-hander whom manager Dave Roberts touted as a possible “two-inning monster,” in September and October, aggravated his elbow injury during Friday’s bullpen session, and his chances of pitching this season appear remote. “It doesn’t look great,” Roberts said. “Outside of any type of miracle, for him to impact us this year, it’s going to be tough.” … Max Scherzer will take the mound on Sunday needing six strikeouts to become only the 19th player in major league history with 3,000 career strikeouts.

Denial of responsibility! NewsUpdate is an automatic aggregator around the global media. All the content are available free on Internet. We have just arranged it in one platform for educational purpose only. In each content, the hyperlink to the primary source is specified. All trademarks belong to their rightful owners, all materials to their authors. If you are the owner of the content and do not want us to publish your materials on our website, please contact us by email – [email protected]. The content will be deleted within 24 hours.
Loading...
best sports newsBettsbigDodgersJoeKellyMookienews update sports