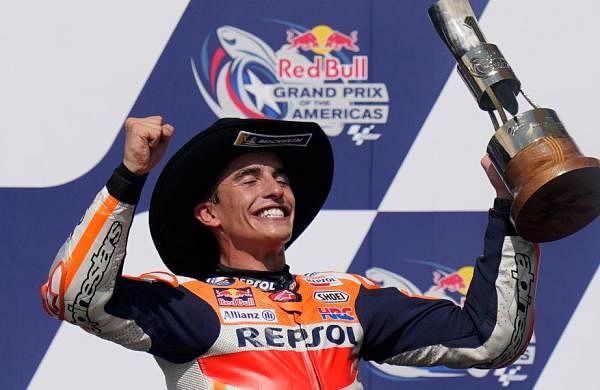 AUSTIN: Amid a season of self-described suffering, Marc Marquez was all smiles as he returned to his winning form in Texas.

The Repsol Honda rider dialed up his old speed for a dominant victory at the MotoGP Grand Prix of the Americas on Sunday, while championship leader Fabio Quartararo coasted to second and further tightened his grip on a likely first career title.

Marquez missed most of the 2020 season after a bad arm and shoulder injury in the first race, and he has struggled this year to find the combination of speed and delicate driving balance that won him six career championships.

The return to the Circuit of the Americas, which rewards the pure power of the Honda engine, was just what he needed. His seventh win in eight races at the Texas track earned Marquez his second victory and third podium finish of this season.

Marquez also got career win No. 58. “Today, everybody is happy. I get the win and Fabio is in second,” Marquez said. Second is exactly what Quartararo planned for. While he finished more than four seconds behind Marquez, it was more important for the Yamaha rider’s title hopes that he avoid any big mistakes and finish ahead of Ducati’s Francesco Bagnaia.

“It was the best second place of my career. It was great to finish in front of him on this track. I’m really happy with my result,” Quartararo said.

Marquez started from the No. 3 spot – his first start of the season from the front row of the grid  and shot past Quartararo and Bagnaia so quickly he was in the lead by the time they were driving into the first turn.

Once in front, Marquez was never challenged. “The plan was executed: Be first to the first corner,” he said. With his lead growing lap by lap, all Marquez had to do was avoid an unforced error like the one that caused his late crash here in 2019 that denied him a victory.

He acknowledged narrowly escaping a similar mishap on Sunday. “It was on my mind, I tried to be very careful. With three laps to go, I almost crashed …This season has been very hard and strange. I need to keep working, keep pushing. The special feeling is still not there on the bike,” Marquez said.

The race was a quiet one for Quartararo, who seemed happy to watch Marquez drive off in the distance as he settled in for a ride that protected his championship lead. Bagnaia, who had won the two previous races from pole position, started there again but dropped as low as sixth in the early going and never threatened to overtake Quartararo. “Fabio this year has done a great job,” Bagnaia said.

Denial of responsibility! NewsUpdate is an automatic aggregator around the global media. All the content are available free on Internet. We have just arranged it in one platform for educational purpose only. In each content, the hyperlink to the primary source is specified. All trademarks belong to their rightful owners, all materials to their authors. If you are the owner of the content and do not want us to publish your materials on our website, please contact us by email – [email protected]. The content will be deleted within 24 hours.
AmericanAmerican Grand Prixbest sports newsdeliversDominantFabio QuartararoGrandMarc