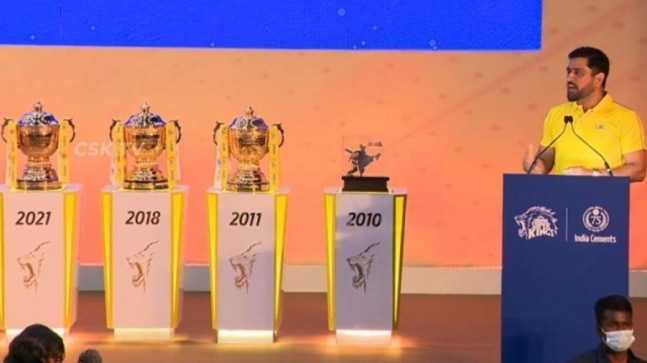 MS Dhoni on his CSK future: My last T20 will hopefully be in Chennai, I have always planned my cricket

Chennai Super Kings captain MS Dhoni reiterated that he wants to play his final T20 in Chennai as he opened up on his future plans as a cricketer during an event in Tamil Nadu’s capital.

Chennai Super Kings captain Mahendra Singh Dhoni once again touched upon the topic of his future plans in cricket and how long he wants to continue leading the defending Indian Premier League (IPL) champions after picking up his fourth trophy earlier this year in the United Arab Emirates.

40-year-old Dhoni is in the final stage of his cricket career but he’s not yet sure how long he will continue playing in the IPL. ‘Thala’ though, did reiterate that he wants to play his final T20 in Chennai.

“I will think about it, there is a lot of time, right now we are just in November. IPL 2022 will be played in April,” Dhoni said during an event in Chennai.

“I have always planned my cricket. You know my last game that I played, was in Ranchi. (In) the ODI version, the last home game was at my hometown in Ranchi. So hopefully, my last T20, it will be in Chennai. Whether it’s next year, or in five years’ time, we don’t really know,” Dhoni said while addressing the attendees at Saturday’s event.

“A promise from #Thala…” tweeted CSK while sharing a brief video of the speech.

The former India captain has stated last month that he wants to play his farewell game in Chennai, a city where Dhoni is treated like a demigod by cricket fans.

Dhoni promised fans that they will be able to bid farewell to him after having announced his retirement from international cricket on August 15, 2020 in an unforeseen manner.

Dhoni has not played in Chennai since IPL 2019 as the following season was held in the UAE. CSK did not play in Chennai in the first leg of IPL 2021 and the remainder of the season was moved out of India due to Covid-19 concerns.

“When it comes to farewell, you can still come and se play me for CSK and that can be my farewell game. So, you will still get that opportunity to bid me farewell.

“Hopefully, we will come to see Chennai and play my last game over there and we can meet fans there,” Dhoni said while interacting with fans during the 75th year celebrations of India Cements in October.

Denial of responsibility! NewsUpdate is an automatic aggregator around the global media. All the content are available free on Internet. We have just arranged it in one platform for educational purpose only. In each content, the hyperlink to the primary source is specified. All trademarks belong to their rightful owners, all materials to their authors. If you are the owner of the content and do not want us to publish your materials on our website, please contact us by email – [email protected]. The content will be deleted within 24 hours.
best sports newsChennaiCricketCSKDhonifuturenews update sportsnewsupdate