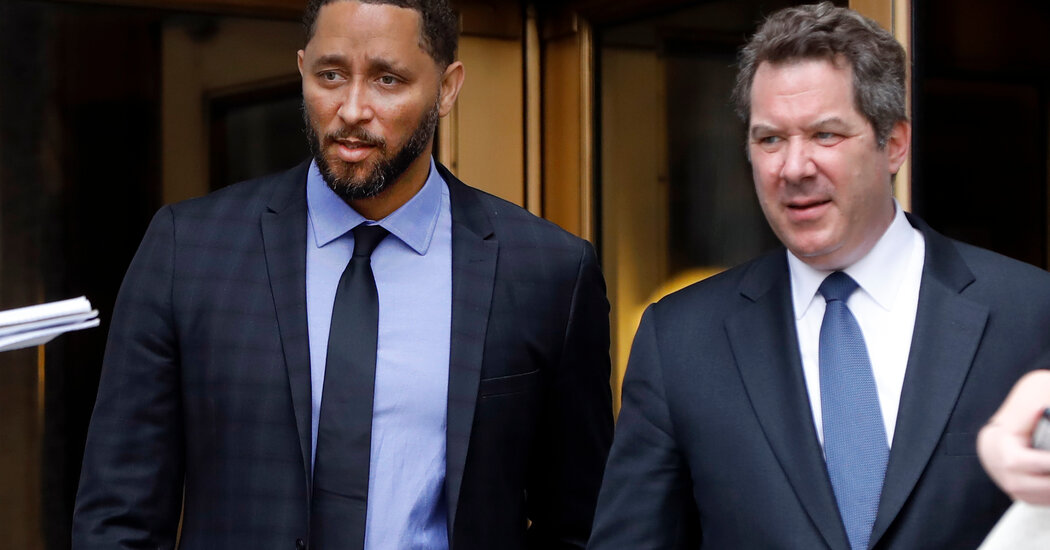 A N.C.A.A. disciplinary committee on Thursday put the University of Southern California men’s basketball program on two years’ probation and fined it $5,000, plus 1 percent of the program’s budget, over the actions of a former associate head coach who accepted a bribe from a sports management company for players with N.B.A. potential.

Tony Bland, the former associate head coach, was fired by the university in January 2018 and pleaded guilty to conspiracy to commit bribery in U.S. District Court in 2019, acknowledging he had accepted a $4,100 bribe from a sports agent in exchange for promising to direct players to a Las Vegas management company. The N.C.A.A. committee’s decision restricts Bland from working in college athletics for three years without the N.C.A.A.’s approval, which is the harshest punishment a coach can receive.

“The associate head coach demonstrated a recurring lack of judgment that resulted in unethical conduct and representation violations for both himself and U.S.C.,” the 24-page decision released by the N.C.A.A. committee read. “Although his behavior may have originated out of a friendship with the agent associate, it waded into murky ethical waters and ultimately intersected with the agent associate’s corruption scheme within college basketball.”

Bland, who joined the Trojans’ program under Coach Andy Enfield in 2013, admitted that he took the bribe in a July 2017 meeting with representatives from a sports management agency in Las Vegas. Recordings of the meeting used as evidence in the case showed that Bland boasted that he could convince student-athletes to become clients of the company. In a meeting near the Trojans’ basketball arena a month later, Bland reiterated that he could “definitely get the players and put them in the lap of you guys,” according to government recordings of the meeting.

He was arrested in September 2017 along with coaches from several athletic programs implicated by the Federal Bureau of Investigation’s inquiry.

“I knew my conduct was wrong,” Bland said while entering his guilty plea in January 2019. He was sentenced to two years of probation and 100 hours of community service.

The sports management leaders, Christian Dawkins, an aspiring agent, and a former Adidas employee, Merl Code Jr., were found guilty of conspiracy to commit bribery in 2019 in connection with payments made to Bland and other coaches to try to convince players to sign with their fledgling agency. In a separate trial in 2018, they were found guilty, along with another former Adidas employee, James Gatto, of wire fraud and conspiracy to commit wire fraud in funneling money to college basketball recruits’ families.

More than a dozen programs were implicated in the investigation, with some of the cases still unresolved. Alabama and South Carolina received similar punishments to U.S.C.’s. Oklahoma State was handed a one-year postseason ban in addition to fines and loss of scholarships in June 2020; the program appealed the decision and played in the 2021 N.C.A.A. men’s basketball tournament.

U.S.C.’s probation lasts until April 14, 2023 and along with the $5,000 fine, the school must also pay 1 percent of the basketball program’s budget. University officials had self-prescribed punishments of limiting the program’s scholarships, official visits and recruitment days in the 2019 academic year.

Bland operated on his own without the knowledge of any other university or athletics personnel, the N.C.A.A. committee noted, adding that university officials and Bland cooperated with the punishments.

“We are thrilled this matter is now behind us,” Mike Bohn, the university’s athletic director, said in a statement on Thursday, “and our focus remains on being the most student-athlete centered program in the country.”

Denial of responsibility! NewsUpdate is an automatic aggregator around the global media. All the content are available free on Internet. We have just arranged it in one platform for educational purpose only. In each content, the hyperlink to the primary source is specified. All trademarks belong to their rightful owners, all materials to their authors. If you are the owner of the content and do not want us to publish your materials on our website, please contact us by email – [email protected]. The content will be deleted within 24 hours.
Basketballbest sports newsBriberycaseFinesMensNCAAnews update sports