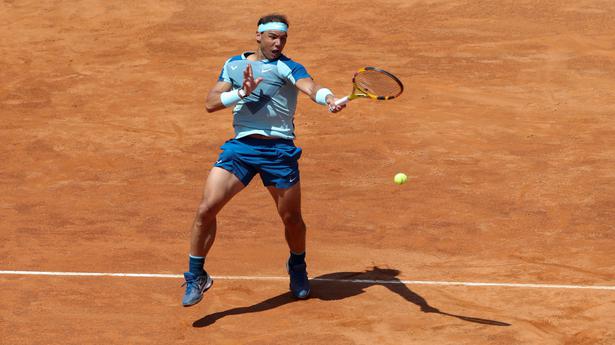 Rafael Nadal, who has never lost consecutive matches on clay, beat Isner 6-3, 6-1 to reach the third round of the Italian Open

Rafael Nadal, who has never lost consecutive matches on clay, beat Isner 6-3, 6-1 to reach the third round of the Italian Open

Once is enough when it comes to beating Rafael Nadal on a clay court. Throughout his career, Nadal has never lost consecutive matches on his favorite surface and the Spaniard extended that perfect record on Wednesday by beating John Isner 6-3, 6-1 to reach the third round of the Italian Open.

Rafael Nadal was coming off a loss to 19-year-old Carlos Alcaraz in the Madrid Open quarterfinals last week. After a first-round bye, he improved to 44-0 in matches on clay following a loss on the surface.

Perhaps more importantly, Rafael Nadal regained some confidence as he works his way back from a rib stress fracture that kept him out for six weeks before the tournament in Madrid.

While he would clearly love to add to his record total of 10 Italian Open titles, Nadal’s bigger objective is regaining his top form in time for the French Open, which starts in less than two weeks. Rafael Nadal has won 13 of his 21 Grand Slam titles at Roland Garros.

When the match finished, Nadal headed straight to the practice court to hit more balls. He explained that he’s a “bit in a rush” to find his best form “as soon as possible.”

“I need to work as much as I can,” Nadal said. “The match today was not that demanding physically.”

It was essentially decided during one brief stretch.

Rafael Nadal struggled on his serve at 3-3 in the first set, missing a forehand into the net then double-faulting to set up break points for Isner. But the American made unforced errors on both of his break-point opportunities and Nadal eventually held.

“I finished better than I started—without a doubt,” Nadal said. “He had some chances on the returns. I was in his hands in that moment. Lucky that he missed those shots.”

Rafael Nadal improved to 19-0 against Americans on clay, having been forced to a deciding set only twice—both times by Isner, who pushed Nadal to five sets at the 2011 French Open and three sets at the 2015 Monte Carlo Masters.

Up next, Rafael Nadal meets Denis Shapovalov, the Canadian he beat at the same stage last year in a grueling three-set comeback victory in which the Spaniard saved two match points.

“Super lucky,” Nadal said, reflecting back to playing Shapovalov last year. “I know how dangerous he is. I need to play better than today.”

Three-time Grand Slam champion Stan Wawrinka, playing only his second tournament after more than a year out following two surgeries on his left foot, edged Laslo Djere 7-6 (8), 3-6, 6-4 to set up a meeting with top-ranked Novak Djokovic.

“It’s going to be really difficult for me, because I’m not ready to compete—I think—at that level,” Wawrinka said of facing Djokovic. “But it’s what I need. I need those challenges. I need to push myself as much as I can to keep improving.”

Wawrinka had loud support from a packed crowd on the picturesque Pietrangeli court, which is lined with statues.

“The reason why after two surgeries, one year out, I’m still playing tennis at 37 years old is to live those moments as much as I can,” Wawrinka said. “I’m enjoying it a lot.”

Second-seeded Alexander Zverev, who was routed by Alcaraz in the Madrid final on Sunday, beat Sebastian Baez 7-6 (6), 6-3 to end the Argentine qualifier’s eight-match winning streak.

Wearing a ribbon with the colors of Ukraine’s flag pinned to her hat, defending women’s champion Iga Swiatek extended her winning streak to 24 matches with a 6-3, 6-0 victory over Romanian qualifier Elena-Gabriela Ruse.

The top-ranked player from Poland will next face former No. 1 Victoria Azarenka, who beat Camila Osorio 6-2, 6-4.

Madrid finalist Jessica Pegula advanced when Anhelina Kalinina withdrew before their match because of an upper back injury. The American will next face third-seeded Aryna Sabalenka.

Denial of responsibility! NewsUpdate is an automatic aggregator around the global media. All the content are available free on Internet. We have just arranged it in one platform for educational purpose only. In each content, the hyperlink to the primary source is specified. All trademarks belong to their rightful owners, all materials to their authors. If you are the owner of the content and do not want us to publish your materials on our website, please contact us by email – [email protected]. The content will be deleted within 24 hours.
atp masters 1000Beatbest sports newsDefeatIga SwiatekIsneritalian openMadrid

A Union Blitzed Starbucks. At Amazon, It’s a Slog.

The Most Powerful Story ‘The Onion’ Ever Wrote