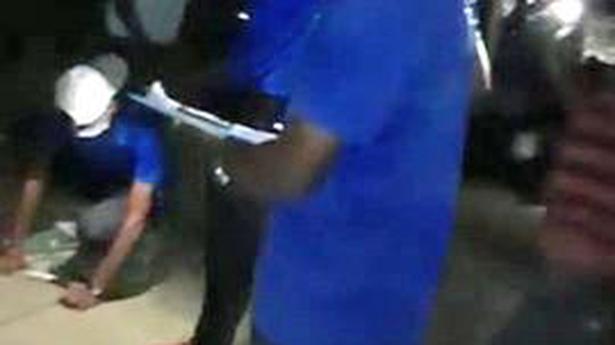 The National Para Athletics Championship slipped into fresh crisis on Wednesday after a few events at night were conducted with just mobile phone torch lights.

Officials were seen measuring shot put marks at the Sree Kanteerava Stadium with tiny flash bulbs for an event that is a qualification competition for Tokyo 2020 Paralympics.

An athlete, who wished to remain anonymous, said massive delays during the day had resulted in events slipping beyond sunset and the organisers did not use the available flood lights.

There were also allegations from athletes that international Paralympic norms were flouted in deciding the weights for events like shot put.

Neither Satyanarayana, the Bengaluru-based chairman of the Technical Committee of Paralympic Committee of India (PCI) nor Gursharan Singh, Secretary General of PCI, were available for comment.

Earlier in the day, the organisers were at the receiving end of the Sports Authority of India’s ire. SAI, in a press statement, had expressed concern that Stadia in Bengaluru at which the Championship is being held were not “wheelchair-friendly” and that COVID-19 Standard Operating Procedures like physical distancing were not being adhered to. It sought a report from the PCI regarding the same.

The PCI wrote back listing all arrangements that had been made, like the setting up of widely dispersed tents, sanitised water bottles and random COVID-19 tests.

According to PCI, distancing guidelines were breached when athletes were registering for events and that the crowd was subsequently dispersed.

To the specific concern about one of the stadia — Sree Kanteerava Stadium — not being wheelchair-friendly, PCI said that a very small patch of track under renovation could not be completed before the competition was shifted to Bengaluru from Chennai at short notice.

The PCI assured that a temporary solution will soon be found.

On day one of the competition on Wednesday, S. Gokul Srinivas of Tamil Nadu won the gold in long jump T20 category with a leap of 4.56m.

M.S. Sujith of Kerala finished first in long jump T12 category with a jump of 6.88m.

According to the PCI, no athlete secured qualification for Tokyo 2020 Paralympics.

Denial of responsibility! NewsUpdate is an automatic aggregator around the global media. All the content are available free on Internet. We have just arranged it in one platform for educational purpose only. In each content, the hyperlink to the primary source is specified. All trademarks belong to their rightful owners, all materials to their authors. If you are the owner of the content and do not want us to publish your materials on our website, please contact us by email – [email protected]. The content will be deleted within 24 hours.
athletic eventsAthleticsathletics newsbest sports newsEventsheldHitslights