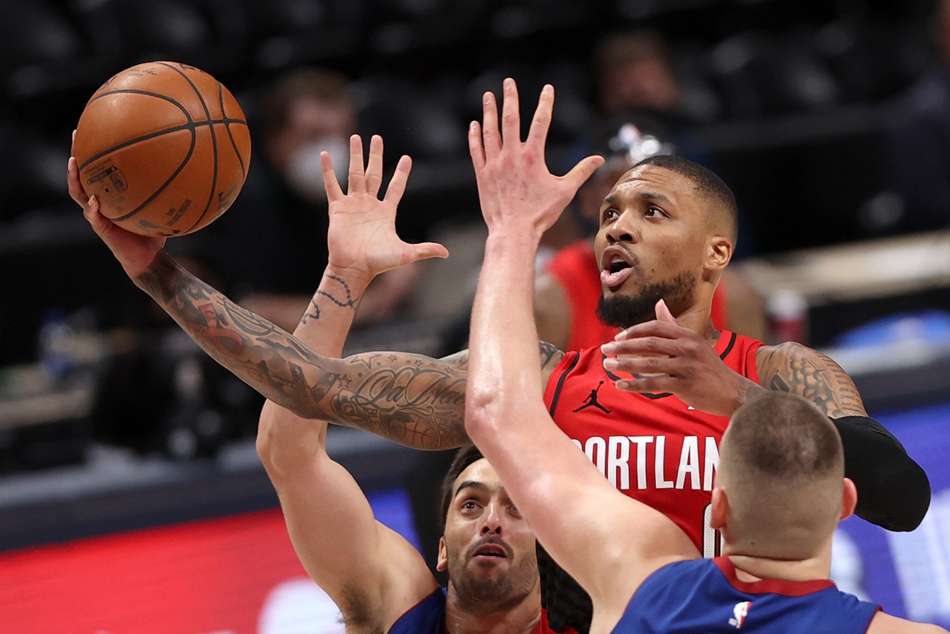 Portland outscored Denver 65-48 after the break as Damian Lillard had 34 points and 13 assists for the visitors, who made 18 of 19 free throw attempts to just four of eight for the Nuggets.

CJ McCollum added 21 points and Carmelo Anthony scored 18 in just 22 minutes off the bench for Portland, who beat the Los Angeles Lakers in their playoff opener last season only to lose the next four to the eventual champions.

Their efforts overcame a 34-point, 15-rebound game from Nikola Jokic and 25 points from Michael Porter Jr.

Porter made all 11 of his two-point field goal attempts Saturday but was just one of 10 from three-point range.

Big games from the big three carried the Brooklyn Nets to a 104-93 series-opening win over the Boston Celtics. Kevin Durant had 32 points and 12 rebounds while Kyrie Irving added 29 points and James Harden 21 as the Nets stifled the Celtics, who got 22 points on just six of 20 shooting from Jayson Tatum in a losing effort.

Luka Doncic had his third triple-double in seven career playoff games, scoring 31 points with 10 rebounds and 11 assists as the Dallas Mavericks pulled out a 113-103 road win at the Los Angeles Clippers to open their series. Tim Hardaway Jr added 21 points on eight of 13 shooting for the fifth-seeded Mavericks, while Kawhi Leonard had 26 points and Paul George 23 to lead the Clippers.

Jimmy Butler came close to recording a triple-double with 17 points, 10 rebounds and eight assists in the Miami Heat’s 109-107 overtime loss to the Milwaukee Bucks, but the five-time All-Star made only four of 22 shots from the field.

LeBron James and the Los Angeles Lakers got the win they needed in the play-in tournament and they will open the playoffs proper with Game 1 of their best-of-seven series against the second-seeded Suns in Phoenix.

Denial of responsibility! NewsUpdate is an automatic aggregator around the global media. All the content are available free on Internet. We have just arranged it in one platform for educational purpose only. In each content, the hyperlink to the primary source is specified. All trademarks belong to their rightful owners, all materials to their authors. If you are the owner of the content and do not want us to publish your materials on our website, please contact us by email – [email protected]. The content will be deleted within 24 hours.
best sports newsBlazersCelticshandleNBANetsnews update sportsnewsupdate

This is the best thing about driving an electric car

23 Russians allowed to compete as neutrals

Magic News: Who Experts Expect Team to Select With No. 1…

Wrong, Elon Musk: The big problem with free speech on…