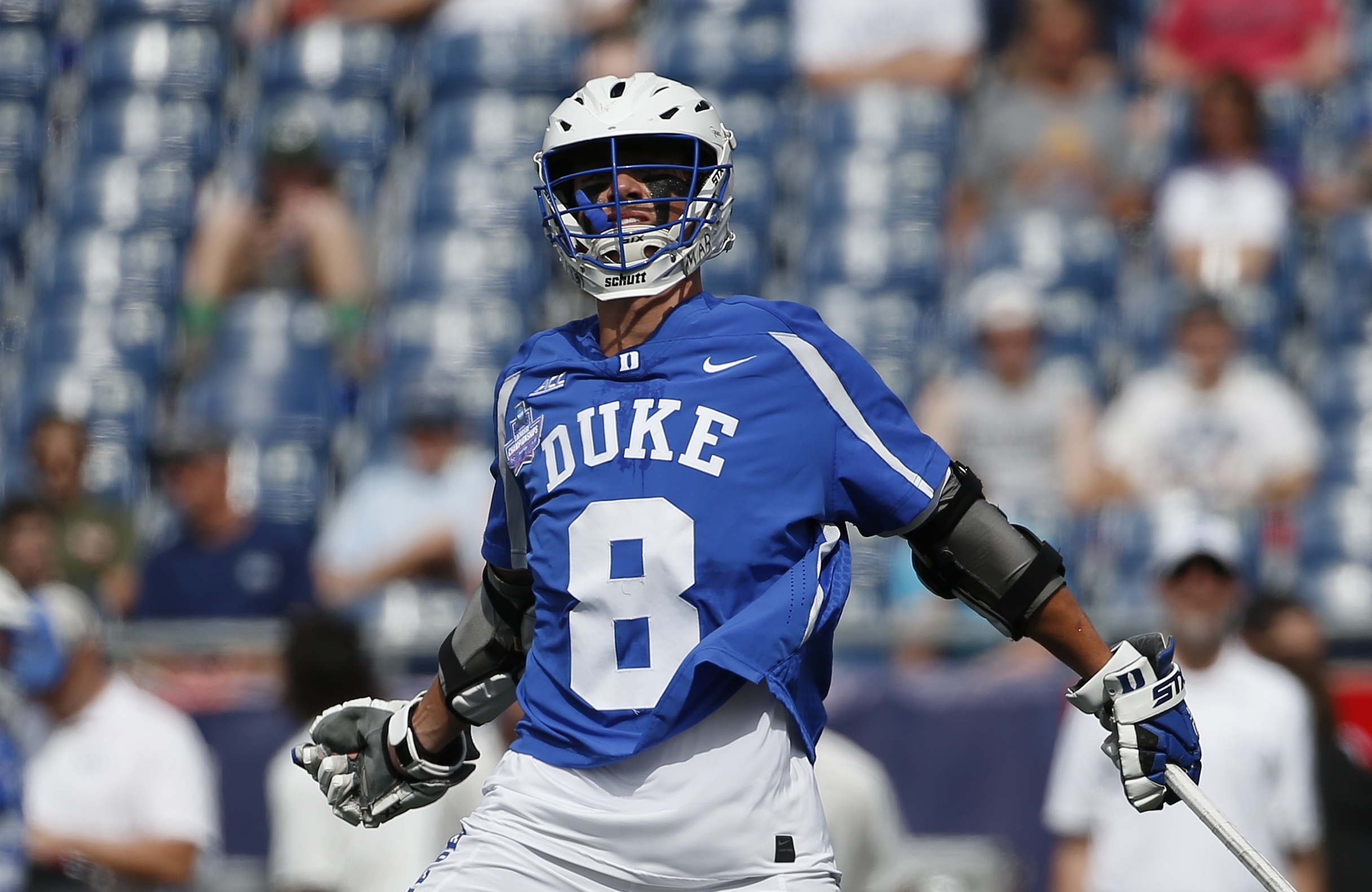 Joe Robertson scored in overtime to
help No. 2 seed Duke overcome an upset bid from Loyola during
Sunday’s quarterfinals in the 2021 NCAA Men’s Lacrosse Championship.

Maryland and Notre Dame also went to overtime before Anthony DeMaio scored the winner for the Terrapins in the day’s second quarterfinal.

North Carolina and Virginia previously
advanced to the semifinals during Saturday’s action. Let’s check out
all of the latest tournament information followed by a recap of
Sunday’s play.

Duke and Loyola traded the lead back
and forth all game, but it appeared the underdog Greyhounds were
primed to earn the program’s fifth Final Four appearance with two
goals 48 seconds apart by Dan Wigley and Kevin Lindley to take a 9-8
lead with just over two minutes left in regulation.

Loyola defenseman Cam Wyers, one of the nation’s best defenders, was called for an unnecessary
roughness penalty with 1:38 remaining, however, which opened the door
for Brennan O’Neill to score the tying goal for the Blue Devils 29 seconds later.

Duke’s
last-second possession in regulation failed to produce the winner, which sent the teams into sudden-death overtime.

The Blue Devils earned the first
possession of overtime, but Wyers forced a turnover to put the upset
in the hands of Loyola’s attackers.

They failed to convert, and Robertson,
who’d already showcased his flair for the dramatic with two overtime
goals earlier in the season, stepped up for Duke again in a crucial
spot.

“I think when the game’s on the
line, that’s my favorite part,” Robertson told reporters. “That’s
what makes it exciting. That’s why athletes compete—because you
have a chance to lose. You’ll be more upset if you didn’t take a shot
than if you miss a shot or it gets saved.”

His goal sent Duke to its 13th Final
Four for a chance to compete for the program’s fourth national title.

Meanwhile, the day’s second game looked
like a potential blowout in the making as Maryland rushed out to a
5-1 lead at the end of the first quarter.

Notre Dame fought back by outscoring
the Terrapins by a 6-2 margin in the second to send the game into
halftime tied at seven.

The seesaw nature of the match
continued in the second half as the Fighting Irish built a three-goal
lead early in the fourth period only for the Terps to score three
times in 46 seconds to level the contest.

After a barrage of goals throughout the game, the final 4:24 of regulation was scoreless to set up another overtime thriller. This time it was DeMaio punching his team’s ticket to the penultimate round.

The NCAA tournament resumes with the
semifinals Saturday followed by the championship match in its annual
slot on Memorial Day afternoon next Monday. The Final Four will take
place at Rentschler Field in East Hartford, Connecticut.

Denial of responsibility! NewsUpdate is an automatic aggregator around the global media. All the content are available free on Internet. We have just arranged it in one platform for educational purpose only. In each content, the hyperlink to the primary source is specified. All trademarks belong to their rightful owners, all materials to their authors. If you are the owner of the content and do not want us to publish your materials on our website, please contact us by email – [email protected]. The content will be deleted within 24 hours.
best sports newsbracketLacrosseNCAAnews update sportsnewsupdatequarterfinalresults