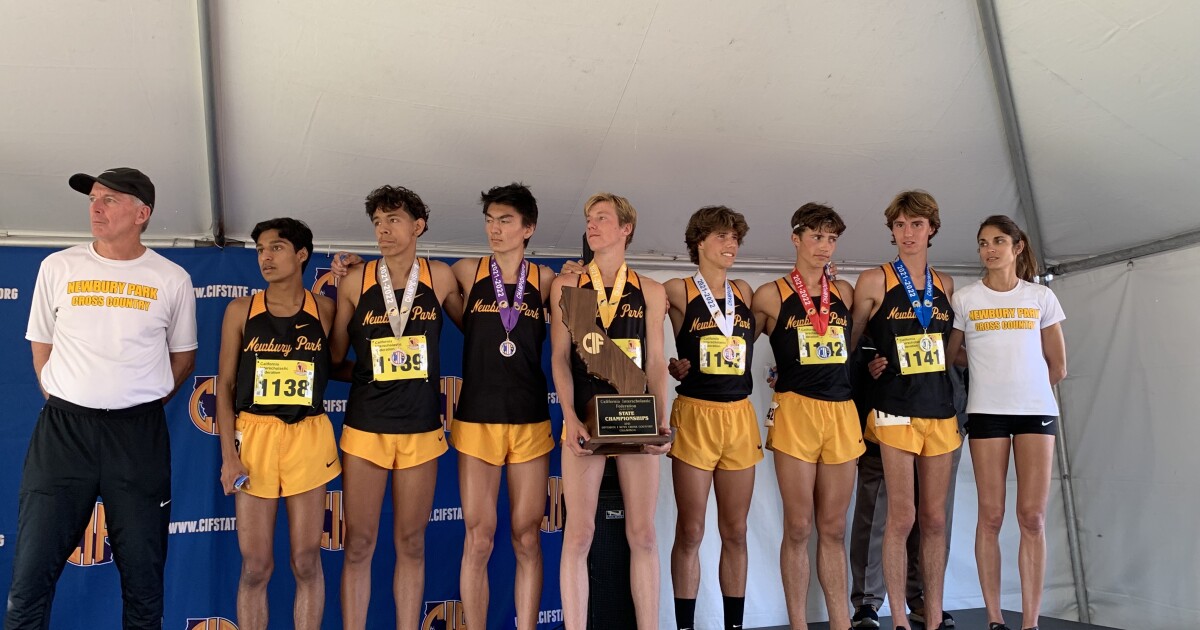 With the temperature in the low 60s at Woodward Park in Fresno, the running conditions could not have been better for Newbury Park High at the CIF state cross-country championships on Saturday. Fans came from across the state to see a historic team run.

Coach Sean Brosnan had kept the wraps on his runners at last week’s Southern Section finals when his top six boys’ runners took the first six places in the three-mile Division 1 race, but this time he let everyone know they were cleared to run as fast as they could.

For the first two miles, four Newbury Park runners were separated by a mere second. The nearest non-Newbury Park runner was eight seconds behind. By the finish, Newbury Park had swept the top four spots to win the team title with a state-record 16 points. The old record was 23 points by Thousand Oaks in 1993. The team time of 73:23 also was a course record.

Colin Sahlman, the reigning Gatorade national runner of the year, won in 14 minutes 26.5 seconds. Next was Leo Young at 14:28, followed by Lex Young at 14:30.3 and Aaron Sahlman at 14:46.4. That’s two sets of brothers dominating the best in California. Newbury Park’s No. 5 runner, Daniel Appleford, finished seventh.

The last time the state meet was run in 2019, Colin Sahlman finished fifth in the Division II race in 15:09.8 when it was won by teammate Nico Young. Sahlman is headed to Northern Arizona in the fall to join Young. His time Saturday set a Division I record and was the second-fastest boys’ time in course.

Temecula Great Oak finished second in the Division I team competition with 119 points.

In Division I girls, the individual race came down to Anna McNatt of Sacramento McClatchy and Sam McDonnell of Newbury Park. McNatt crossed the finish line in 17:07.5. McDonnell was right behind at 17:08.7. Clovis Buchanan took the team title with 51 points. Newbury Park placed second with 72 points.

Here’s the link to complete results.

Denial of responsibility! NewsUpdate is an automatic aggregator around the global media. All the content are available free on Internet. We have just arranged it in one platform for educational purpose only. In each content, the hyperlink to the primary source is specified. All trademarks belong to their rightful owners, all materials to their authors. If you are the owner of the content and do not want us to publish your materials on our website, please contact us by email – [email protected]. The content will be deleted within 24 hours.
best sports newsboysCrosscountryDivisionNewburynews update sportsnewsupdatePark

The ‘Mighty Mo’ begins her second century as a swimming champion

Why iMessage is actually a failure