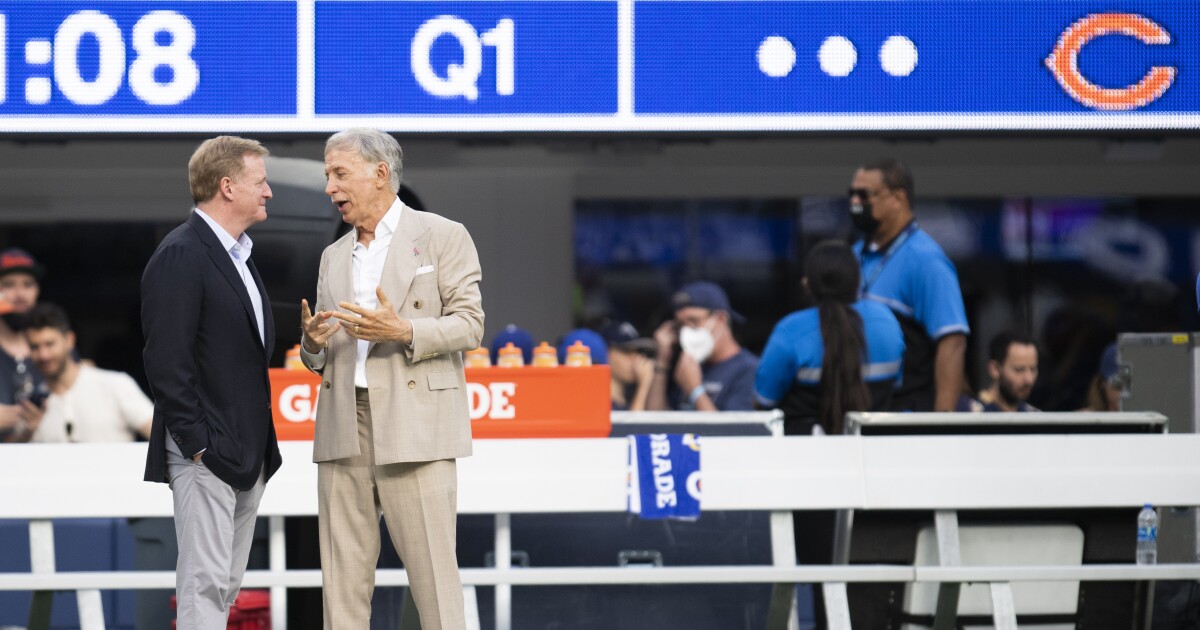 NFL and Rams agree to $800-million settlement with St. Louis over relocation

The Rams and the NFL have agreed to pay about $800 million to settle a lawsuit over the team’s departure from St. Louis.

The settlement enables Rams owner Stan Kroenke to avoid the spectacle of taking the witness stand in a St. Louis trial next month, just before the Super Bowl at Kroenke’s showcase stadium in Inglewood. The settlement also voids Kroenke’s threat to sue the NFL and his fellow owners if they did not agree to share in the settlement cost with him.

It was not immediately clear how much of the settlement would be paid by Kroenke and how much by the league and other owners.

The lawsuit, filed in 2017, alleged the Rams’ move from St. Louis to Los Angeles violated the NFL’s relocation policy, under which the team and the league should have made every reasonable effort to keep the team in St. Louis.

The Rams argued that, when St. Louis declined to make $700 million in improvements to the team’s stadium there, that triggered a lease provision that enabled the team to end the lease and leave town. St. Louis argued that ended the lease but did not absolve the Rams from negotiating with the city thereafter, and the city spent millions on proposals for a new stadium while the Rams had already decided to leave for L.A., even as team and league officials stated otherwise.

The NFL asked the St. Louis Circuit Court to throw out the lawsuit, to order private arbitration and to move any trial out of St. Louis. The court declined all three requests; the rulings were sustained on appeal.

St. Louis asked to be awarded the $550 million that the Rams paid the NFL as a relocation fee, as well as the increase in the franchise value since the move.

With the addition of tax revenue St. Louis lost when the Rams moved, damages could have topped $4 billion, independent of any punitive damages.

The NFL appeared resigned to losing before a hometown jury but confident it could be successful on appeal, at least in having the damages significantly reduced. The NFL’s risk was losing now; the city’s risk was losing later.

Before NFL owners approved the Rams’ move, Kroenke signed an indemnification agreement that obligated him to pay the “costs, including legal fees and other litigation expenses,” to defend any challenge to a move.

Kroenke had informed his fellow owners he does not believe the legal “costs” covered under the indemnity extend to damages, and he had asked them to share in the cost of a settlement.

The indemnification agreement gives Goodell the final say on who owes what. However, Kroenke could have sued the NFL if Goodell tried to compel him to pay damages should a jury find he violated a relocation policy with which the league said he had complied. That could have set up another lawsuit the NFL wished to avoid: Kroenke vs. his fellow owners.

Denial of responsibility! NewsUpdate is an automatic aggregator around the global media. All the content are available free on Internet. We have just arranged it in one platform for educational purpose only. In each content, the hyperlink to the primary source is specified. All trademarks belong to their rightful owners, all materials to their authors. If you are the owner of the content and do not want us to publish your materials on our website, please contact us by email – [email protected]. The content will be deleted within 24 hours.
800millionagreebest sports newsLouisnews update sportsnewsupdateNFLRams

What is COVID toe? Explaining Aaron Rodgers’ painful injury that could linger for Packers