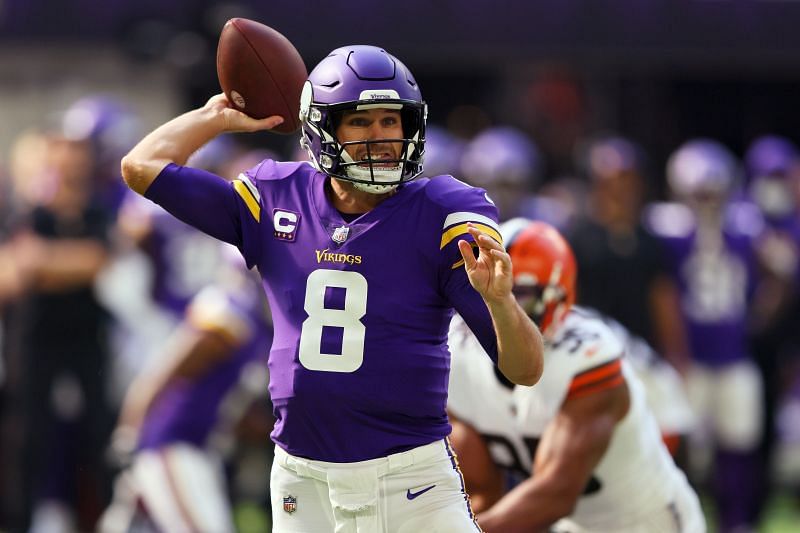 Sunday’s slate of games has some heavily competitive fixtures. That should make for a fantastic day in tournaments with FanDuel and DraftKings.

These platforms run a weekly contest where you can build your fantasy lineup every week, and every day there is an NFL game. It’s very different from regular fantasy football, where your lineup represents you for the entire season.

FanDuel’s budget to build a team is $60,000, and you can’t use more than four players from the same team. DraftKings has a smaller budget of $50,000 to create your team. Check out some tips to build the best lineup of NFL players for Week 5’s Sunday games.

The Detroit Lions’ defense is why Kirk Cousins should be your starter on Sunday. Despite being 16th against the pass, the Lions are going up against an offense with five-to-six star targets on the field.

Kirk Cousins: 94.1 PFF grade from a clean pocket this season1st among all QBs 👀👀

It’ll be difficult to start any of his weapons in this game, but Cousins should reap the benefits and score 20+ fantasy football points against Detroit.

The New England Patriots’ run game was a non-factor when Tom Brady returned to town and Damien Harris was a complete dud.

The Houston Texans are 28th against the run and it would be a good matchup for Damien Harris to get back on track. If he continues to struggle for three straight weeks, there could be a shift in the backfield for Week 6.

Chase Edmonds has been listed as a game-time decision, but he’s worth putting into your lineup unless he’s officially ruled inactive. He hasn’t had under 10 points in fantasy football this season and the San Francisco 49ers are 17th against the run.

Edmonds hasn’t scored a touchdown thanks to James Conner, but he’s still the more productive runner in the backfield. His price is a bargain for a player who could give you 12+ points in a limited role.

Kenny Golladay has been limited in practice this week due to a groin injury. But it’s not severe and the New York Giants cannot afford to lose him for Week 5. Golladay had his first decent game with both Darius Slayton and Sterling Shepard out last week, finishing with over 110 receiving yards.

Kenny Golladay and Kadarius Toney combined for 194 yards and 12 catches!!We need to see this WEEKLY!!

Trevon Diggs could prove to be an issue, but he could end up covering Kadarius Toney or John Ross instead, freeing up Golladay to see most of the targets.

Hunter Renfrow leads the way in targets and catches for the Las Vegas Raiders as they top the AFC West. Renfrow has had at least six targets in every game this season and has quickly become Derek Carr’s number one option. He will usually be thrown to on crucial plays.

Hunter Renfrow just did THIS. 💥💥

The Chicago Bears still have some fight in them, but Derek Carr’s offense is on a different level. Renfrow should remain the main target on big plays for the Raiders on Sunday.

The Buffalo Bills have played much better since Week 1 and get a true test of their quality against the Kansas City Chiefs on Sunday. Emmanuel Sanders has been a superstar addition for the Bills this year and will be relied on frequently.

Emmanuel Sanders is worth every single penny the Bills end up paying him and more https://t.co/09vZzy2whI

He has had six targets in three straight games and scored twice in Week 3 against Washington. He’s a value option who can produce great numbers in fantasy football.

At this point, Dalton Schultz is the unofficial TE1 for the Dallas Cowboys, even though Blake Jarwin is a better blocker. He continued his stellar start to the season with 58 yards and a touchdown last week for nearly 15 fantasy football points.

Schultz led the team in targets and catches the previous week and could be a top target on Sunday as well.

Running backs are usually a safe bet at FLEX every week. Leonard Fournette had a great game against the Patriots last week with 92 rushing yards and 47 receiving yards.

Leonard Fournette played on 81% of the #Buccaneers snaps — the highest percentage for a Tampa Bay RB since Bruce Arians took over as head coach in 2019. per @NextGenStats

Fournette has had a quiet season in fantasy football but has got his owners excited for the future. He is the lead runner for the Tampa Bay Buccaneers going into a match with the Miami Dolphins, who are 27th against the run.

The Baltimore Ravens got the better of the Denver Broncos’ defense last week, but their matchup in Week 5 favors them. The Pittsburgh Steelers’ new offensive scheme severely limits the offense and has been stagnant since Week 2.

Ben Roethlisberger has been sacked ten times and could see a couple more in Week 5. The Broncos’ offense is another story, but the defense is worth starting in fantasy football this week in FanDuel and DFS.

Denial of responsibility! NewsUpdate is an automatic aggregator around the global media. All the content are available free on Internet. We have just arranged it in one platform for educational purpose only. In each content, the hyperlink to the primary source is specified. All trademarks belong to their rightful owners, all materials to their authors. If you are the owner of the content and do not want us to publish your materials on our website, please contact us by email – [email protected]. The content will be deleted within 24 hours.
adviceArizona Cardinalsbest sports newsBuffalo BillsDenver BroncosDFSDraftKingsEmmanuel Sanders