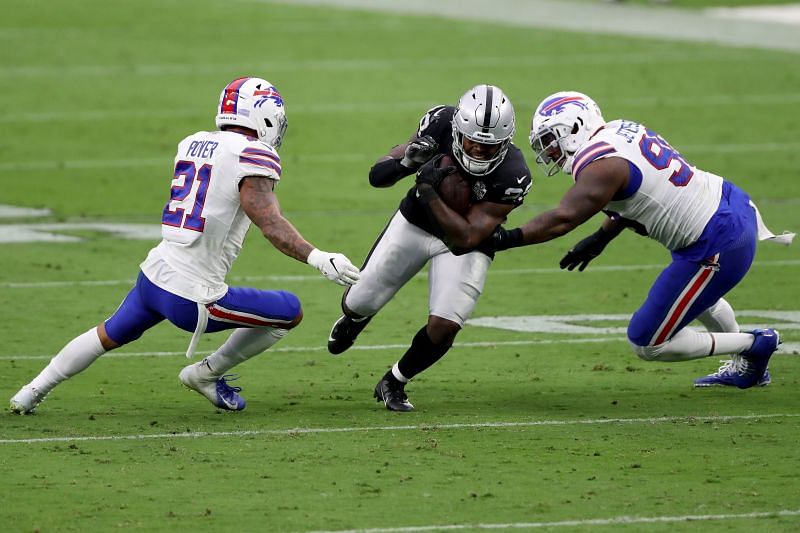 NFL Fantasy Football: Is Josh Jacobs a bust this season?

Josh Jacobs has had about as rocky of a start to the season as any player, not on injured reserve. Between nagging injuries, mysterious absences, and disappointing stat lines, fantasy players are evaluating the running back’s future with their team. Will Josh Jacobs bounce back, or should owners get out now? Here’s a look at Jacobs’ future in 2021.

Josh Jacobs: In or out?

Josh Jacobs’ injury concerns appear to be behind him as he’s no longer listed on the Raiders’ injury report. Up until today, Jacobs had been listed as questionable with an ankle injury that has kept him out of two games this season. Jacobs may be healthy at the moment, but the running back won’t know how he truly feels until he plays on Sunday.

If the running back survives the game without setbacks, Jacobs could be fully healthy. However, if he suffers any damages, it could bring some clarity to fantasy owners.

Essentially, Jacobs won’t be free from injury until next season if he doesn’t clear Sunday with flying colors. If he can’t stay healthy after finally exiting the injury report, the injuries will nag him for the entire season. Only with an offseason of rest will Jacobs’ ankle truly heal.

If Jacobs is completely healed, then he has to clear the next hurdle for fantasy owners. He will need to play well consistently enough to be a starter in Fantasy Football. His best game came against the Baltimore Ravens when he rushed ten times for 34 yards and two touchdowns.

If Jacobs can score in a game and get at least 70 yards, fantasy owners will keep him around. However, if this is the exception rather than the rule, fantasy owners will start selling him. Right now, starting Jacobs is a risky decision. It is not a risky decision just because of the injury history but also because of the types of games the Raiders are playing this year.

The Raiders have trailed in every one of their games this year. Meaning they’ve needed to come back. Comebacks don’t happen on the ground. They happen through the air. Thus, Jacobs’ opportunities will be limited in addition to his injuries and rare fortune in 2021.

Among all of these factors, it makes sense for owners to trade him if they get a good offer. Jacobs has too many factors working against him this season to have a great year. Between the injuries, compromised play, and game situations the Raiders find themselves in, the Jacobs train seems to have already left the station.

At best, Jacobs should be used as a flex until he can stack up some performances. Otherwise, the running back could be some great trade bait and could be leveraged into a winning deal if used correctly.

Denial of responsibility! NewsUpdate is an automatic aggregator around the global media. All the content are available free on Internet. We have just arranged it in one platform for educational purpose only. In each content, the hyperlink to the primary source is specified. All trademarks belong to their rightful owners, all materials to their authors. If you are the owner of the content and do not want us to publish your materials on our website, please contact us by email – [email protected]. The content will be deleted within 24 hours.
best sports newsBustDerek CarrfantasyfeatureFootballJacobsJosh