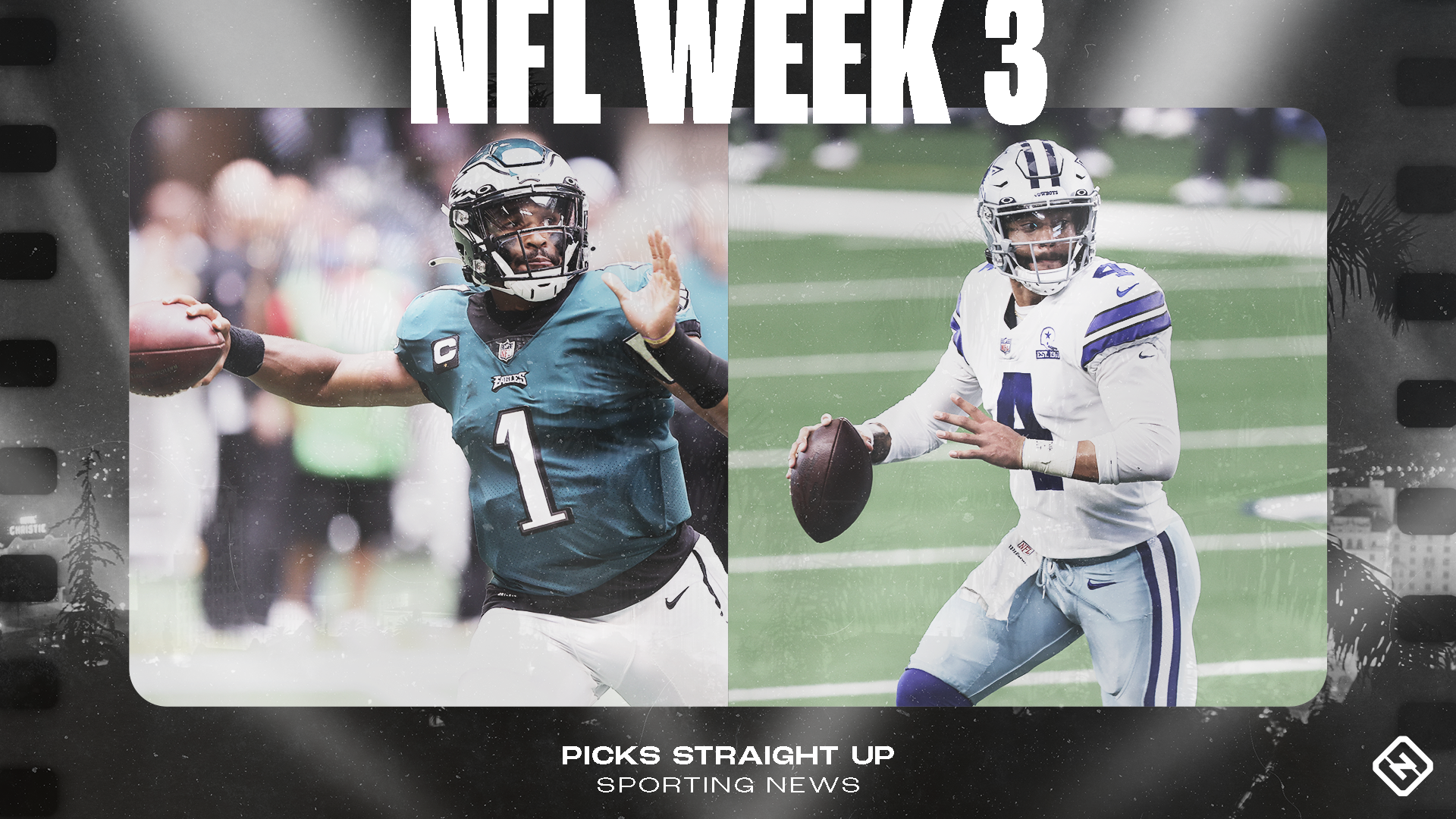 After a week of upsets, the Week 3 schedule features just one game between teams with 2-0 records.

It’s early, but a possible NFC championship preview between the Buccaneers and Rams is the highlight of the schedule; a chance for Los Angeles to show it’s for real with new quarterback Matthew Stafford. Should Tom Brady and Tampa Bay be underdogs in that one?

There are three intriguing divisional matchups between 1-1 teams, too. The Bengals travel to Pittsburgh, the Chargers are on the road at Kansas City, and Monday Night Football features the next installment of the Eagles-Cowboys rivalry. Dallas games have been must-see TV so far.

Each week, Sporting News will pick games straight up. The upset factor hit hard in Week 2:

With that in mind, below are our picks and predictions for Week 3:

Houston’s Tyrod Taylor (hamstring) is day to day, and Deshaun Watson will not play this week. That is disconcerting heading into a matchup against the Panthers, which have allowed a league-low 190 yards per game so far. Christian McCaffrey gets another 20-plus touches, and Carolina is the surprise 3-0 team.

The Bills are coming off a shutout victory. Washington’s Taylor Heinicke threw for 336 yards in Week 2, but Buffalo will clamp down on the running game in a big home victory.

This could be Justin Fields’ first start, and he presents a different challenge for the Browns. Cleveland has generated just three sacks in two games, but that pressure will turn. Chicago is good at stopping the run, but they will have a hard time playing catch-up if Baker Mayfield continues to play mistake-free football.

The Lions are still figuring out their defense under first-year coach Dan Campbell, and that’s problematic coming off a short week against Baltimore. The combination of Lamar Jackson and Ty’Son Williams carries the Ravens to another road victory.

The Colts nearly upset the Rams, and now they face a Titans’ team that found its offense in an overtime thriller against the Seahawks. These teams have split the last eight meetings with unexpected results along the way. We’ll try the Colts one more time.

The Chiefs are 1-1, and there is a case to be made they could be 0-2. Justin Herbert and Patrick Mahomes are among the top-five passers through two weeks, but Herbert has two TDs and three interceptions. The Chiefs’ defense tightens up late in a shootout.

MORE: Who are NFL’s contenders, pretenders after Week 2?

The Saints have been the early-season box of chocolates with Jameis Winston, and the Patriots have allowed just 11.5 points per game with five interceptions. This used to be a blockbuster matchup with Drew Brees and Tom Brady. Now, it comes down to which team commits fewer turnovers.

A pair of 0-2 teams have struggled to score, so it’s a true tossup game. Atlanta’s Matt Ryan will have a successful day with favorite targets Calvin Ridley and Kyle Pitts, and the Giants will suffer yet another close loss, this time at home.

There is no love lost between these AFC North rivals. Joe Burrow has taken nine sacks through two games, but Pittsburgh averages just 57 rushing yards per game. The Bengals haven’t won at Heinz Field since 2015. That won’t change in Week 3.

Kyler Murray is averaging 370 passing yards of total offense per game, and the Cardinals present too many challenges on offense for Jacksonville. The Jaguars have a -5 turnover ratio through two games. That won’t cut it against this offense.

The Broncos have a chance to be a surprise 3-0 team in the AFC. The defense has allowed just 13 points per game, and Von Miller has three sacks. That will prompt more rookie mistakes from Zach Wilson, and Teddy Bridgewater will take advantage.

The Raiders are an early-season darling after a 2-0 start, and Derek Carr is dealing a hot hand. That would make them seem primed for an upset, but that’s too difficult to call with Tua Tagovailoa’s status to be determined because of a rib injury. We’ll at least call for a close game.

The Rams are the last NFC team to beat the Buccaneers, and that was in a 27-24 matchup last season. Stafford will get his shot at the defending champions, who have shown no signs of slowing down with Tom Brady. Both teams are averaging more than 30 points per game, so we’re hoping this game will live up to the hype.

The Vikings have lost back-to-back heart-breakers because of field goals, and Kirk Cousins is 0-3 against the Seahawks since signing with Minnesota. Those last two games have been tight however, and Seattle could slip up in another close one on the road. The Vikings avoid a 0-3 start.

Cue another round of Aaron Rodgers-49ers talk, and the career arc that has followed the quarterback all season. Green Bay won at San Francisco last year, but that was against an injury-riddled roster that doesn’t have a chance. It’s a big Sunday Night Football spot, and the Packers’ defense will be exposed.

The Cowboys have played two thrillers in two weeks, so Week 3 should be no different. The Eagles have lost their last three road games at Jerry World, but Jalen Hurts will flip the script in a back-and-forth battle with Dak Prescott. Always expect the unexpected with these two.

Denial of responsibility! NewsUpdate is an automatic aggregator around the global media. All the content are available free on Internet. We have just arranged it in one platform for educational purpose only. In each content, the hyperlink to the primary source is specified. All trademarks belong to their rightful owners, all materials to their authors. If you are the owner of the content and do not want us to publish your materials on our website, please contact us by email – [email protected]. The content will be deleted within 24 hours.
best sports newschargersChiefsCowboysEaglesnews update sportsnewsupdateNFL