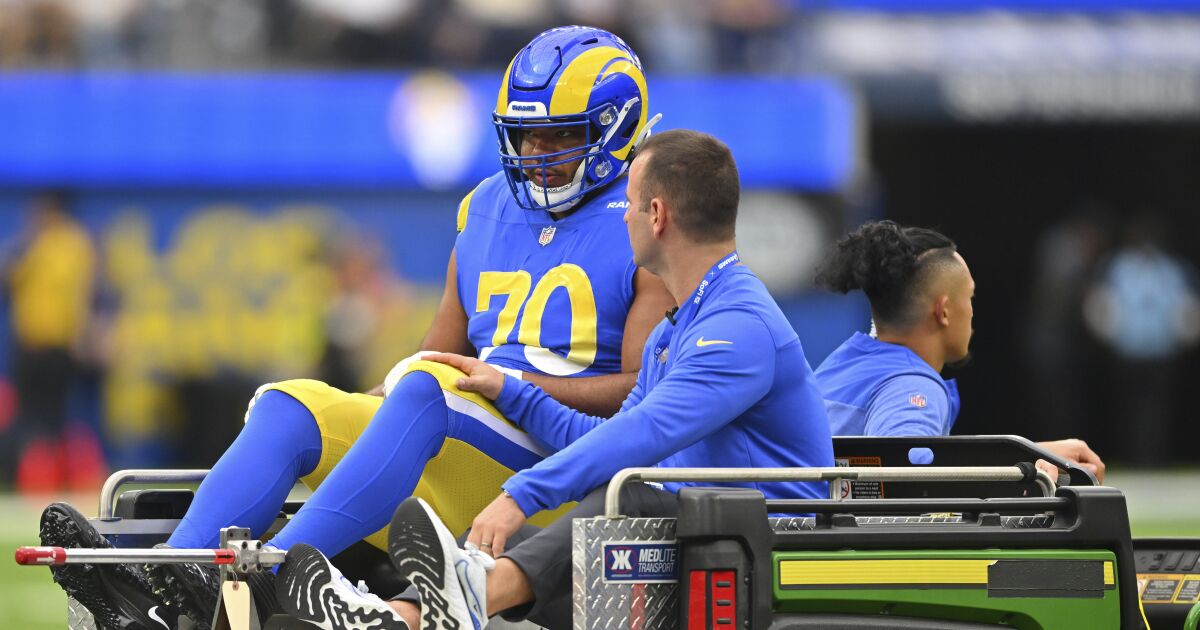 NFL readers Q&A: How did Rams blow it on line? Is Chargers’ Brandon Staley on thin ice?

The Rams don’t appear as though they can “run it back” to another Super Bowl title as they had proclaimed. Meanwhile, the short-handed Chargers played well in consecutive games only to lose. Their next string of games could determine whether they are going to be in a battle for a playoff spot. Rams beat writer Gary Klein and Chargers beat writer Jeff Miller address fans’ concerns and questions with seven weeks to go in the regular season.

When will you acknowledge Joe Noteboom ($25M) and the NOBODY line (none top 10 at their position) were no example of succession planning? Day 1, only one offensive lineman, Allen, was rated top 20 at their position. Now that two tackles are gone what WAS and will be the succession plan for the offensive line? You know the thing that keeps the quarterback from getting concussions?

Klein: When left tackle Andrew Whitworth retired and right guard Austin Corbett left as a free agent, the Rams did have a succession plan in place. In 2018, they selected Joe Noteboom with their highest pick in the draft and then had him apprentice behind Whitworth for four seasons before signing him to an extension. They also re-signed center Brian Allen. Then they drafted offensive lineman Logan Bruss with their highest pick in the 2021 draft, projecting him as the starting right guard if not at the beginning of the season, then by midseason. They also extended right tackle Rob Havenstein on the eve of the season opener.

That seems like a plan. But like a lot of plans, this one did not work out. Bruss suffered a season-ending knee injury, Allen has had several injuries and Noteboom eventually suffered a season-ending Achilles injury as well. And backups trained at multiple positions either suffered injuries or did not play well. The Rams no doubt will be looking to sign free-agent offensive linemen and draft others. But most of their money is locked up in quarterback Matthew Stafford, receiver Cooper Kupp, defensive lineman Aaron Donald and cornerback Jalen Ramsey.

The Chargers under Spanos have always been notoriously cheap when it comes to hiring coaches. Is that all that’s saving Brandon Staley now because he sure seems out of his depth?

Miller: Not sure what “out of his depth” means, but, no, that’s not what’s saving Staley right now. This franchise historically doesn’t make in-season head-coaching changes. So, if ownership decides to move on from Staley, I wouldn’t see that happening until after the season. Just as a reminder, Staley is 14-13 to start his head-coaching career. Through their first 27 games, Bill Belichick was 11-16 and Bill Walsh and Jimmy Johnson were both 5-22.

Did Rams management in committing so much money to a relatively few players not leave enough salary-cap cash to put high-quality players in the many other offensive and defensive positions needed to field a consistent winner? My question extends well beyond the obvious holes in the offensive line. Second, this season’s top contenders seem to feature highly mobile quarterbacks who add a vital dimension to their offenses. No knock on Stafford as his resumé speaks for itself, but scrambling has clearly never been his strong suit, thoughts?

Klein: The Rams are long past the days of 2018 when they had a quarterback playing on a rookie contract — and could surround him with high-priced stars all over the field. The NFL is a season-to-season proposition. Fielding a consistent winner doesn’t mean anything if you don’t win Super Bowls. And the Rams won the Super Bowl by acquiring and paying their star players. After the Super Bowl, they signed Stafford, Kupp and Donald to large extensions. They signed receiver Allen Robinson to a market-level deal and signed future Hall of Fame linebacker Bobby Wagner to a team-friendly deal. And Ramsey also is playing on a big contract.

Stafford has never been much of a scrambler. With one of the best passing arms in the NFL, he does not need to be. And he is not going to change now. The running dimension that other quarterbacks bring to their offenses makes it very difficult for defensive coordinators. But teams can win Super Bowls with both. Patrick Mahomes led the Kansas City Chiefs to the title in the 2019 season. Tom Brady led the Tampa Bay Buccaneers in 2020, Stafford the Rams last season.

The Chargers have learned the hard way, finding a good kicker is not easy. Why not sign “Dicker the Kicker?” The kid has a strong very accurate leg. So far hasn’t been fragile; our others are like glass.

Miller: The Chargers did sign Cameron Dicker to their active roster on Tuesday and placed Dustin Hopkins on injured reserve. So, unless he gets hurt or his performance suddenly goes sideways, Dicker will be the kicker for at least the next four games.

Miller: To take these in order, 1) I think you’re asking why Justin Herbert didn’t run a QB sneak at the end of the half. Generally speaking, that’s a call that he can make at the line of scrimmage based on the look of the defense. Herbert apparently didn’t see sneaking there as an advantage. 2) Travis Kelce is on his way to making his eighth consecutive Pro Bowl. No one can stop him. He’s a nightmare matchup for cornerbacks like Asante Samuel Jr., and you could question why that pairing happened at times Sunday. There’s value in mixing coverages, but asking Kenneth Murray Jr. to cover Kelce — which happened on a play that resulted in a 34-yard gain for the Chiefs — is not ideal. The Chargers perhaps could have used Derwin James Jr. on Kelce more Sunday, but James is most effective when he’s lining up all over the field. 3) Justin Herbert can do a lot of things. But running like Patrick Mahomes isn’t one of them.

Doesn’t appear that any of the defensive backs the Chargers either drafted or signed through free agency have done or are capable of doing anything worthwhile, so who is accountable? Is it all on [general manager Tom] Telesco or does Staley also bear responsibility for the choices?

Miller: I’d argue Derwin James Jr. is pretty good. Asante Samuel Jr. has a chance to be very good. Still too early to conclude that he’s incapable of doing anything worthwhile. J.C. Jackson was a Pro Bowl pick last year and didn’t have much of a chance to show himself this season before he got hurt. Ultimately, Tom Telesco and Brandon Staley are most responsible for the construction of this roster. The most disappointing thing about the 2022 Chargers for me has been the struggles of the defense overall. We heard all offseason about how they had added players with the experience and body types necessary to succeed in this scheme. The results through 10 games have been wildly mixed.

Do you feel that the Chargers will waste another future Hall-of-Fame QB like they did with Dan Fouts, Drew Brees, Philip Rivers and now Justin Herbert? Telesco continually fails to build a complete team. The O-line has been a problem for almost 10 years.

Miller: By “waste” I assume you mean not win a Super Bowl. I’m going to take a positive approach and say the Chargers will win an NFL title during Justin Herbert’s tenure. Only because I think he is that good and none of the fans of this team believe it will ever happen. Happy Holidays!!!

Denial of responsibility! NewsUpdate is an automatic aggregator around the global media. All the content are available free on Internet. We have just arranged it in one platform for educational purpose only. In each content, the hyperlink to the primary source is specified. All trademarks belong to their rightful owners, all materials to their authors. If you are the owner of the content and do not want us to publish your materials on our website, please contact us by email – [email protected]. The content will be deleted within 24 hours.
best sports newsblowBrandonchargersiceLinenews update sportsnewsupdate