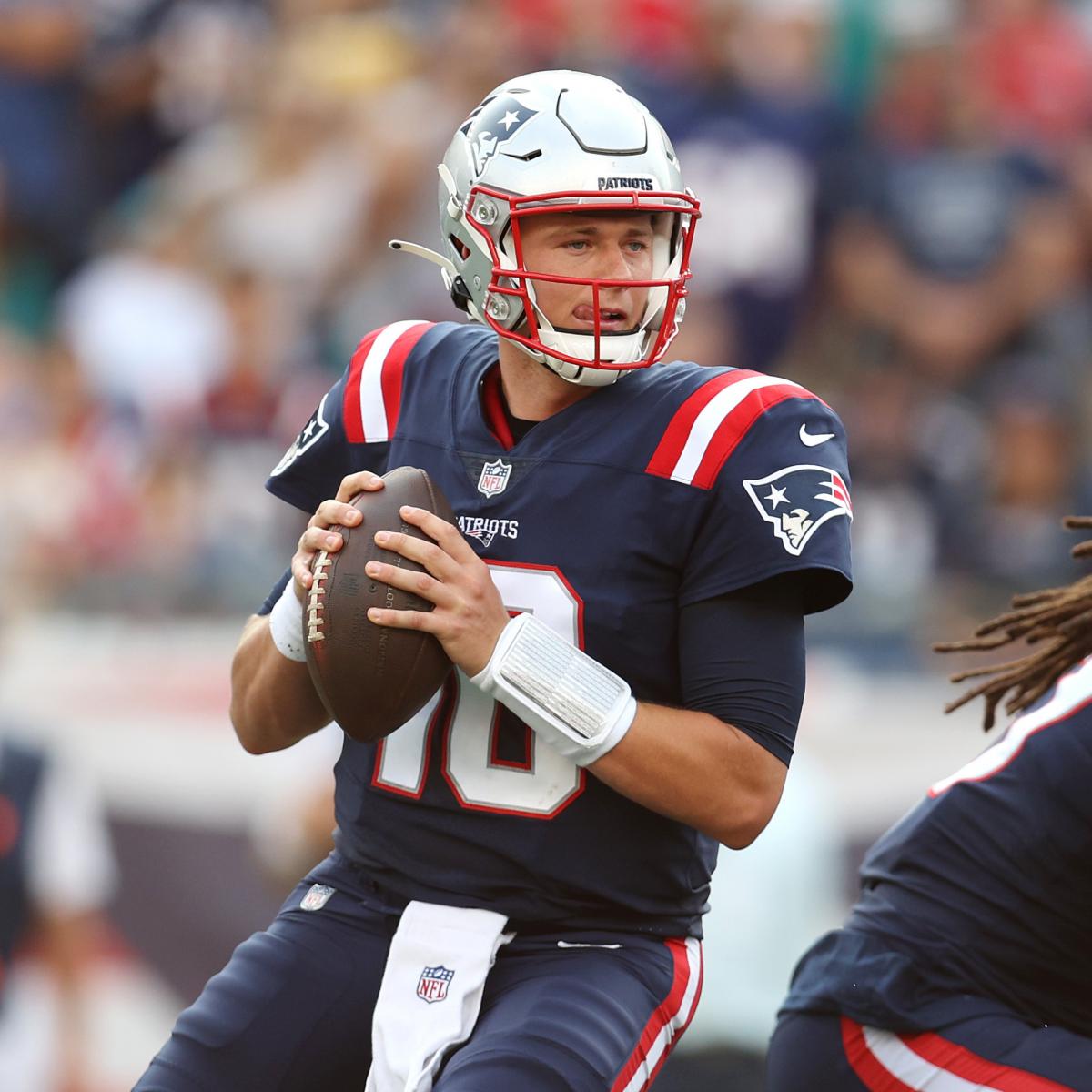 The 2021 NFL season has barely begun, but it’s not too early to start grading the performances of the five rookie quarterbacks who saw the field in Week 1.

The 2021 draft class was heralded as a defining one for the league, as five of the most talented prospects the position has seen in quite some time all entered together. All five played in Week 1, with three of them starting.

Let’s take a look at how each rookie quarterback fared in his professional debut.

The Bears had one of the most intriguing offseasons of any team. After letting incumbent quarterback Mitchell Trubisky walk in free agency, the team signed veteran Andy Dalton and drafted Justin Fields.

Despite Fields putting together an impressive training camp, head coach Matt Nagy elected to name the 33-year-old Dalton the organization’s Week 1 starter before preseason wrapped up. The veteran drew boos from fans at Soldier Field, who made it readily apparent they would prefer the rookie to win the No. 1 QB job.

It might not be long before they get their wish.

Dalton had a tough time in his first start for Chicago, although it’s hard to fault him too much considering it came on Sunday Night Football against a Rams defense that ranked No. 1 in the league last year. He completed 27 of 38 passes for 206 yards and an interception, failing to find the end zone in a 34-14 defeat.

Fields only saw limited action but was much more effective.

Nagy put the Ohio State product in at times to provide a spark to a sluggish offense. Fields played the part perfectly, especially when the Bears were down 20-7 late in the third quarter, scoring on a designed run in the red zone.

The Bears would let the contest get away from them in the fourth quarter, but they have to be happy with Fields’ work. The 22-year-old, who also completed a pair of passes for 10 yards, did his job well and should earn more playing time as early as next week.

While Nagy may have been reticent to name Fields the starter going into the 2021 campaign, a soft Week 2 matchup against the Bengals would be an ideal time to make the change.

Trey Lance only saw the field in San Francisco’s Week 1 matchup for four snaps, but the No. 3 overall pick still made an impact.

While he was bottled up on his rushing attempts—gaining just two yards on three totes—his lone pass was a significant one.

Lance made the most of his short time on the field when he came on midway through the first quarter. The 21-year-old lined up in the shotgun near Detroit’s end zone and faked a handoff before looking left and firing a perfect touchdown pass to wideout Trent Sherfield.

Lance believes the threat of a QB keeper helped free up Sherfield for the easy score, per Jerry McDonald of the Mercury News.

“That’s what gave me the time,” Lance said. “That’s kind of the goal. Make the defense think I’m going to run the ball. Trent ran a great route, then made a great catch.”

Despite Lance’s hot start, Kyle Shanahan didn’t dial up any more passes for him.

The San Francisco offense appears to be in good hands with Jimmy Garoppolo, as he connected on 17 of 25 passes for 314 yards and a score while being in clear control of an offense that put up big numbers against Detroit.

However, Lance should still see the field more frequently in the coming weeks. The 49ers rotated quarterbacks during the preseason, including one 10-play scoring drive in which each player took five snaps apiece.

Sunday’s performance proved that Lance can make a difference as a change-of-pace substitute. Expect Shanahan to build on that successful debut and get Lance more involved, especially as a passer, in Week 2 against the Eagles.

The Jaguars drafted Trevor Lawrence to be the savior of their flailing franchise, but the No. 1 overall pick’s debut made it clear it will take some time and a stronger supporting cast to turn this rebuilding team into a Super Bowl contender.

Week 1 showed just how far Lawrence and the Jaguars have to go after they were blown out by the Texans.

In the 37-21 victory, Houston accomplished something no other team in organized football had: hand Lawrence a loss during the regular season. Week 1 marked the first non-playoff defeat of the 21-year-old’s football career. Prior to joining the NFL, Lawrence was 68-0 across his high school and collegiate starts.

He did his best to keep the Jags afloat, throwing 51 times, but he only completed 28 of those passes for 332 yards with three TDs and three picks.

Jacksonville’s defense didn’t help Lawrence out much, conceding four touchdowns to a Texans opponent that had the lowest projected win total of any team this year.

Although the trio of interceptions were ugly, Eugene Frenette of the Florida Times-Union tweeted that Peyton Manning and Andrew Luck also lost and threw three picks apiece in their professional debuts.

Even though he lost and didn’t have a great outing against a lowly foe, it’s just one game. Look for him to build on this performance and limit the mistakes as he gets accustomed to the pro game, starting in Week 2 versus the Broncos.

Jets fans were excited for Zach Wilson to make his debut, but some may have already been worried the team made a mistake drafting the BYU star before the first half was over.

Wilson looked downright terrible early against the Panthers, committing a litany of mistakes, poor reads and bad throws. The No. 2 overall pick was sacked six times in the first 30 minutes while the Jets mustered just 82 yards of offense.

The much-needed break helped Wilson calm down. The Jets were down 16-0, but the team battled back to make things competitive.

Gang Green finally got on the scoreboard late in the third quarter after its 22-year-old signal-caller orchestrated an eight-play, 70-yard drive that culminated in a 22-yard touchdown grab from wideout Corey Davis.

Davis would find paydirt again near the end of the contest after Wilson marched New York down the field on a 10-play, 93-yard scoring drive. Although the Jets couldn’t recover the onside kick to make it a truly interesting finish, team brass still had to feel relieved by Wilson’s improvements in the second half.

Wilson’s stat line—20-of-37 for 258 yards, two touchdowns, one interception—wasn’t terrible, especially considering how out of sync he looked early.

The Jets have something here in Wilson. Now they just need to let him settle in while tinkering with the offense to best suit his strengths.

The Patriots felt comfortable enough with Mac Jones that they not only named him the starter but also outright cut incumbent Cam Newton just before the season began.

The decision appears to be the right one, even if the Pats started the year with a 17-16 loss to the rival Dolphins.

Jones, whom many regarded as the most “pro-ready” of the five quarterbacks selected in the first round, lived up to that description by completing 74.4 percent of his passes for 281 yards and a score in a gritty divisional clash.

There have been a number of anecdotes about how the hard-working, humble Jones is the right fit for this Bill Belichick-led program, and the Alabama product showed he can effectively lead this offense when it matters.

Against the Dolphins, he stood strong against the rush, stepping up in the pocket and keeping his eyes downfield. He also wasn’t looking to make hero throws but rather dissect the defense with quick passes to the open man. It’s something that Tom Brady did well for a long time in Josh McDaniels’ offense, picking apart the opponent and only going for the big play when an opportunity presented itself.

Jones completed a pass to eight different players, establishing the most rapport with wideout Nelson Agholor. Agholor, in his first year with the Patriots after signing in free agency, caught five balls for 72 yards and Jones’ lone touchdown.

While the Jones didn’t get a chance to put New England ahead late in the fourth quarter after running back Damien Harris coughed up a fumble, the 23-year-old was confident and collected leading New England into the red area with the pressure ramping up late in a close game.

New England will face another AFC East rival in Week 2 when it visits the Jets. Jones will be tasked with outdueling fellow rookie Zach Wilson, a challenge he seems ready for after his impressive debut.

Denial of responsibility! NewsUpdate is an automatic aggregator around the global media. All the content are available free on Internet. We have just arranged it in one platform for educational purpose only. In each content, the hyperlink to the primary source is specified. All trademarks belong to their rightful owners, all materials to their authors. If you are the owner of the content and do not want us to publish your materials on our website, please contact us by email – [email protected]. The content will be deleted within 24 hours.
Loading...
best sports newsdebutsGradesnews update sportsnewsupdateNFLRookiesports news

Where is the Golden Cube in Fortnite Chapter 2 Season 8?