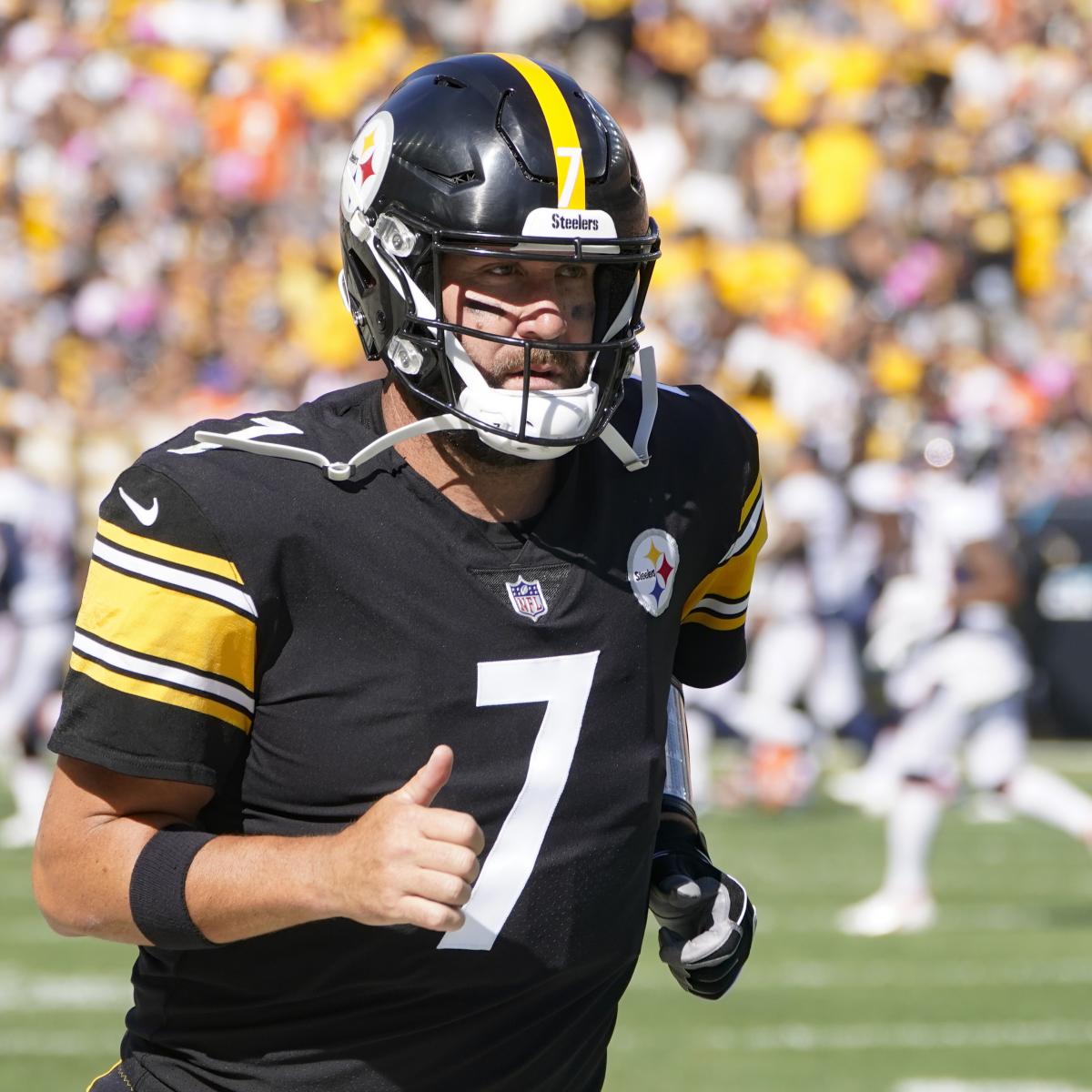 NFL Teams That Desperately Need to Strike a Trade

It feels like some massive NFL trade dominoes are about to fall.

Now that the season has hit the quarter mark and teams see where they are, a flurry of moves could happen quickly.

This started with the New England Patriots shipping cornerback Stephon Gilmore to the Carolina Panthers and, to a lesser extent, with the Dallas Cowboys releasing linebacker Jaylon Smith.

So, what comes next? There are some teams out there that desperately need to make a move. With rebuilders likely selling, there’s always a hypothetical deal to suggest.

These are the teams that need help now.

The running back position might be devalued around the league, but the 2-3 San Francisco 49ers could use some additional firepower now that Jimmy Garoppolo is injured again, forcing rookie Trey Lance into the lineup for at least Week 5.

Running back has been a weak point after starter Raheem Mostert suffered a season-ending injury in Week 1.

Rookie Elijah Mitchell did explode for 104 yards and a touchdown in Week 1, but he also suffered a shoulder injury in Week 2 that knocked him out for the next two games. When healthy, he’ll share duties with fellow rookie Trey Sermon. In a Week 5 loss to Arizona, though, it was Lance, not Mitchell, who led the team in carries and rushing yards.

Given the shaky injury trends at quarterback and running back already, adding another effective piece for a cheap value could be a season-altering move for the 49ers, especially since the devalued nature of the spot means affordable late-round pick prices.

Think Marlon Mack of the Indianapolis Colts, a guy Adam Schefter of ESPN reported the Colts are open to trading. He’s been a recent healthy scratch behind Jonathan Taylor and Nyheim Hines, yet he averages 4.4 yards per carry for his career and is a good receiver, making him a strong fit in the San Francisco backfield.

As improbable as it probably is, the Pittsburgh Steelers should consider trading for a starting quarterback if they have any intention of saving this season.

Over his team’s 1-3 start, Ben Roethlisberger had looked like a guy who overstayed his welcome by one season, completing 64.1 percent of his passes with four touchdowns and four interceptions while averaging just 6.1 yards per attempt (he averages 7.7 for his career).

Big Ben did bounce back as the Steelers moved to 2-3 with a Week 5 win over Denver, throwing two touchdowns and no picks, though it was a roller coaster that included a fumble and then a 50-yard touchdown bomb.

Pittsburgh’s backup situation leaves a lot to be desired too, as Mason Rudolph has averaged 6.4 yards per attempt with 15 touchdowns and 10 interceptions over 15 career appearances. Dwayne Haskins, meanwhile, has averaged 6.3 with 12 and 14 over 16 pro games.

Granted, a new quarterback might not be able to join a new offense and make much of a difference this season. But a Week 7 bye at least provides the chance for a crash course of a change. A new addition via trade could also be about potentially finding a long-term solution so the team isn’t forced into only looking at quarterbacks in the first round next year.

With that theme in mind, asking about Gardner Minshew in Philadelphia or even Tua Tagovailoa in Miami could make sense. Big Ben, after all, is 39 years old, had injury questions chasing him all of last season, and this year so far has had hip and pec issues, so the team might need a better backup outlook over the rest of the season.

The New Orleans Saints didn’t do much before the season to hide the fact that wideout would be a problem for the offense.

Through four games, it was Deonte Harris, an undrafted free agent from 2019 out of Assumption, who led the team in receiving with 164 yards and one touchdown. Marquez Callaway, undrafted in 2020 out of Tennessee, was second with 137 yards and one score. Both had numbers inflated by long plays of 55 or more yards.

Behind them, it was tight end Juwan Johnson who had caught three touchdowns from Jameis Winston and running back Alvin Kamara with two more. The lack of an actual receiving threat at wideout is a big part of why the team could only muster seven points in a Week 2 loss to Carolina and lost to the otherwise-winless New York Giants.

Continuing the trend of hit-or-miss production, both Callaway and Harris combined for three touchdowns in a Week 5 win over Washington as Winston bounced back against an exploitable secondary.

Still, with Michael Thomas out and likely rusty when he returns, the Saints should look to make a move. Pittsburgh’s James Washington, a second-rounder in 2018, is a high-upside target worth sending a mid-round pick for right now. He’s not getting looks in three-wideout sets unless another player misses time and had trade buzz around him in August.

The Tampa Bay Buccaneers have looked great, with perhaps one notable exception: the secondary.

It might not seem all that bad, especially when a legend like Tom Brady can cover up some of the issues. But there’s a reason the team already went out and added Richard Sherman.

With Carlton Davis and Sean Murphy-Bunting on reserve lists—over 59 percent of the defense’s snaps—Ross Cockrell has earned a 68.2 Pro Football Focus grade (placing him in the “backup” range on the scale) over the first four games. Jamel Dean sits at a 61.5 grade over 55 percent of the snaps.

Sherman, who only made it into five games last year, is trying to learn a new system on the fly. In his first game with the team, he earned a 54.7 grade while allowing eight catches on as many targets.

The Buccaneers still have an excess amount of talent at tight end, so shipping someone like O.J. Howard (three targets over the first four games) for someone like Minnesota’s Cameron Dantzler could provide instant production and long-term upside at a premium position.

The Philadelphia Eagles need an emergency solution in front of Jalen Hurts.

Those Eagles let Hurts absorb eight sacks over a 1-3 start while he posted a strong seven touchdowns against two interceptions. But it’s hard for the Eagles to both win games and decide whether Hurts is really the future (while clutching what could be three first-round picks in the next draft) when he’s always under so much pressure.

It doesn’t help that Isaac Seumalo and Brandon Brooks sit on reserve lists, left tackle Andre Dillard has only started three games while battling a knee injury, Jordan Mailata at the same spot has played in just three games, and right tackle Lane Johnson has missed two over the first five. Rookie Landon Dickerson had a 61.3 PFF grade over the first four games while trying to fill in on the interior.

Given the presence of so many draft assets, the Eagles could easily cough up a mid-round pick to a team like Atlanta for a 2019 first-round pick such as Kaleb McGary. It’s not only insurance but also potentially a long-term solution at a tackle spot.

At this point, something is better than nothing given the revolving door of names that get nods as starters, spoiling any chance for one unit in front of Hurts to develop.

Denial of responsibility! NewsUpdate is an automatic aggregator around the global media. All the content are available free on Internet. We have just arranged it in one platform for educational purpose only. In each content, the hyperlink to the primary source is specified. All trademarks belong to their rightful owners, all materials to their authors. If you are the owner of the content and do not want us to publish your materials on our website, please contact us by email – [email protected]. The content will be deleted within 24 hours.
best sports newsdesperatelynews update sportsnewsupdateNFLsports newssports updatestrike

The Best Espresso Machines for the Home Barista

Don’t expect me to be polite and calm on radio, says Hamilton | Racing News – Times of India