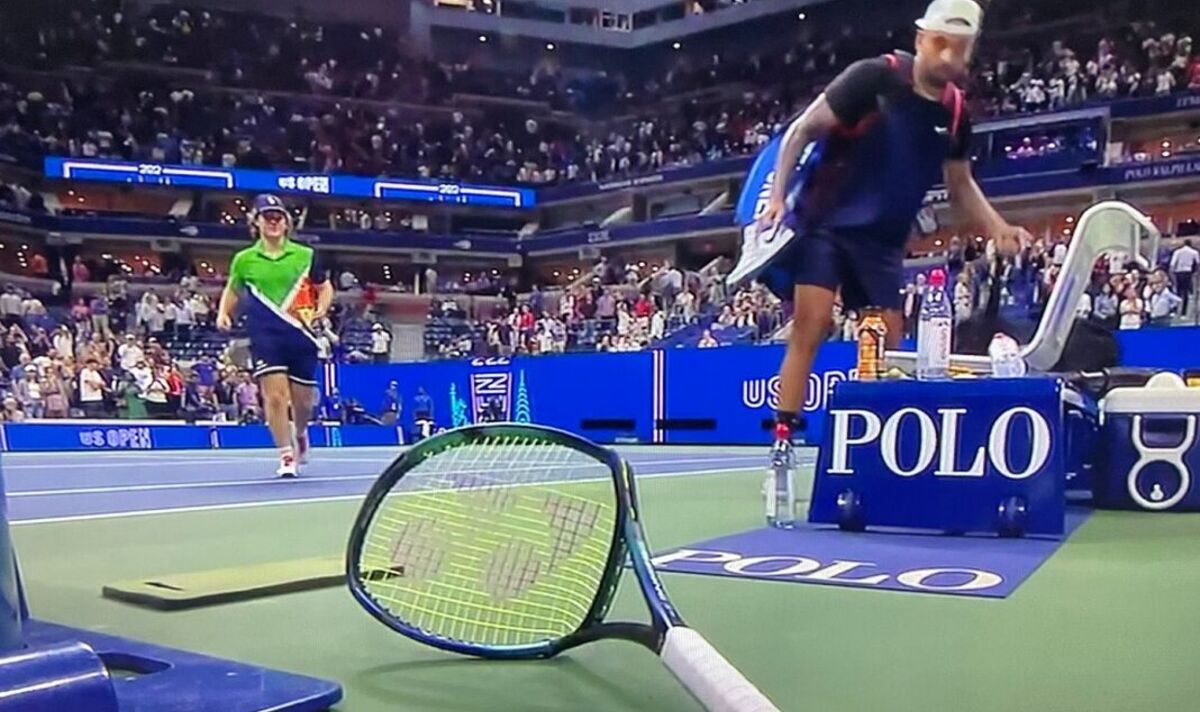 Nick Kyrgios smashed not one but two of his rackets after he fell to a five-set defeat to Karen Khachanov at the US Open. The Australian was broken early in the fifth set and could not recover the deficit to the Russian and exited the competition at the quarter-final stage.

It had been a marathon match between the two first-time US Open quarter-finalists with the five-set affair being wrapped up at 1am local time. The match length had clearly taken its toll on Kyrgios as he took it out on his equipment.

The Australian had been playing catch-up throughout the match with Khachanov winning the first and third sets 7-5. The Aussie hit back in the second and fourth to take the match to a decider but was broken in his first service game, causing him to lose the match.

As the camera focused on the Russian following the biggest win of his career, microphones picked up Kyrgios taking out his frustrations in the background. It then panned round to the world No 25 who could be seen standing over a mangled racket on the floor. He then angrily walked off the court, with cameras losing sight of him as he headed towards the changing room.

It was not the first time Kyrgios had broken one of his tools during the match, after he received an on-court warning for smashing another racket and his water bottle at the end of the third set. He had four break points over the course of the middle set but went on to lose after being broken by the World No 31 in the final game. Ball kids and court attendants were forced to clean up the water he had chucked all over the Arthur Ashe Court.

He also took the set loss out on his team shouting up at his player box “Do you guys even know what a break point is? It’s f*****g sad.” While he tried to prepare himself for the fourth set.

The frustration displayed by Kyrgios towards the end of the match is a marked difference from the emotions he felt before the tournament after he claimed he was looking forward to getting the competition over and done with so he could return Down Under.

“A big part of me just wants the US Open to be over so I can go home,” he told reporters ahead of his first round match against close friend Thanasi Kokkonakis. “It’s just another tennis match to me. Whether I win or lose, it’s always gonna be the same for me: I get to go home, it’s a win-win. For me, if I win, it’s more money and another great result. And if I lose, I get to go home.”

It appears he no longer feels this way given his actions after being bested by Khachanov – but he may yet take solace from the fact he can now return home. He is, though, on the entry list for the ATP500 in Tokyo despite his desire to go back to Australia.

Denial of responsibility! NewsUpdate is an automatic aggregator around the global media. All the content are available free on Internet. We have just arranged it in one platform for educational purpose only. In each content, the hyperlink to the primary source is specified. All trademarks belong to their rightful owners, all materials to their authors. If you are the owner of the content and do not want us to publish your materials on our website, please contact us by email – [email protected]. The content will be deleted within 24 hours.
angrybest sports newsDefeatKyrgiosnews update sportsnewsupdateNickOpen

As Serena leaves, Nadal loses, Federer absent, is era over?

Rafael Nadal says ‘a part of his life left’ when…

Fake online reviews: New guidelines and how will they…

Magnificent Kylian Mbappe has France scoring records in his…