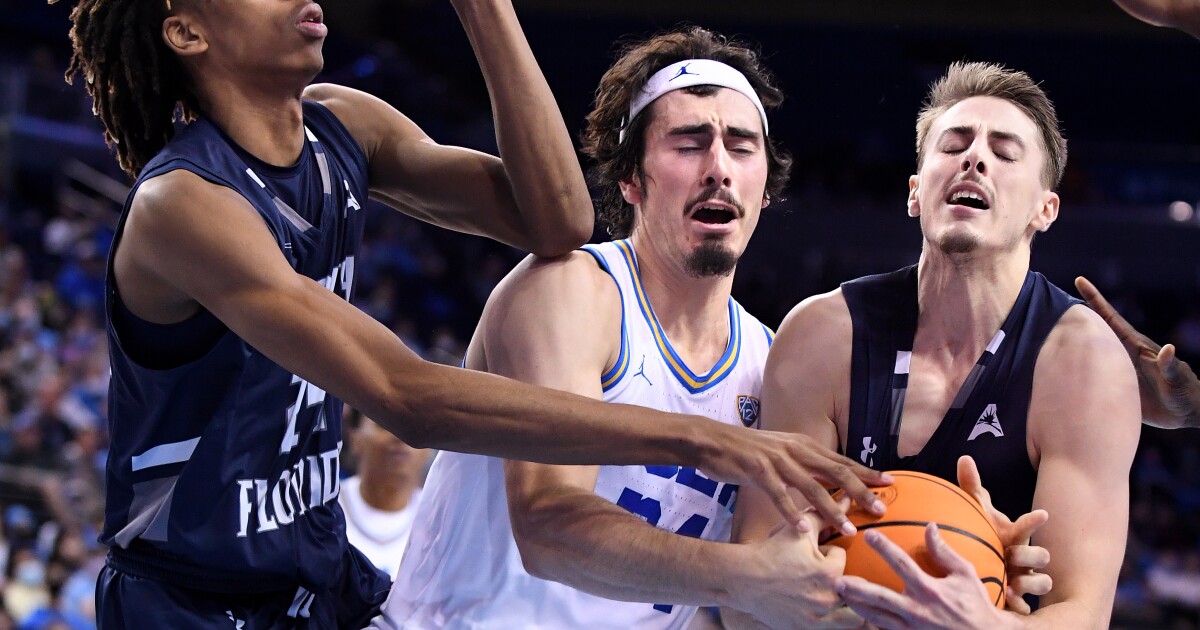 No. 2 UCLA tightens up defense to handle North Florida easily with 98-63 win

UCLA center Myles Johnson thrust his massive arms into the air, providing a wall of muscle there was no getting around.

North Florida’s Jonathan Aybar tried anyway, awkwardly releasing the ball in a futile attempt to get it over the defender’s 7-foot-7 wingspan. The ball never reached the basket, falling into Johnson’s hands to send the Bruins running the other way early in the second half.

After Johnson went to the bench and the Bruins’ defense faltered, North Florida’s Jadyn Parker meeting no resistance on his way into the lane for a dunk, UCLA coach Mick Cronin bolted off the bench and motioned for his top interior defender to re-enter the game.

The graduate transfer from Rutgers triggered roars from the crowd when he blocked a shot, following it moments later with a steal. The repeated stops for a defense-starved team showed why Cronin had been so eager to import Johnson last spring, calling him 10 minutes after his name went into the transfer portal even though the Bruins were in the Final Four.

Johnson helped his new team drastically tighten its defense in the second half Wednesday night at Pauley Pavilion, just what was needed for second-ranked UCLA during a 98-63 victory that qualified as an improvement over what had preceded it two days earlier.

“His size is his strength,” Cronin said, “so he’s got to impose it on his opponents, which I thought he did a better job of tonight.”

Cronin had eviscerated his team for its lackluster defense against Long Beach State, when the Bruins allowed two guards to combine for 57 points while making 23 of 30 shots. Cronin didn’t care that his team scored 100 points and won by 21, saying he could have scored on some of his players if he had a pair of sneakers.

The Bruins (4-0) finally added some defense to go with their latest high-scoring display, thanks in large part to Johnson’s strong second-half effort. The redshirt senior logged both of his blocks and both of his steals to go with eight of his 13 rebounds after halftime, also finishing with five points.

“Coach Cronin always emphasizes I’m always the biggest person out there,” said Johnson, who grabbed nine of his rebounds on the offensive end, “and I think today I made that pretty well known.”

UCLA point guard Tyger Campbell sunk all four of his three-pointers on the way to 13 points after making improved long-range accuracy a priority in the offseason.

“I worked on my base and holding my follow-through and a couple different things,” Campbell said, “but coach has just told me he has confidence in me and he just tells me to go and he doesn’t really restrict me at all. He trusts me with the shots I take and I just try to take the right ones and the open ones.”

Campbell has now made 11 of 18 shots from long distance (61.1%) this season after having made only 25% last season. Cronin said Campbell routinely wins timed three-point shooting drills against teammates who are more widely known as sharpshooters after having made small tweaks in which he releases the ball farther off his shoulders and finishes on his toes.

“A lot of it with him I think is just his confidence,” Cronin said. “You know, I tried to spend really more time on his head than his form. He knows for us to be where we need to be, we need him to be able to knock down open shots.”

For North Florida (0-5), it was the merciful end to a winless season-opening trip to five arenas in three states. Carter Hendrickson scored 11 points for the Ospreys, who were held to 37.1% shooting for the game and 30 points in the second half.

Cronin said his team still had a long way to go to be where he wanted as far as its ability to stop teams.

“We’re not to a point yet where we’re making multiple rotations defensively,” Cronin said.

UCLA was still without redshirt senior forward Cody Riley after he sprained the medial collateral ligament in his left knee during the season opener against Cal State Bakersfield. Cronin said there was a minimal chance that Riley could play next week against top-ranked Gonzaga.

Denial of responsibility! NewsUpdate is an automatic aggregator around the global media. All the content are available free on Internet. We have just arranged it in one platform for educational purpose only. In each content, the hyperlink to the primary source is specified. All trademarks belong to their rightful owners, all materials to their authors. If you are the owner of the content and do not want us to publish your materials on our website, please contact us by email – [email protected]. The content will be deleted within 24 hours.
best sports newsdefenseEasilyFloridahandlenews update sportsnewsupdateNorth

BT, Sky and TalkTalk users urged to make one crucial check about their broadband speeds