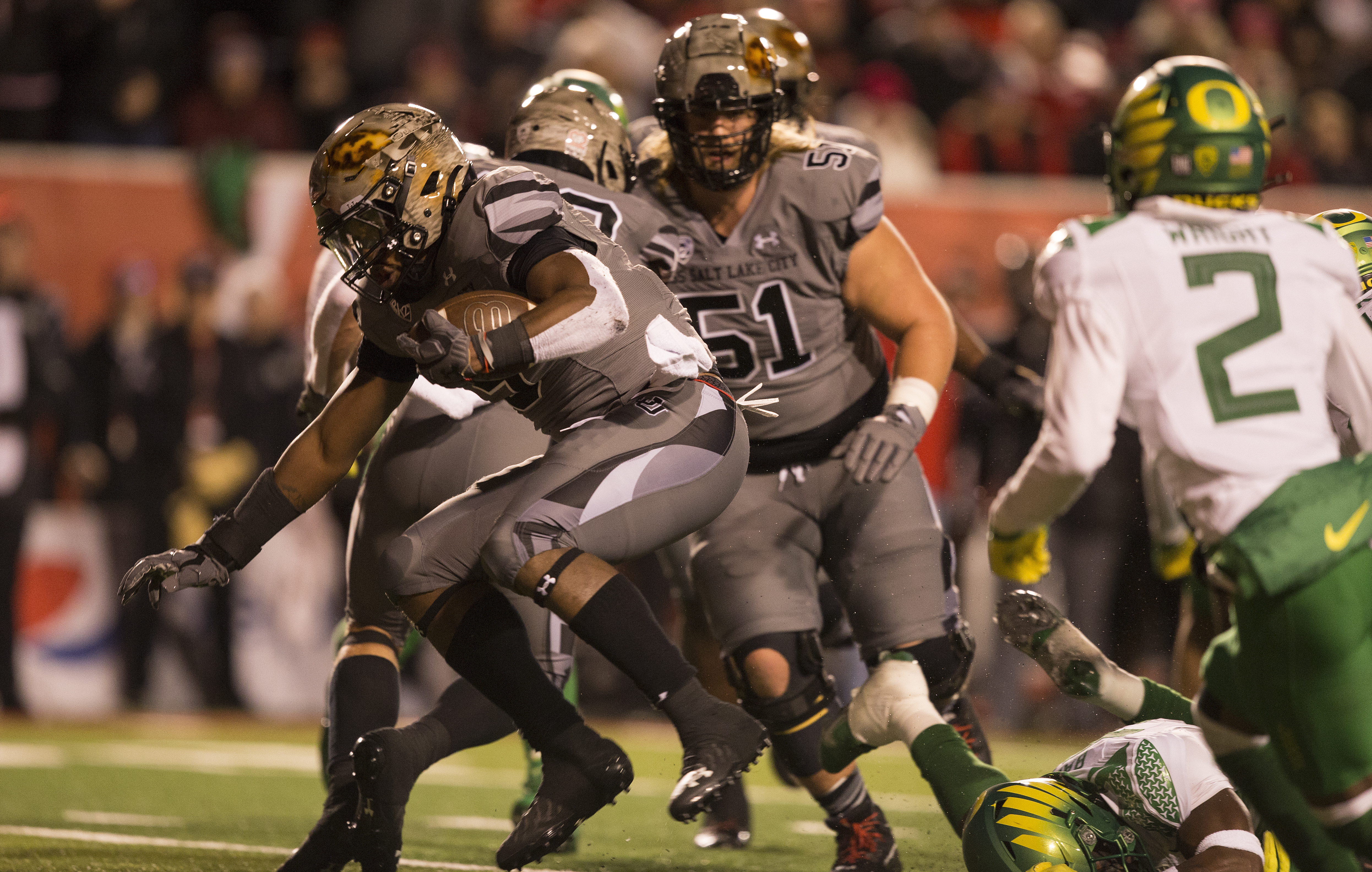 The No. 23 Utah Utes upset the No. 3 Oregon Ducks 38-7 on Saturday for their fourth straight win. Kyle Whittingham’s squad improved to 8-3 and is on pace to win the Pac-12 South.

While Utah and Oregon are still on course to meet in the Pac-12 Championship Game, the Ducks’ second loss significantly hurts their College Football Playoff chances.

Utah Dominates in Every Facet

From defense to special teams, the Utes dominated in every facet in Sunday’s win over the Ducks. Running back Tavion Thomas kicked things off with his 15th rushing touchdown of the year to tie the school record for most rushing scores in a single season.

On Oregon’s second drive of the game, the Utes held the Ducks to a field goal attempt, which safety Cole Bishop blocked to force a turnover. Utah then punted on its next possession before quarterback Cameron Rising rushed in for a score to put the Utes up 14-0.

Thomas then punched in his second rushing touchdown of the game, 16th of the season, to take over Utah’s record for most rushing scores in a single season.

Not too long after that, Britain Covey returned a punt 78 yards for a touchdown to give the Utes a 28-0 lead before halftime.

Utah’s dominance continued in the second half as Rising orchestrated two more scoring drives to put the game out of reach for Oregon.

Brown was subpar in Saturday’s loss to the Utes, to say the least. The senior quarterback struggled mightily in the first half, completing just 5-of-13 passes for 74 yards as Utah was held scoreless.

Brown also rushed for 14 yards on five carries through the first two quarters. While he was better in the second half, his struggles continued as he completed just 12-of-22 passes for 157 yards and one touchdown.

Oregon’s slow start on offense made it extremely difficult for the team to attempt a comeback down 28-0, especially with the Utah defense playing well.

Oregon’s rushing attack was also pitiful as Travis Dye, Byron Cardwell and Brown combined for 63 yards on 23 carries. It was an uncharacteristic performance from the Ducks on the ground as they entered the game averaging 214.5 rushing yards per contest, which ranked third in Pac-12.

Oregon’s offensive performance against Utah had people questioning whether or not the Ducks are a true playoff contender. Some also mentioned that the Ducks’ passing attack needs to get better to be able to contend with other teams.

If there’s one thing we learned on Saturday night, it’s that Oregon would probably struggle mightily against teams like Georgia and Alabama.

Denial of responsibility! NewsUpdate is an automatic aggregator around the global media. All the content are available free on Internet. We have just arranged it in one platform for educational purpose only. In each content, the hyperlink to the primary source is specified. All trademarks belong to their rightful owners, all materials to their authors. If you are the owner of the content and do not want us to publish your materials on our website, please contact us by email – [email protected]. The content will be deleted within 24 hours.
best sports newsBlowoutLossnews update sportsnewsupdateOregonsports newssports update