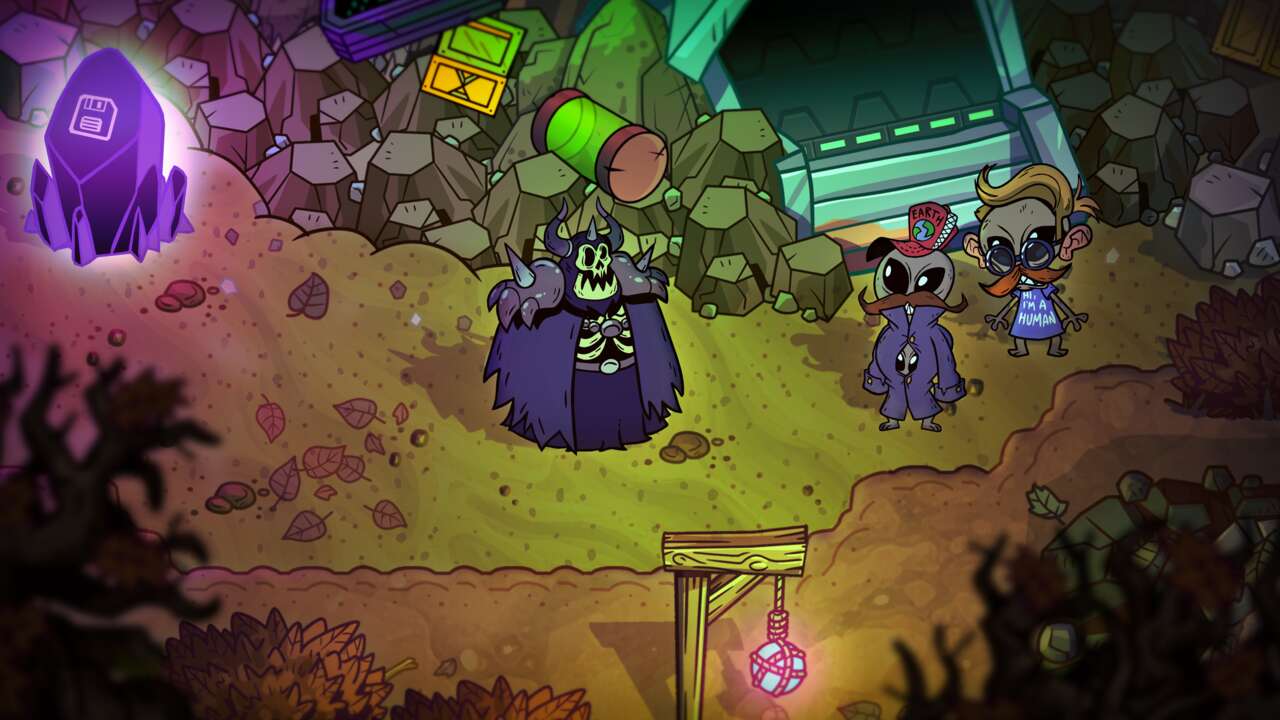 Nobody Saves The World Beginner’s Guide: Tips For Combat, Puzzles, And More

Nobody Saves The World is an action-dungeon-crawler, but not like any other you’ve played before. The new game from Drinkbox is a hodgepodge of wildly different gameplay elements. While it eases you in, there are a few things you may like to know before you start shapeshifting your way around its mix of dungeons and traps. Here are eight tips to get you heading in the right direction.

This may seem obvious, since changing into different forms is the crux of the game. But actually, it can be very easy to lean too hard on one of your favorites and overlook another one. Upgrading your forms is how you unlock new ones, as well as how you earn the vast majority of stars to open up dungeons. Don’t waste too much time chasing down a single form quest while other forms remain totally untouched.

The world of NSTW unfolds progressively as you advance and new areas become available as you gain new forms, but at each phase there are tons of nooks and crannies to explore across the map. Your curiosity will almost always be rewarded with treasure, enemy encounters to continue building up your experience, additional sidequests, and other goodies. Make sure to take a look around frequently and uncover as much of the map as possible at any given point in the story.

As you explore the world you’ll discover a few different guilds modeled after classic fantasy archetypes: Knights, Wizards, and Thieves. Each one will pack three or four quests at a time for you to complete, and completing a chain of the quests will give you an additional quest completion for that set. It’s an easy way to start racking up quest completion in one go, which will reward you with those valuable stars for progression.

But sometimes you can’t finish a quest yet

Once in a while, you’ll find a quest that just seems too tough or inscrutable for you. Chances are when that happens, you’ve hit a quest that’s just out of your reach. At those moments, just move along and look for other quests and then come back later. Sometimes they’ll rely on powers you don’t have yet, and there’s not much you can do about it.

One of the first forms you’ll earn–and one of the strangest–is the Egg. It has no innate combat abilities, and no combat-related quests to level it up. Instead, all of its levels are gained by finding five nests to sit in, which will then attract a large bird to help incubate it. It may seem useless at first, but make sure to find those nests. Upgrading the egg gives you some important abilities you may want to slot into other classes, and upgrading it is necessary to unlock the game’s final (and most powerful) form.

Dress for the occasion

When approaching a dungeon, you’ll be able to see what Wards are active and any other special modifiers. Make sure you tailor your forms and abilities to match. Wards are an absolute must for making your way through a dungeon, because they will effectively shield enemies from all damage until you break the ward. Special dungeon modifiers can be trickier, but look for ways to make the modifiers work for you. For example, in a dungeon where all damage is boosted on both yourself and enemies, you probably want high defense at the expense of strength, since the dungeon will be enhancing your strength anyway.

When a dungeon is also a puzzle

Similarly, some dungeon modifiers are designed like puzzles, meant to test your ability to make a build of a character that can survive it. Look for clever solutions instead of trying to always fight your way through on brute strength alone. One dungeon in particular, for example, boosts damage so much that pretty much everything is a one-hit kill, and then it throws rushing dynamite monsters at you. You’re not going to survive that kind of test on brawn alone, so look around your abilities for something that might prevent you from dying in a single strike.

You’ll find vendors around the world selling wares, some more useful than others. The best item to invest in early are any infinite quests, which will just let you passively gain experience as you play the game how you normally would. The next most important are any optional abilities the vendor is selling, so you can fill out your options. Finally, the vendor sells passive stat boosts to physical attack, physical defense, magical attack, and magical defense. Those have limited quantities, but it’s a good way to bulk up in a pinch. Least useful of all are stars, which are also sold in limited quantities. While stars are necessary to progress in the game, these are expensive and unnecessary. You’ll find plenty just by playing the game and completing form quests.

For more on Nobody Saves The World, check out our best forms and ability combos, as well as how progression works.

Denial of responsibility! NewsUpdate is an automatic aggregator around the global media. All the content are available free on Internet. We have just arranged it in one platform for educational purpose only. In each content, the hyperlink to the primary source is specified. All trademarks belong to their rightful owners, all materials to their authors. If you are the owner of the content and do not want us to publish your materials on our website, please contact us by email – [email protected]. The content will be deleted within 24 hours.
beginnersbest games newscombatgame updategames newsguidenews update gamesnewsupdate

Meet the Marketing Exec Who’s Been Making Her Mark at Apple, Uber and Netflix

‘Among The Trolls’ is a fantasy survival game…