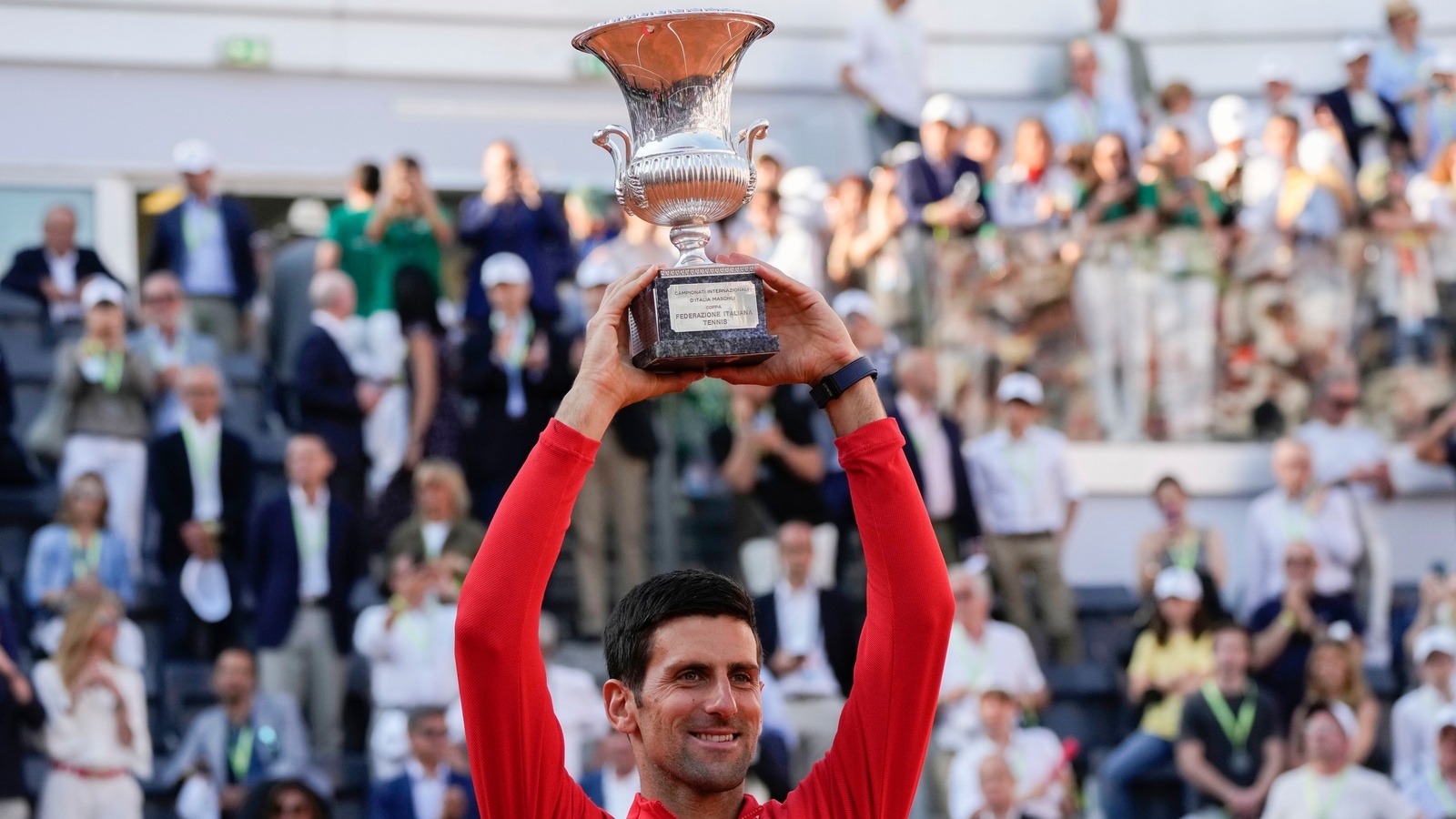 Novak Djokovic raised his first trophy of the year at the Italian Open on Sunday and showed that he’s back in top form exactly a week before the French Open starts.

After missing a large portion of the season because he wasn’t vaccinated against the coronavirus, the top-ranked Djokovic beat Stefanos Tsitsipas 6-0, 7-6 (5) for his sixth Rome title.

“I’ve been building my form the last few weeks,” Djokovic said. “It couldn’t be better timing coming into Roland Garros.”

Djokovic didn’t drop a set all week, having won his 1,000th career match over Casper Ruud in the semifinals.

Djokovic, who was deported because of his un-vaccinated status ahead of the Australian Open, hadn’t won a tournament since raising the Paris Masters trophy in November.

“This year it was a particular situation. With everything that happened in Australia, it took some time,” Djokovic said. “I found my best shape here. I’m going to Paris with a lot of confidence.”

It was Djokovic’s 12th final at the Foro Italico.

“This court has always been very, very special,” he said. “It’s given me joy when I really needed positive sensations. Whenever my form was a bit down I’ve found energy in this city.”

Djokovic needed only a half hour to win the opening set, during which Tsitsipas got so frustrated at one point that he banged his racket against his bag during a changeover and mangled the frame.

After falling behind early in the second set, Djokovic stepped up his game when Tsitsipas served for the set at 5-3.

First, Djokovic ripped a forehand cross-court return winner that landed on the line, then on the next point he pushed Tsitsipas from corner to corner before the fifth-ranked Greek player resorted to a drop shot attempt that landed in the net. Djokovic celebrated with a series of fist pumps as the crowd chanted his nickname: “NO-LE, NO-LE.”

When a backhand from Tsitsipas sailed wide on the first match point, Djokovic simply raised his arms and smiled.

During the trophy ceremony, Djokovic made a special dedication: “Today at 4 (p.m.) when we started this match, my son Stefan, who is 7 years old, was playing his first tennis match. I hope he won. This is for him.”

The 20-time Grand Slam champion reached the final of his home Serbia Open last month. He was beaten by 19-year-old Carlos Alcaraz in the Madrid Open semifinals last week.

Denial of responsibility! NewsUpdate is an automatic aggregator around the global media. All the content are available free on Internet. We have just arranged it in one platform for educational purpose only. In each content, the hyperlink to the primary source is specified. All trademarks belong to their rightful owners, all materials to their authors. If you are the owner of the content and do not want us to publish your materials on our website, please contact us by email – [email protected]. The content will be deleted within 24 hours.
best sports newsDjokovicdjokovic italian openformhesItalianitalian opennews update sports

I will rate this one of my biggest wins: Kidambi Srikanth | Badminton News – Times of India