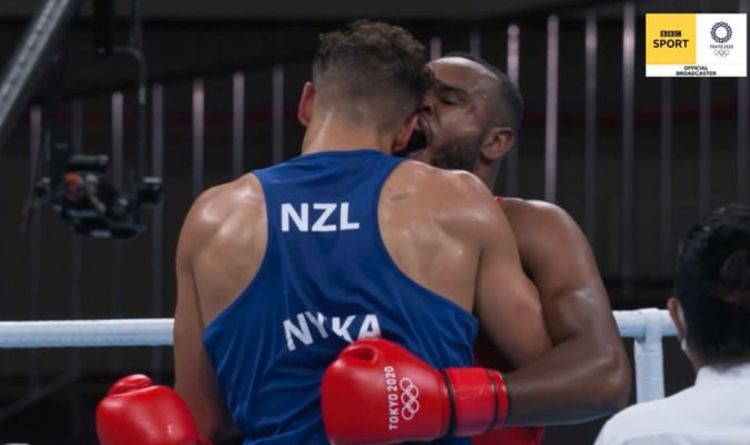 The Olympic boxing took a ferocious turn on Tuesday as Moroccan Youness Baalla tried to savagely bite his opponent’s ear. The 22-year-old attempted the bite after falling behind on a day to forget as he eventually crumbled to a 5-0 loss to New Zealand’s David Nyika.

Nyika, who was one of New Zealand’s flag bearers at the Games opening ceremony, escaped from the incident unharmed to secure a quarter-final spot against Uladzislau Smiahlikau of Belarus.

The unsavoury incident brought back memories of the infamous night in 1997 when Mike Tyson was disqualified for biting a chunk out of Evander Holyfield’s ear in a world heavyweight title fight.

That proved one of the sport’s most dramatic nights ever. The American was subsequently banned from professional boxing.

“He wouldn’t exchange properly,” Nyika said following the Olympic incident: “He ducked his head, he bit me, he hit me below the belt.

“I didn’t think he’d get away with it. He tried to bite my cheekbone – he probably just got a mouthful of sweat.

“He didn’t get a full mouthful. Luckily he had his mouthguard in and I was a bit sweaty. But come on man, this is the Olympics – get your s**t together.

“He’s been on the scene for a while but he’s usually a calm, composed character.

“That happened and I was like, ‘I thought we were having fun,’ but he clearly wasn’t.

Nyika’s coach Billy Meehan was equally as angry after the attempted bite.

Baalla escaped punishment at the time but was later retrospectively disqualified for the incident with officials stating he “very clearly intended to bite the ear/face of his opponent.”

Nyika, 25, later took to Instagram, however, to defend his opponent.

He posted: “The heat of battle can bring the best AND the worst out of people. This is part of sport. I have nothing but respect for my opponent and can appreciate the frustration he must have felt. *Please don’t reach out to him if you have nothing nice to say.

Nyika is now just one fight away from securing New Zealand’s first boxing medal since 1992.

Denial of responsibility! NewsUpdate is an automatic aggregator around the global media. All the content are available free on Internet. We have just arranged it in one platform for educational purpose only. In each content, the hyperlink to the primary source is specified. All trademarks belong to their rightful owners, all materials to their authors. If you are the owner of the content and do not want us to publish your materials on our website, please contact us by email – [email protected]. The content will be deleted within 24 hours.
best sports newsbiteBoxerbringsFightflashbacksMikenews update sports

Gaming could reduce the gamble for users of online finance

Sourav Ganguly To “Step Down” From ATK Mohun…