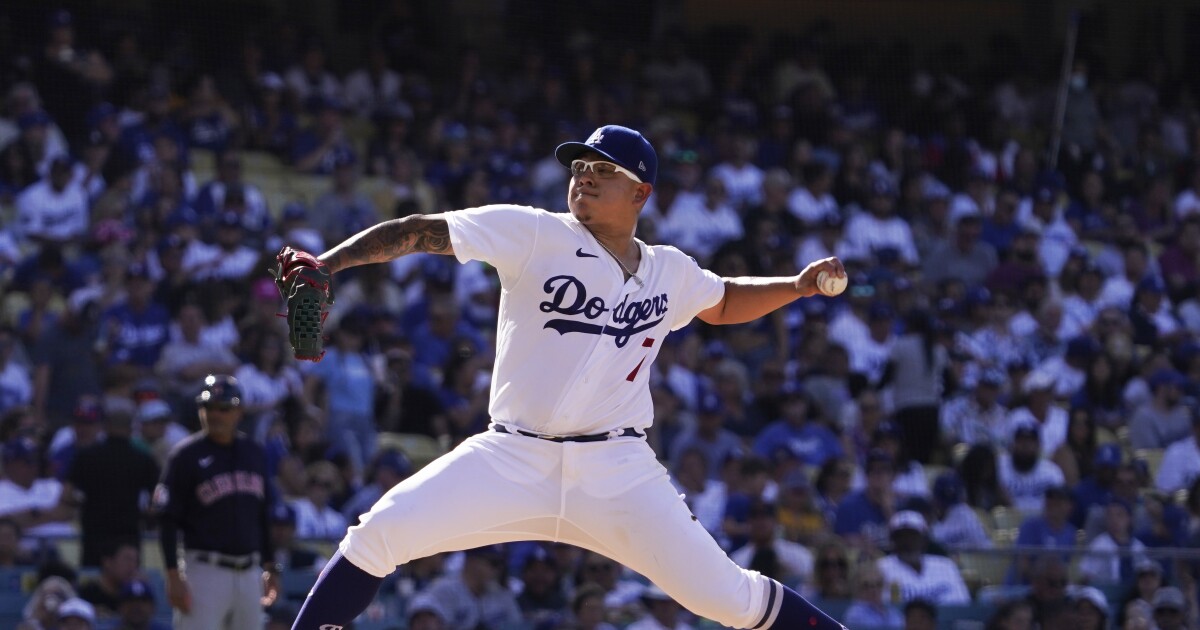 It might be expected that Sandy Koufax’s presence would inspire a pitchers’ duel. Instead, it triggered an overdue Dodgers offensive outburst in a 7-1 victory Saturday over the Cleveland Guardians.

Check that. Consider one pitcher sufficiently motivated by the fact that the man who threw four no-hitters and won three Cy Young and two World Series most-valuable-player awards in the 1960s sat next to the Dodgers dugout.

Julio Urías ended a personal three-game losing streak, giving up one unearned run and two hits in six innings. He is Exhibit A of why a pitcher’s win-loss record can be a poor indicator of effectiveness. Last season, Urías was 20-3 with a 2.96 ERA. This season, his ERA is 2.56 but his record is 4-6.

Before the Dodgers batted in the first inning Saturday, clips from Koufax’s statue unveiling earlier in the day were shown on the video board with Clayton Kershaw lauding his mentor and an unexpectedly ebullient Koufax expressing sincere thanks to family, fans and former teammates.

The video ended, and the public-address announcer recognized Koufax. The crowd thundered with applause as he stood and waved, turning to the cheering crowd, raising his arms high above his head, smiling and waving some more.

Koufax relished the moment, then the 50,078 fans enjoyed a one-sided Dodgers win.

The Dodgers stranded two runners in the first before getting to work, scoring three runs in the second and two in the third. Trea Turner’s ninth home run keyed the first rally, and run-scoring extra-base hits by Justin Turner and Gavin Lux keyed the second.

Eight Dodgers had one hit in their first two at-bats against Guardians starter Cal Quantrill, and the ninth, Austin Barnes, drove in the first run with a sacrifice fly. The onslaught continued against the bullpen, with the Dodgers tacking on runs in the sixth and seventh innings.

The Guardians were without their best player, Jose Ramirez, who was sidelined because of a sore wrist. The Dodgers were without Mookie Betts for the second day in a row. Betts injured a rib when he collided with Cody Bellinger on Wednesday, but X-rays were negative and Roberts said Betts might play Sunday.

His trademark red mop flopping under his cap, Dustin May threw off the Dodger Stadium mound after the Koufax statue unveiling and ahead of the game.

May, who had Tommy John surgery nearly 13 months ago, will throw to hitters in three or four live batting practice sessions before a minor league rehabilitation assignment.

If all goes well, he is due to return by August. May, 24, was off to a tremendous start last season before the injury, posting a 2.74 ERA while striking out 35 and giving up only 16 hits in 23 2/3 innings over five starts.

Denial of responsibility! NewsUpdate is an automatic aggregator around the global media. All the content are available free on Internet. We have just arranged it in one platform for educational purpose only. In each content, the hyperlink to the primary source is specified. All trademarks belong to their rightful owners, all materials to their authors. If you are the owner of the content and do not want us to publish your materials on our website, please contact us by email – [email protected]. The content will be deleted within 24 hours.
best sports newsDayDodgersEndsGuardiansHonoringJulioKoufax