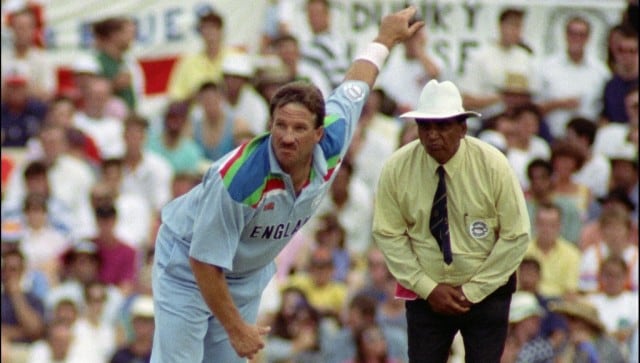 On this day: Sachin Tendulkar faced off against Ian Botham for first and only time in World Cup – Firstcricket News, Firstpost

On 22 February, 1992, two cricketing greats, Sachin Tendulkar and Sir Ian Botham, faced off against each other for the first and only time. The high stakes match, which was part of the 1992 World Cup, was held in Perth, Australia.

Before the start of the 1992 ICC World Cup, India had been thrashed 4-0 in the Test series against Australia. The team had also fared badly in the Tri-Series Cup with Australia and West Indies. Led by their young skipper Mohammad Azharuddin, the Men in Blue were itching to make a comeback through their World Cup performance.

Ian Botham of England at the 1992 World Cup. AFP

It was the first World Cup for legendary right-hand batsman Sachin Tendulkar. On the other hand, many greats, including Kapil Dev, Ian Botham, Ravi Shastri and Graham Gooch, were playing their final ICC World Cup tournament.

In their first 1992 World Cup game, the relatively young Indian team faced off against the England tam, led by Gooch. The game was off to a great start, with India getting Botham’s wicket at just 21. However, the game soon turned in England’s favour after Kiran More dropped Gooch’s catch at 36. According to a report in Cricket Country, the dropped catch was probably the moment when things changed irrevocably in England’s favour.

Gooch went on to score 51 off 89 and create a solid partnership with Robin Smith. After Smith was dismissed for 91, England collapsed, reaching just 236/9 at the end of 50 overs.

The match looked set in India’s favour. When Ravi Shastri and Kris Srikkanth walked on to open for the Men in Blue, there was hope that India would be able to begin their World Cup journey with a win. However, with two quick wickets down at 63 runs, the hope diminished.

Then, Sachin Tendulkar took to the crease. The young batter, who had already earned a formidable reputation, played steadily with Ravi Shastri to take India towards victory. But that was not to be.

England chose Botham to bowl against Tendulkar. Nicknamed Beefy, the right-arm fast bowler was playing his final World Cup. The grizzled all-rounder was facing the Master Blaster for the first time in international cricket. The young batsman was no match for Botham and got dismissed at 35.

Botham was awarded the Player of the Match. The right-arm bowler earned the title ‘Old Lion’, for his performance during the tournament.

Denial of responsibility! NewsUpdate is an automatic aggregator around the global media. All the content are available free on Internet. We have just arranged it in one platform for educational purpose only. In each content, the hyperlink to the primary source is specified. All trademarks belong to their rightful owners, all materials to their authors. If you are the owner of the content and do not want us to publish your materials on our website, please contact us by email – [email protected]. The content will be deleted within 24 hours.
best sports newsBothamCupDayfacedFirstcricketFirstpostIan

Chiefs given all clear to leave Super Rugby bubble