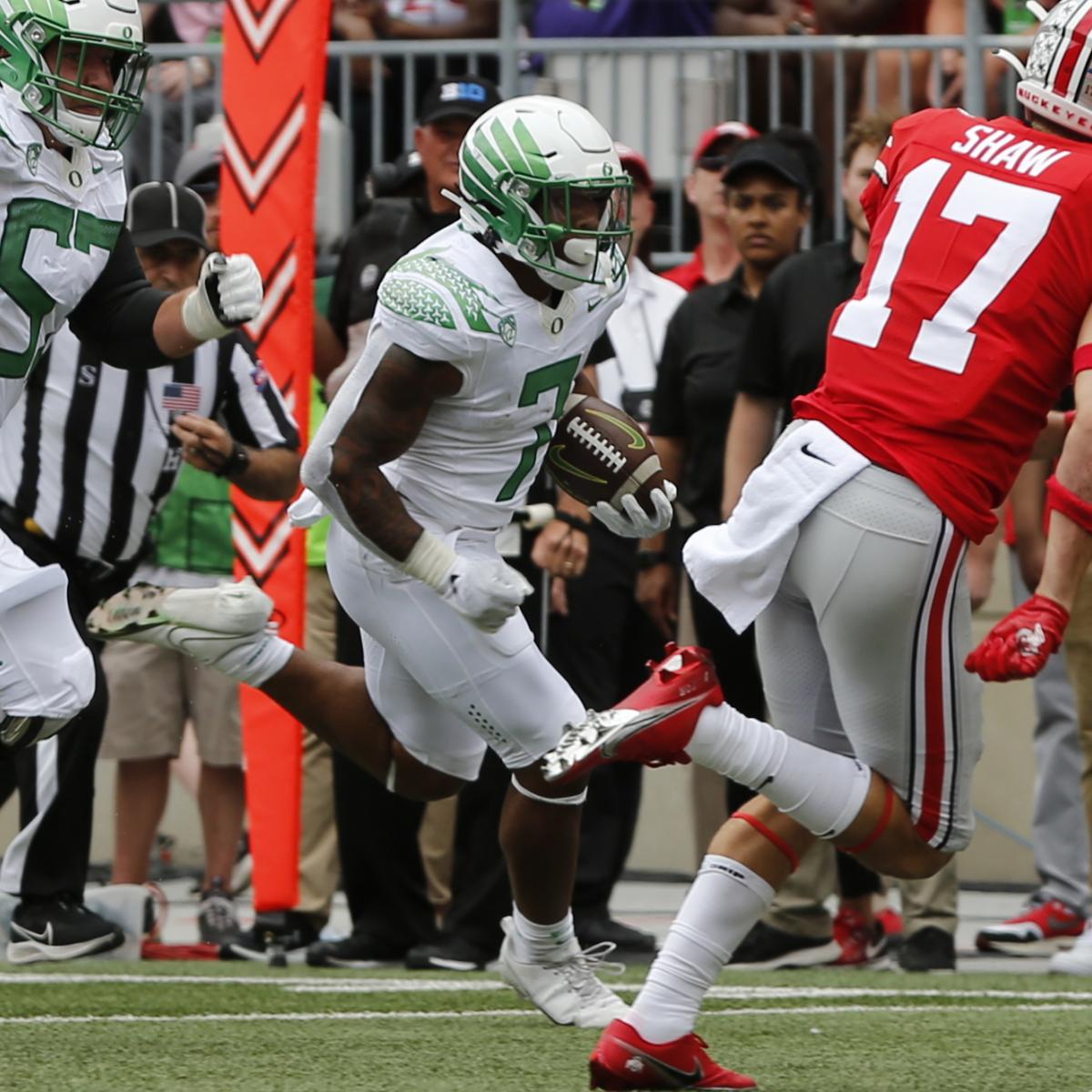 There were signs this was coming. There were signs that Ohio State, despite all that offense and all those glorious wideouts, despite a stable of blue-chip quarterbacks and the perfect head coach to accompany them, despite playing in a conference in which it is rarely tested, would lose a game like this.

These signs have been lingering for months—back to January when the Buckeyes defense was torched by Alabama in the national championship. Back only nine days ago when Minnesota, which barely slipped past Miami (Ohio) on Saturday, nearly pushed Ohio State to the brink.

And Saturday afternoon, despite the return of one of the best home fields in all of college football, those concerns were realized. Despite entering the game as more than a two-touchdown underdog, Oregon beat Ohio State in Columbus 35-28.

All told, Oregon averaged more than seven yards per carry. And while the Ohio State defense seemed to find momentum late, thanks in part to a stadium full of loud, anxious fans, it wasn’t enough.

CJ Verdell didn’t just run wild for the Ducks. He ran himself into the Heisman Trophy conversation for those who chart such activity in early September.

He finished with 161 rushing yards, 34 receiving yards and three touchdowns. Much of his damage came in the first half, and his production set the tone.

He was a force, and he will be the fixture of a team that will likely be accompanied by many more eyeballs moving forward.

And when Brown found an open wide receiver, they were often wide-open. The Ohio State secondary, which was a concern in 2020, is a concern again. An injury to safety Josh Proctor, who was carted off during the loss, won’t help matters.

Head coach Ryan Day didn’t have much to opine on when asked about his defense postgame. Well, except for the obvious.

On the other side, the Ohio State offense did its part. At least mostly. A late interception by C.J. Stroud halted the momentum on the Buckeyes’ comeback. In just his second start, Stroud threw for 484 yards and three touchdowns.

He missed on a handful of throws, especially early. There were drops. A few of his incompletions came because his target slipped on the turf. But given the scenario, he largely did what was asked of him.

Three Ohio State wideouts finished with more than 115 yards. Running backs Miyan Williams and Treveyon Henderson averaged more than five yards per carry. And though Ohio State totaled more than 600 yards of its own, it still lost on the scoreboard.

And so, the two favorites to win their respective conferences will carry onward. Oregon, which was without Kayvon Thibodeaux, maybe the best defensive player in college football, has momentum and the hope he will return to the field soon.

The defensive end suffered an injury in the Ducks’ opener, and he will have ample time to rest if needed. Oregon plays Stony Brook next week followed by Arizona. A late October game against UCLA and former Oregon head coach Chip Kelly might feature incredible juice.

In the meantime, the Ducks are certain to catapult upward in the Associated Press poll. And if Verdell’s excellence continues, he is likely to blossom into a much bigger star than he already is.

Oregon isn’t just a team on the rebound with plenty of recruiting momentum. With a massive road win in its back pocket for its College Football Playoff resume, the expectations for this season are vastly different than they once were.

For Ohio State, it’s about picking up the pieces. An out-of-conference loss against a good team shouldn’t doom a season, and this certainly won’t. But this is Ohio State, and anything less than a playoff appearance is a disappointment. Even that doesn’t satisfy the appetites of all.

While the sky isn’t falling, the issues that are plaguing the Buckeyes won’t be fully repaired this year.

That is not to say that the defense can’t and won’t improve; it almost certainly will. Against a team such as Penn State, however, the most daunting remaining opponent on the schedule, these issues could metastasize.

These are the problems most football programs would love to have. But they are there nonetheless, and Ohio State’s normally blemish-free September has been broken.

And if the Buckeyes are to compete for the national championship once again, a transformation will be required. Whether such transformation is possible is another story.

Loading...
Denial of responsibility! NewsUpdate is an automatic aggregator around the global media. All the content are available free on Internet. We have just arranged it in one platform for educational purpose only. In each content, the hyperlink to the primary source is specified. All trademarks belong to their rightful owners, all materials to their authors. If you are the owner of the content and do not want us to publish your materials on our website, please contact us by email – [email protected]. The content will be deleted within 24 hours.
Loading...
best sports newsdefenseexposenews update sportsnewsupdateOhioOregonOSU