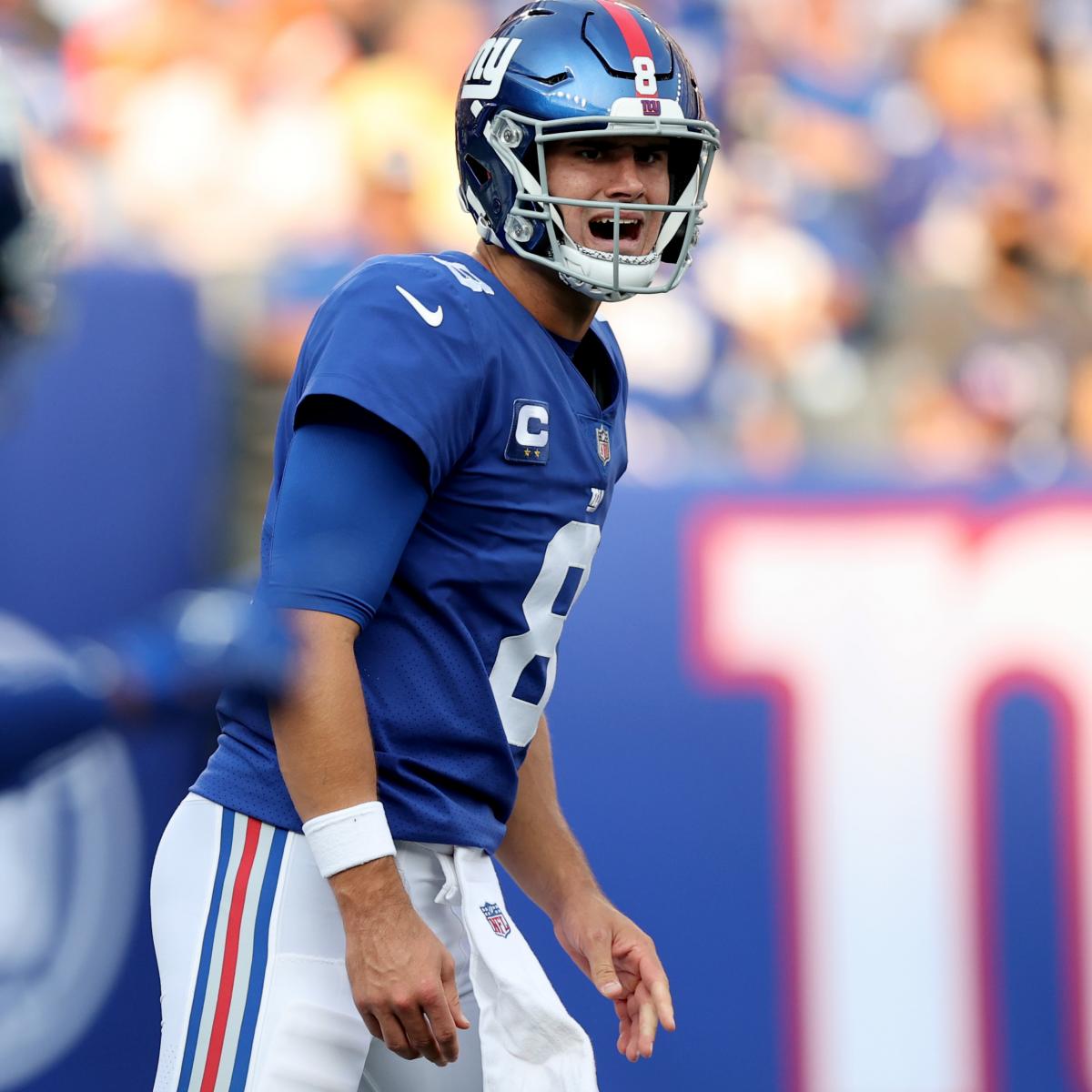 Panic Meter for NFL Teams That Lost in Week 1 Blowouts

After nearly seven months without NFL games that have any significance in the win-loss column, we often overreact to Week 1 outcomes.

During the offseason, front-office executives and coaches make roster moves to set up the franchise for short- or long-term success. Some teams focus on veteran acquisitions for an immediate playoff push while other clubs tear down the foundation left over from the previous regime in a rebuild.

Either way, fans are eager to see progress and the fruits of offseason player development.

However, when a team falls flat in a season opener, you can feel a fanbase’s optimism quickly turn into skepticism. While some clubs can flush a Week 1 stinker down the toilet, other squads have deeper issues that can derail a season.

Let’s take a look at seven teams that lost by double-digit margins. We’ll use a panic meter that ranges from 1-10 with low numbers that signal minimal concerns to higher numbers for full-scale alarm mode.

After an offseason of uncertainty between the Green Bay Packers and Aaron Rodgers, he rejoined the team at the beginning of training camp. According to ESPN’s Adam Schefter, the front office agreed to restructure his deal, which seems like a Band-Aid on a fractured relationship.

Nonetheless, Rodgers committed to play for the Packers this year, which gives this team a shot to win the Super Bowl. Green Bay has reached back-to-back NFC Championship Games—only to fall one stop short of the title game.

Packers fans likely expected Rodgers to pick up where he left off from his 2020 MVP year, but the New Orleans Saints defense stifled him and the offense, allowing just three points. He threw for just 133 yards and two interceptions.

Rodgers talked about using the embarrassing 38-3 loss as motivation.

“This is a good kick in the you-know-where to hopefully get us going in the right direction,” he said.

Perhaps Green Bay took New Orleans lightly with Jameis Winston, who threw for five touchdowns, under center in place of now-retired Drew Brees. Regardless of the reason for the Packers’ poor performance, they’ll have an extra day off to regroup before a Monday Night Football matchup with the Detroit Lions at Lambeau Field.

Every NFC North team lost its season opener. The Packers will play a Lions squad that fell behind the San Francisco 49ers 38-10 before a few late touchdowns tightened the score margin. With Rodgers healthy, Green Bay has nothing to worry about in a winless division with a favorable matchup next on the schedule.

The Houston Texans stand alone atop the AFC South with a win. At home, they thrashed the Jacksonville Jaguars 37-21.

The Texans went into the 2021 campaign in rebuild mode with journeyman quarterback Tyrod Taylor under center in place of Deshaun Watson, who requested a trade, according to ESPN’s Adam Schefter, and faces 22 lawsuits from women alleging sexual assault and misconduct.

While this seems like a code-red alarm, the Jaguars also have a roster that’s in the early stages of a rebuild. They have a first-time NFL head coach and defensive coordinator in Urban Meyer and Joe Cullen, respectively.

Since 2002, David Carr is the only No. 1 overall pick to win his team’s season opener as the starting quarterback, so Lawrence’s loss in his first NFL game shouldn’t raise any red flags. He threw for 332 yards, three touchdowns and three interceptions, though two of those scores came late in the game.

With a rookie quarterback and a new regime, the Jaguars will go through growing pains that include embarrassing losses. They will face a stout Denver Broncos defense, so the uneasiness about Lawrence’s early passing performances could go up a notch after next week.

The Atlanta Falcons hosted the Philadelphia Eagles and didn’t score a touchdown in front of their home crowd.

The Falcons settled for field goals on two red-zone trips, converted on just three of 14 third-down situations and gave up 99 yards via penalties.

Overall, Arthur Smith’s team had a sloppy, inefficient outing, and he took responsibility for the subpar performance.

Smith made the right statement at the podium, but that doesn’t excuse him for having his team ill-equipped for competition. Meanwhile, first-time head coach Nick Sirianni’s squad committed 14 infractions, but his offense accumulated 434 yards and scored touchdowns on all three of its red-zone trips.

Atlanta will have an even tougher matchup on the road against the Tampa Bay Buccaneers in Week 2. If the Falcons don’t clean up the penalties, they could fall into an 0-2 hole with two blowout losses.

As a first-time head coach, Smith has to right the ship before players begin to question his methods. Yet with a new regime, he’ll have plenty of time to steer this team back on the right track.

In an early afternoon shocker, the Arizona Cardinals throttled the Tennessee Titans 38-13 with a dominant performance in the trenches.

In a pinned tweet, Lewan accepted fault for his abysmal performance.

Ryan Tannehill didn’t have much time to throw, which limited the impact of wideouts Julio Jones and A.J. Brown. He took six sacks in total.

Titans fans booed offensive coordinator Todd Downing, who took over a top-five scoring offense from Arthur Smith. With Henry, Jones and Brown, this unit should have scored more than 13 points.

First-time defensive coordinator Shane Bowen also had a rough outing and didn’t have a counter for quarterback Kyler Murray, who threw for four touchdowns (one interception) and ran for a score.

While the Titans’ performance looked terrible on paper, both coordinators will need time to settle into their roles. Also, Tennessee remodeled its secondary, releasing Malcolm Butler, Adoree’ Jackson and Kenny Vaccaro. We should expect a group with significant turnover to go through an adjustment period.

Tennessee would fall to 0-2 with a loss to the Seattle Seahawks, but even then, the division would not be slipping away, as it is currently led by the rebuilding Houston Texans. If the Titans continue to look awful on both sides of the ball at the end of September, then they should hit the panic button.

The Indianapolis Colts may need to pull off a trade for a wide receiver.

Though quarterback Carson Wentz had a decent outing against the Seattle Seahawks, running backs Jonathan Taylor and Nyheim Hines tied for a team-leading six receptions.

The Colts have a deep wide receiver group that doesn’t feature a go-to playmaker. Zach Pascal caught two touchdown passes, one of which coming late in the game with Seattle up big, but he racked up only 43 receiving yards. Michael Pittman Jr., Mike Strachan and Parris Campbell all finished with fewer than 30 receiving yards.

Perhaps the Seattle Seahawks defense deserves some credit, but the Colts certainly missed T.Y. Hilton. He established a rapport with Wentz during the offseason, which generated some buzz, but the 31-year-old underwent neck surgery and landed on injured reserve.

While the Colts can beat teams on the ground with Taylor behind a physical offensive line and a solid defense, head coach Frank Reich isn’t going to scare any secondary with his group of pass-catchers. Wentz has a strong arm, but he doesn’t have explosive perimeter playmakers to stretch opposing defenses.

Unless Hilton makes a speedy and full recovery, the Colts should make a roster move to address their offensive issue. Next week, they’ll face the Los Angeles Rams, who looked electric against the Chicago Bears. Indianapolis runs the risk of losing consecutive games at home, which raises legitimate concern.

Initially, the Chicago Bears had a good start on the opening drive. Running back David Montgomery ripped off a 41-yard run. Rookie quarterback Justin Fields completed a nine-yard pass for a first down inside the Los Angeles Rams’ 10-yard line.

And then, the Bears fell apart.

The Rams tipped Andy Dalton’s pass, and cornerback David Long Jr. came down with the interception. Three plays later, quarterback Matthew Stafford unleashed a 67-yard rocket to wideout Van Jefferson for a touchdown. Los Angeles never looked back from that point and had control of the entire game.

In addition to the interception, Dalton lost a fumble and didn’t throw for a touchdown, going 27-of-38 for 206 yards. The veteran signal-caller also took three sacks behind a shaky offensive line. As a backup, Fields came in for spot duty. He completed both of his pass attempts and scored on a three-yard run.

Chicago had possession of the ball for 35:14 and still lost 34-14, which shows its defense also struggled throughout the night.

With defensive breakdowns, pass-protection issues and a quarterback who’s limited athletically, the Bears need a spark. Fields is the obvious answer, but head coach Matt Nagy has been fixated on Dalton as the starter.

Until Chicago turns the huddle over to Fields, the offense will look stale. Nagy’s stubbornness could hurt this team’s chance at a playoff berth.

In Week 2, Chicago will face the Cincinnati Bengals’ upstart offense that features quarterback Joe Burrow, wideout Ja’Marr Chase and running back Joe Mixon. Dalton may go down to his former team as the Bears drop to 0-2.

The New York Giants need to sound off the loudest alarm. In his third season, quarterback Daniel Jones doesn’t seem like he’s on track for a significant leap.

Jones led the league in fumbles for the 2019 and 2020 terms. Late in the third quarter Sunday, he scrambled and lost a fumble in the red zone. Big Blue had a chance to get within a score, but Jones’ turnover allowed the Denver Broncos to pull away.

Despite the addition of wideouts Kenny Golladay and rookie first-rounder Kadarius Toney and the return of running back Saquon Barkley, the Giants couldn’t cut through the Broncos’ stingy defense in the 27-13 loss. Even more concerning, Jones still has ball-security issues that hurt the offense in a crucial moment.

Furthermore, the Giants’ ninth-ranked defense from the previous season gave up 420 yards, surrendered first downs in three fourth-down situations and allowed the Broncos to convert seven of 15 third downs.

If the defense continues to struggle, Jones will have to lead the Giants on more scoring drives, but he’s hard to trust because of his tendency to give away possessions. Even with decent pass protection, the Duke product struggled to move the ball without a solid ground attack. As a team, Big Blue averaged three yards per rush attempt.

At some point, the Giants should consider an upgrade at backup quarterback over Mike Glennon in case head coach Joe Judge and offensive coordinator Jason Garrett want to make a change under center.

On a short turnaround, Jones has another tough matchup Thursday against the Washington Football Team. The 24-year-old signal-caller could lose some confidence if he struggles again.

Denial of responsibility! NewsUpdate is an automatic aggregator around the global media. All the content are available free on Internet. We have just arranged it in one platform for educational purpose only. In each content, the hyperlink to the primary source is specified. All trademarks belong to their rightful owners, all materials to their authors. If you are the owner of the content and do not want us to publish your materials on our website, please contact us by email – [email protected]. The content will be deleted within 24 hours.
Loading...
best sports newsblowoutslostMeternews update sportsnewsupdateNFLPanic