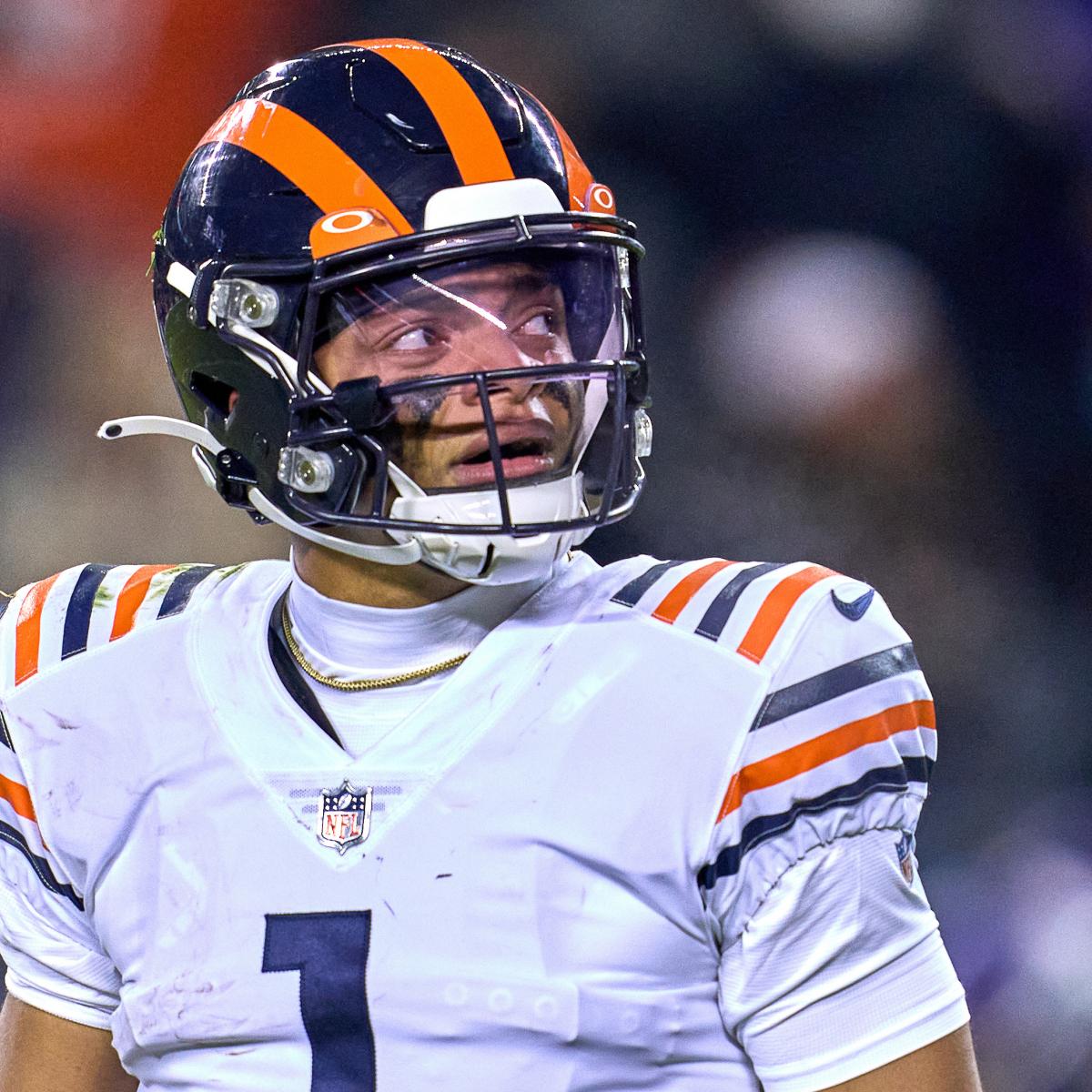 Patriots, Bears and Jaguars Let Their Young QBs Down in the 2022 NFL Draft

While most NFL teams made the best of the 2022 draft, a few upstart quarterbacks should have gripes about how the selection process played out last week.

Typically, clubs use premium picks to load up on pass-catchers and offensive linemen as investments in young signal-callers’ development.

This year, wide receivers have become a high-value commodity with big names such as Davante Adams, Tyreek Hill and A.J. Brown going to new teams and signing massive deals. As a result, general managers should’ve taken the cue to aggressively target the position in the first round for the benefit of the fifth-year options, or they should’ve acquired prospects who are ready to contribute before they command pay raises after three seasons.

Apparently, some front offices didn’t get the memo.

Three teams completely missed the mark in terms of upgrading their supporting casts around second-year quarterbacks. We’ll start with arguably the worst draft class across the league.

Teams scout independently to construct their big boards, but brain trusts should also have an idea of when other clubs may select a prospect to get maximum value in draft spots.

The New England Patriots didn’t seem to read the draft room well. They targeted the right positions to help quarterback Mac Jones but probably reached for prospects who might’ve been available a round or two later.

ESPN’s Mel Kiper Jr. ranked all 32 draft classes, and, no surprise, he slotted the Patriots last:

“I just don’t think they got value with their first two picks this year. Cole Strange (29) is a nice guard, but I didn’t see a first-round pick on tape. He likely would have been on the board when the Pats picked in the middle of Round 2.

“In Round 2, there were several better wide receivers available when New England took Tyquan Thornton (50), who didn’t even make my list of the top 25 wideouts in this class. Yes, he has blazing speed — he ran a 4.28-second 40 at the combine — but he needs a lot of work on his all-around game. Alec Pierce, George Pickens, Skyy Moore and Jalen Tolbert all would have been better picks. It’s another selection without value.”

Regardless, the Patriots should’ve considered North Dakota State’s Christian Watson on Day 1. He checked two boxes for New England: speed and big-play ability. The 6’5″, 208-pounder averaged 20.4 yards per reception as a collegian and ran a 4.36-second 40-yard dash at the NFL Scouting Combine.

As Kiper pointed out, the Patriots left better receivers on the board when they selected Thornton, a thin-framed 6’2″, 182-pounder. He may struggle to get off the line of scrimmage against press coverage, which would limit his ability to contribute right away. Bleacher Report NFL scout Nate Tice rated him as a fourth-round pick.

The Patriots made two questionable fourth-round selections as well.

They picked up running back Pierre Strong Jr., who may not touch the field in the upcoming campaign because he’s behind Damien Harris, Rhamondre Stevenson and James White.

Last year, Harris and Stevenson handled the majority of the load in the running game. White suited up for only three contests, but he had been the team’s primary pass-catcher out of the backfield since 2015. Unless New England cuts one of the three tailbacks, Strong projects as a stash player rather than an immediate contributor.

New England also picked a developmental quarterback in Bailey Zappe, who won’t do anything for Jones on the field. For now, the Western Kentucky product will slot behind Brian Hoyer and Jarrett Stidham on the depth chart.

The Chicago Bears made solid picks on Day 2 for their defense, but they passed on playmakers at wide receiver and a tackle (Nicholas Petit-Frere or Bernhard Raimann) who could’ve strengthened quarterback Justin Fields’ pass protection.

With a pair of second-round selections, the Bears picked cornerback Kyler Gordon and safety Jaquan Brisker. Both should start in Week 1.

As mentioned, wide receivers have become premium players. The Bears overlooked two 6’3″ wideouts who recorded sub-4.5 40 times at the combine in George Pickens and Alec Pierce for a safety, one of the least-valued positions based on contracts and franchise-tag numbers.

General manager Ryan Poles made another misstep when he selected wide receiver Velus Jones Jr. in the third round. Bleacher Report scout Derrik Klassen saw the Tennessee product as an instant-impact special teamer who needs a lot of work before he can contribute at wide receiver:

“Jones is not a complete receiver right now. His route tree was largely limited to go balls, screens and slants. In the rare instances he was asked to run other routes, Jones lacked the technique or sharp movement skills to get in and out of breaks comfortably. Furthermore, Jones’ hands are a concern. He struggles to catch balls outside of his frame or when contested in traffic, and he even shows some discomfort finding the ball in clean scenarios from time to time. It will likely take a couple of years for Jones to iron out either of these issues.”

In 2022, Velus’ speed may help the Bears on kick and punt returns more so than in the passing game, which is a disaster with the makeup of the wide receiver room.

Darnell Mooney and Byron Pringle sit atop the depth chart. The former has developed into a reliable playmaker with 142 receptions for 1,686 yards and eight touchdowns in two seasons, but the latter hasn’t recorded more than 42 catches or 568 yards in any of his three seasons.

Moreover, Pringle was arrested April 23 on charges of reckless driving and driving with a suspended license, per ESPN’s Courtney Cronin.

Chicago made 11 picks but used only one on a wide receiver and waited until the fifth round to select an offensive lineman. Keep in mind that Teven Jenkins missed most of his rookie campaign in 2021 because of back surgery. Fellow second-year tackle Larry Borom allowed five sacks and committed four penalties in 633 snaps last year, per Pro Football Focus.

The Bears failed to add high-end talent around Fields through free agency, and they didn’t do much better in the draft. Chicago may need one or more undrafted free-agent wide receiver to emerge in training camp.

The Jacksonville Jaguars made only one draft mistake, but that miscue could put quarterback Trevor Lawrence in precarious spots this year.

The Jaguars loaded up on pass-catchers in free agency, signing wideouts Christian Kirk and Zay Jones along with tight end Evan Engram. With wide receivers Marvin Jones Jr. and Laviska Shenault Jr. also in the fold, Lawrence has a plethora of targets.

But he may be under a lot of duress in the pocket.

Secondly, the Jaguars signed Cam Robinson to a three-year extension, which was a questionable decision because of his struggles at left tackle. SI.com’s John Shipley provided a snapshot of his performances over the past three seasons:

With Robinson’s past inconsistencies, Taylor’s shaky performances and Little’s rocky start, general manager Trent Baalke should’ve made a premium investment in pass protection instead of taking a big swing for Travon Walker, a high-upside defender but a one-year rotational starting lineman out of Georgia.

Alabama’s Evan Neal has less bust potential than Walker. With his experience on both sides of the line, he could’ve started at right tackle over Taylor in 2022 and moved to left tackle if Robinson trended in the wrong direction again. Baalke possibly blew the No. 1 overall pick and a chance to provide high-quality protection for his biggest investment.

Denial of responsibility! NewsUpdate is an automatic aggregator around the global media. All the content are available free on Internet. We have just arranged it in one platform for educational purpose only. In each content, the hyperlink to the primary source is specified. All trademarks belong to their rightful owners, all materials to their authors. If you are the owner of the content and do not want us to publish your materials on our website, please contact us by email – [email protected]. The content will be deleted within 24 hours.
Bearsbest sports newsDraftJaguarsnews update sportsnewsupdateNFLPatriots

Hey Lois, remember that time we were a nondescript Apple Arcade kart racer?