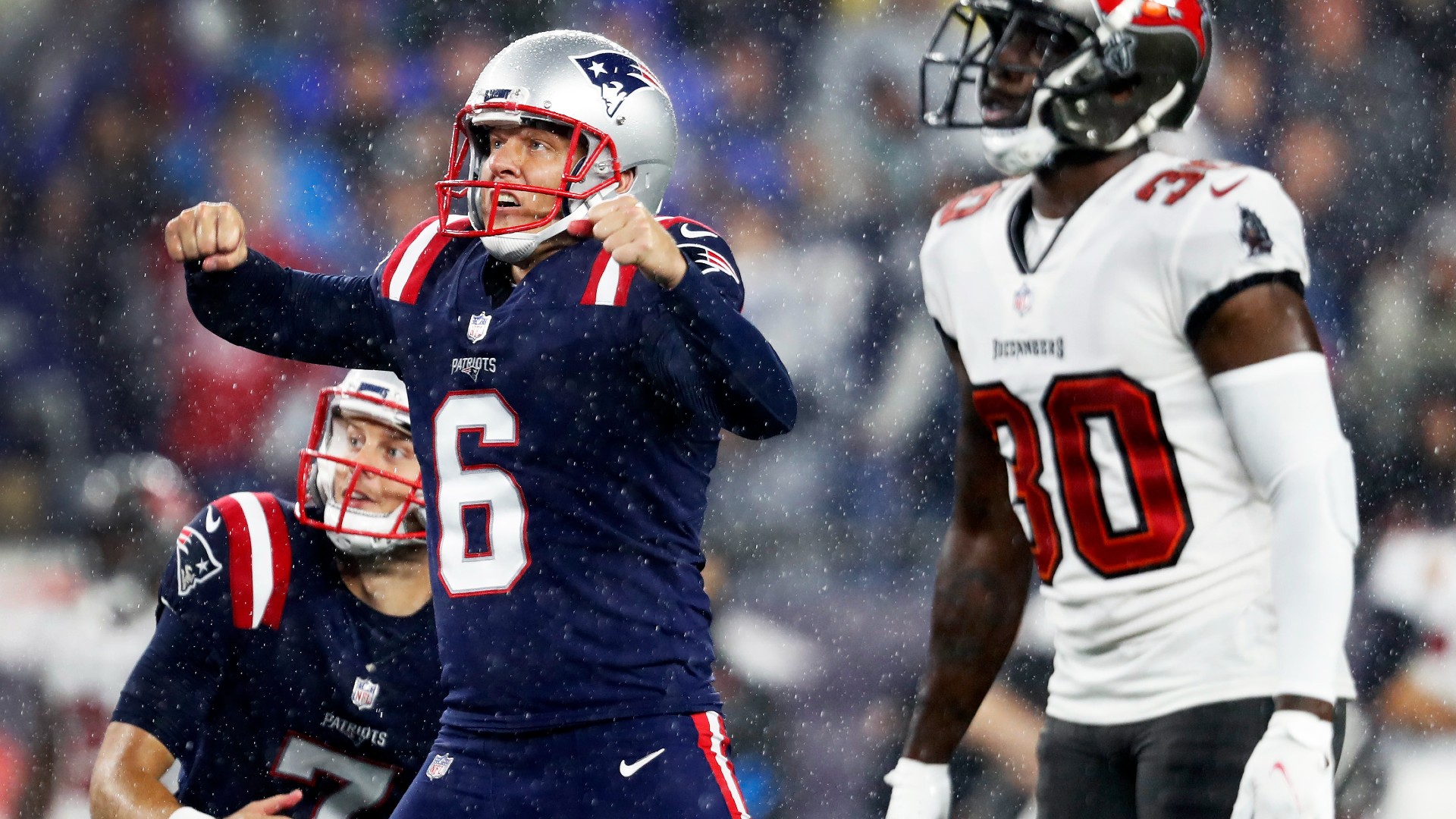 Bill Belichick was treating rookie quarterback Mac Jones like he was Tom Brady for most of the night. So why didn’t Belichick trust Jones to pull off a Brady-like comeback victory against Brady’s Buccaneers on Sunday night?

Instead of a walk-off win reminscent of Belichick’s defensive-coordinated Giants majorly upsetting the Bills in Super Bowl 25, kicker Nick Folk missed a 56-yard field-goal attempt when the ball bounced off the left upright.

Although it wasn’t a real sequel to “wide right,” Patriots fans will be wondering “what if” Belichick had instead left Jones and the offense in the game to try to convert a fourth-and-3 at the Tampa Bay 37 with 59 seconds left.

The two biggest factors working against Belichick’s decision to kick was the pouring rain at Gillette Stadium and Folk coming into the game dealing with a plant-leg injury to his left knee. But before getting into the deeper analytics, there were two other reasons not to kick.

First, Jones had been completing short high-percentage passes for most of the night against a depleted Buccaneers pass defense. Second, a little under a minute is an eternity to give Brady the ball back needing only another field goal.

The fact that Folk was so close to making it is irrelevant, because it was the lower-percentage path to victory vs. letting Jones trying to convert with a chance to move the Patriots a lot closer toward the end zone while ticking down the final seconds.

According to NFL NextGen Stats, the chances of Folk making that 56-yard attempt were only 45 percent, while the chances of the Patriots converting with Jones were 52 percent. Furthermore, the Patriots’ win probability was 34.7 percent by going for it vs. 24.3 percent by settling for the long-shot field goal.

In true Belichick fashion, the coach said “I mean, not really” when asked by reporters postgame whether leaving the offense on the field for fourth down was ever considered.

Belichick is known for not being a big analytics guy. Given he has six Super Bowl rings, however, it’s hard to second-guess much of what he does because of how well he knows his team will or won’t execute in certain situations.

MORE: Did Brady and Belichick hug after the game?

But he also has tended to be aggressive in similar scenarios in the past. The most notable of those was at the end of a November 2009 game against the Colts, when the Patriots went for a fourth-and-2 at their own 28 trying to protect a 34-28 lead against a prime Peyton Manning. When the Patriots didn’t convert, Manning took easy advantage of the short-field gift to win the game.

So why did Belichick get conservative when the stastical and philosophical evidence was weighed against him?

As well as Jones played, Belichick might have considered that the pressure of a last-gasp fourth-down play might get to him, especially when the Patriots also didn’t have an option for a run play given how much the Buccaneers had shut down that part of their offense (minus-1 yard). On the flip side, Belichick trusts his veterans to “do their job” and he was confident the red-hot, big-legged Folk would come through even in those conditions.

MORE: Garoppolo leaves with injury; Lance takes over for 49ers

Where the reasoning falls apart a little is the Brady part. If Belichick had that much respect for Manning, a QB he foiled many times with his defense, you would think he, of all coaches, would know not to give the ball back to Brady with any kind of a chance (see Aaron Rodgers last Sunday night vs. the 49ers).

Perhaps there was part of Belichick that envisioned Folk making it and his Patriots’ pass defense intercepting or thwarting Brady with the game on the line, feeding more into his legendary defensive genius in his only revenge game against Brady.

Whatever was in Belichick’s head under that hoodie, the process didn’t get the results. He may not regret his decision, but it’s one Patriots fans might not forget, because it didn’t give their team the best chance to beat Brady in his one and only homecoming.

Denial of responsibility! NewsUpdate is an automatic aggregator around the global media. All the content are available free on Internet. We have just arranged it in one platform for educational purpose only. In each content, the hyperlink to the primary source is specified. All trademarks belong to their rightful owners, all materials to their authors. If you are the owner of the content and do not want us to publish your materials on our website, please contact us by email – [email protected]. The content will be deleted within 24 hours.
56yardbadlyBelichickbest sports newsbillBuccaneersDecisionfield