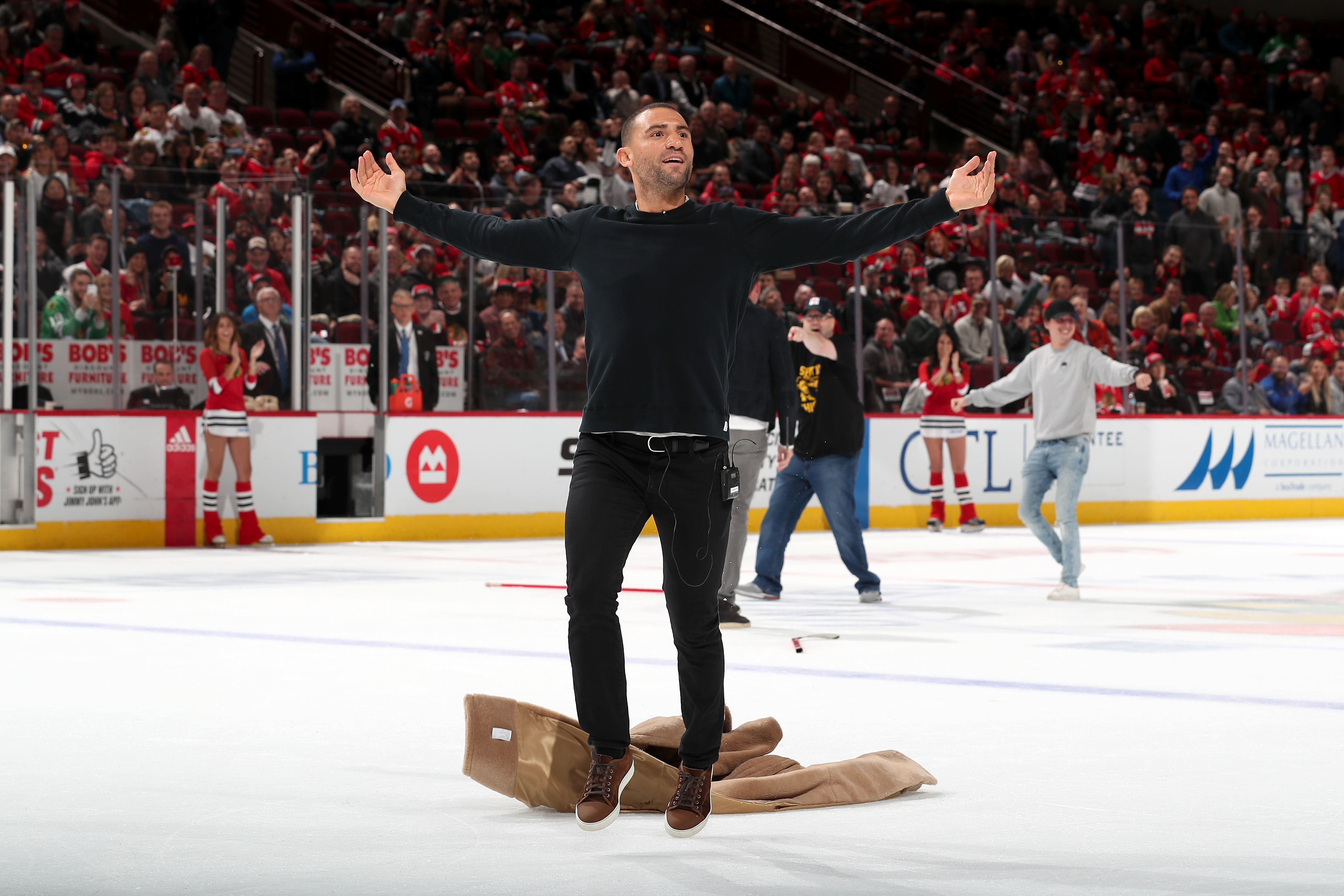 Bissonnette will move to the broadcast booth this year after six seasons in the NHL as a player. He discussed his upcoming move and memorable moments in his playing career with fans during the Q&A.

The following is the full transcript from the session.

@BR_OpenIce What are you most excited about bringing to the TNT broadcast panel?

The advice I keep getting, especially from Wayne, is just be yourself. Turner tells us they want us to be ourselves. That was really refreshing. I’m excited to just get in there and let it fly with the guys. Whether it’s diving into a serious topic or breaking a video down, it’s just gonna be a very good time and a lighthearted feeling to the broadcast. Just having fun and just bringing my silly, goof personality.

@Jibble How do you feel about the Coyotes making the switch back to the Kachina uniforms? As players, do you guys really care when a team decides to release a new uniform or change their current ones?

I personally did. I know the guys loved when they brought back the Kachinas. I would put Kachinas in the top 5 in the league. The younger guys these days love the new swagger, so I’m sure these guys are really excited about getting the new jerseys. Even last year, when they did the reverse retros. I would say Colorado with the Nordiques logo and the newer colors definitely hit a HR with the fans.

@NotMitchTrubisky Who was your biggest inspiration as a player?

As soon as I got to Arizona, Shane Doan almost became my second dad. He wasn’t overly judgemental but he took me under his wing. For a superstar, or a star in my eyes, to help me on and off the ice, despite all of his responsibilities, was huge. He was such a big component to me growing as a person and a player. It was recently his birthday, so Happy Birthday. I’m sure his wife was happy when he retired so he could spend time with his family, but I know he had such an effect on myself and many others.

@JTforMVP0 Did you have any pregame rituals?

I wasn’t overly superstitious. I had to do the music in the Yotes locker room. Some guys like country, then there are Europeans who like techno. Everybody liked different music, so I was trying to time things so that everybody was able to hear what they liked. My only superstition was keeping everyone happy and light.

@Foxhole23 Favorite moment of your career?

I didn’t score many goals in my career. My mother was sick for a few years and was never able to see me play. Finally, she wasn’t sick anymore and the game was close enough in Buffalo. Coach gave me the heads up that I wasn’t playing in Toronto, but that I would play in Buffalo. I had a family friend who had season tickets to Buffalo, put my grandparents on the glass and my parents had seats not too far in the lower bowl. I ended up scoring the game-winner. I was able to go up to my grandparents on the glass and kind of give them the knuckles. It just so happens the first game my mother and my grandparents were able to see me play live for the first time, I was able to score the game-winner in Buffalo. That one hit home. I get emotional telling that one sometimes.

@SantaClaude28 What’s the greatest team prank you’ve been a witness to?

The best pranks were back in the day even before I was involved. One of the guys took this powder they use that when you steal money the ink turns your hands purple. He put it in all the guys’ gear and he even put it in his own. When the guys went out for practice, everyone starts noticing they look like Barney the dinosaur with purple hands. The trainer had to get everyone all new equipment because he overdid it on the powder. Everybody’s hands were purple for like 5 days. Another time, someone put everyone’s house keys in the middle of the room and no one could tell whose keys belonged to who. One last one, Brad May had gotten a brand new BMW and someone took his keys and filled it to the brim with popcorn. His whole car smelled like popcorn and he had to go get it detailed. Nothing compares to the old stories.

@BJBawkowy Best and worst arenas you’ve had a chance to play in?

The worst rink as far as the amenities was in Long Island, The Coliseum. The crowd wasn’t as popular as it is now because the teams weren’t very good in that era.

It’s kind of in the middle of nowhere. There’s nothing really around the rink, so just a bummer to go to. Then, when you got into the locker room it wasn’t very pretty.

@Nahttodaydeath Could you take Whit in a fight?

Ya. Whit isn’t a scrapper. I could definitely take him, but I’ve never seen his wires crossed truly.

@46Mac Is there a specific guy who handed your ass to you in a fight?

Ryan Reaves. Hopefully he plays in the opener. I got put out against Reaves and I asked him and he told me ‘Hitchcock said no.’ I tried to grab him, I missed my reach and he gave me a couple punches then slammed me to the ice. After that, he was doing the championship belt celebration and I was so bitter in the box.

@Wrage What was your go-to line to chirp to another opponent? Conversely, what’s the best chirp that was ever delivered to you?

I was not a great chirper. It was more organic. The most proud I was, I think it was Sergei Gonchar. He whiffed on a breakaway and as he went by I said ‘hey, maybe you’re a lefty’ as I handed out my stick. He was an elite player so he probably was like ‘who the hell is this guy.’ On my end, people would usually roast my playing time saying I’m usually ‘a plug.’ Once someone asked if it was my first shift of the game when I was out there, and even the ref started laughing at that.

@MikeSteveRitter What’s the craziest gambling story from your playing days?

The craziest one I heard was a guy going to the casino the night before the playoff game and losing half a million dollars while downing a bottle of Johnny Walker Blue. Safe to say, he didn’t look like himself out there the next game and they didn’t win.

@Just_In_Time You have to bet your life savings on Charles Barkley or Shaq to beat Vasilevskiy on a breakaway. Who are you taking and why?

I have a hard time putting my money on Chuck. I hope he doesn’t hear this. I would have to go with Shaq. I don’t want to base it off his golf swing, but I’ve seen him play other sports and I just have to go with Shaq. I think I could stop Chuck on a breakaway in goalie gear.  Maybe we could get him in studio, and I could get the pads on. His knees don’t look the same so if we’re doing it on skates I don’t know if he could make it down to the goal line.

If you’re a home team, probably Anaheim. And it’s annoying. It has that tug-boat feel.

There is a place called Cafe Monarch and I think it’s one of the best restaurants I’ve ever been to. It’s a hidden gem. I’ve lived here since 2009.

Ovi is a bear. I couldn’t see any planet where Marchand beats Ovi in a fight. You saw when Svech bit off more than he could chew. I don’t even know if I would fight him. He weighs 240 and is built like a beast.

@NotMookieBetts Favorite teammate you played with?

Keith Yandle, easily the most entertaining guy. Especially for a guy who had to log minutes. He was always messing around. He was also one of the most superstitious people I’ve ever seen. He had a certain way of stretching his socks out. He had special way of stepping on the mats. It was a nuts-o scene.

@foxhole23 Who wins the cup this year?

Colorado and Florida in the Final. It would be good for the league. I like new markets.

Denial of responsibility! NewsUpdate is an automatic aggregator around the global media. All the content are available free on Internet. We have just arranged it in one platform for educational purpose only. In each content, the hyperlink to the primary source is specified. All trademarks belong to their rightful owners, all materials to their authors. If you are the owner of the content and do not want us to publish your materials on our website, please contact us by email – [email protected]. The content will be deleted within 24 hours.
AMAbest sports newsBissonnetteBroadcastlockernews update sportsnewsupdateNHL

At Wellesley, the students offer screams, but no smooches, as the marathon returns.

3 NFL teams who were unlucky so far in 2021 season