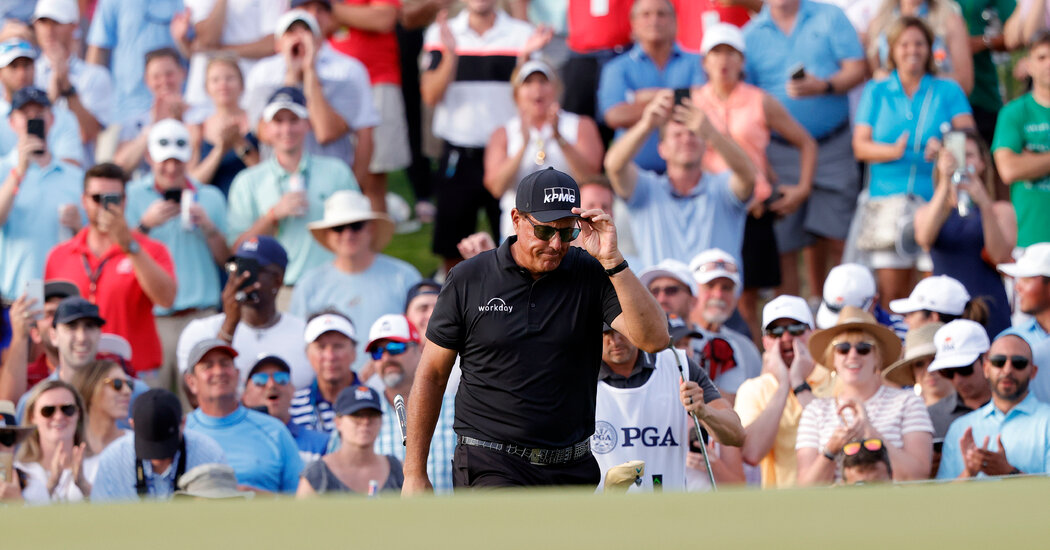 KIAWAH ISLAND, S.C. — Mindful of keeping his focus as he ages, Phil Mickelson has begun meditating in his spare time. In the third round of the P.G.A. Championship on Saturday, he clearly took his new diversion to the workplace, pausing for long contemplative moments, occasionally with eyes closed, as he prepared to execute a shot.

For 11 holes on Saturday, the result was a commanding, five-shot lead.

But Mickelson’s composed walk around the treacherous Ocean Course at Kiawah Island would turn into roughly an hour of chaos, when it seemed he was on the verge of playing his way out of the tournament.

Mickelson found the inner peace — or relied on nearly 30 years of top performances — to right the ship in the nick of time, rallying with five closing pars to take a one-stroke lead over Brooks Koepka into Sunday’s final round. Koepka had briefly tied Mickelson atop the leaderboard but bogeyed the 18th hole as Mickelson was calmly closing out his day.

If Mickelson, who turns 51 next month, maintains that advantage in the final round, he will become the oldest golfer to win a major championship, taking the record from Julius Boros, who was 48 when he won the 1968 P.G.A. Championship. A win on Sunday would be Mickelson’s sixth major victory, something only 13 other men’s golfers have achieved.

“Tomorrow, I just want to stay calm enough and focused enough and visualize each shot, and if I can do that I can have the performance I want,” Mickelson said after shooting a two-under-par 70 that left him seven-under par for the championship. “It’s a great opportunity.”

Mickelson blamed a loss of concentration for his missteps on the 12th and 13th holes on Saturday, which cost him three strokes and nearly derailed his round.

“I slipped on a couple shots, but I’ve seen a lot of progress mentally,” he said. “That’s all significantly better. You know, just to have a chance tomorrow is the goal.”

Mickelson will be paired with Koepka on Sunday, while Louis Oosthuizen, who is alone in third at five under, and Kevin Streelman, at four under, will be the second-to-last group off the first tee.

On Saturday, Mickelson repeatedly stood motionless and pensive behind his golf ball. When he finally set up for his next shot, he would often have a thin, relaxed smile on his face.

For a little more than the first half of his round, the absorbed deliberation led to spectacular outcomes as Mickelson birdied five holes to take a five-stroke lead on the field with eight holes to play.

Nothing in Mickelson’s recent performances would have foreshadowed such a successful assault this week on the devilish Ocean Course. Since missing the cut at last year’s United States Open, his best result has been a tie for 21st. He has finished outside the top 50 in other events nine times.

Mickelson’s mini-collapse on Saturday, which included knocking a tee shot under a golf cart perched on a sand dune, began on the par-4 12th hole, where he hit his tee shot into a bunker and had to chip out sideways because of an awkward lie. After his next shot landed 26 feet from the hole, he had to settle for a two-putt bogey.

That lapse, after a string of pars and birdies — and after subpar rounds of 70 and 69 in the first half of the tournament — appeared to unnerve Mickelson, despite his new relaxation techniques.

On the 13th tee, after Mickelson’s playing partner Oosthuizen smacked his ball into a swampy water hazard right of the hole, Mickelson did the same. Worse for Mickelson, he deemed that his tee shot had traveled entirely over the hazard and therefore he had to re-tee with a penalty stroke. While his next shot bounced safely in the fairway, it counted as his third shot and led to a double-bogey six — the first six Mickelson had recorded on any hole at the event.

Mickelson rallied with two pars, which offered a return to normalcy that he had needed. But then he severely hooked his tee shot at the par-5 16th and watched helplessly as it bounded into the course’s thick native grasses. The ball came to rest beside the front tire of a golf cart parked atop a sandy mound.

The cart was moved, and Mickelson punched out, and he then found the green with his third shot. His 12-foot birdie putt was struck too firmly, though, and while it hit the hole, it was traveling so fast that it hopped over the cup and lipped out.

Minutes earlier, on the 16th green, Koepka had rolled in a birdie putt that pulled him into a tie for the lead at seven under. His stay alongside Mickelson in first was brief, however; Koepka missed a 6-foot par putt on the 18th hole as his rival parred in.

“It felt like the worst putting performance I’ve ever had,” said Koepka, who has won four major championships, and two P.G.A. Championships, since 2017. “The only way to look at it is that it can’t get any worse.”

While Koepka was on his way to a bogey at 18, Mickelson, on the par-3 17th hole, the most intimidating spot on the course, drilled an impressive iron from the tee to within 17 feet of the cup. He settled for par when his birdie putt trickled just left of the hole, but on the final hole of the day, despite missing the green to the left, he nearly chipped in from 65 feet. His 5-foot par rolled around the edge of the cup but dropped in for his final par.

Mickelson opened Saturday’s round by slicing his first tee shot into rough so thick his caddie, and brother, Tim could not find the ball even when standing only eight feet away. Nearby fans pointed it out. When Phil Mickelson later arrived on the scene and gazed down at his ball, he chuckled.

But after a long pause with his eyes closed as he visualized the shot to come, he successfully wedged the ball onto the green and made a steadying par. Mickelson then birdied the par-5 second hole as well as the par-4 third, where his tee shot came to rest 2 feet from the hole. He added birdies on the sixth hole, where he made a 16-foot putt, and the seventh, where he rolled in his ball from 5 feet.

A precise wedge from 118 yards on the 10th hole left Mickelson a 6-foot putt. He was already walking to collect it before it disappeared into the hole moments later, to the delight of the roaring gallery.

Denial of responsibility! NewsUpdate is an automatic aggregator around the global media. All the content are available free on Internet. We have just arranged it in one platform for educational purpose only. In each content, the hyperlink to the primary source is specified. All trademarks belong to their rightful owners, all materials to their authors. If you are the owner of the content and do not want us to publish your materials on our website, please contact us by email – [email protected]. The content will be deleted within 24 hours.
best sports newsDayMickelsonsnews update sportsnewsupdatenumbersPGAPhil