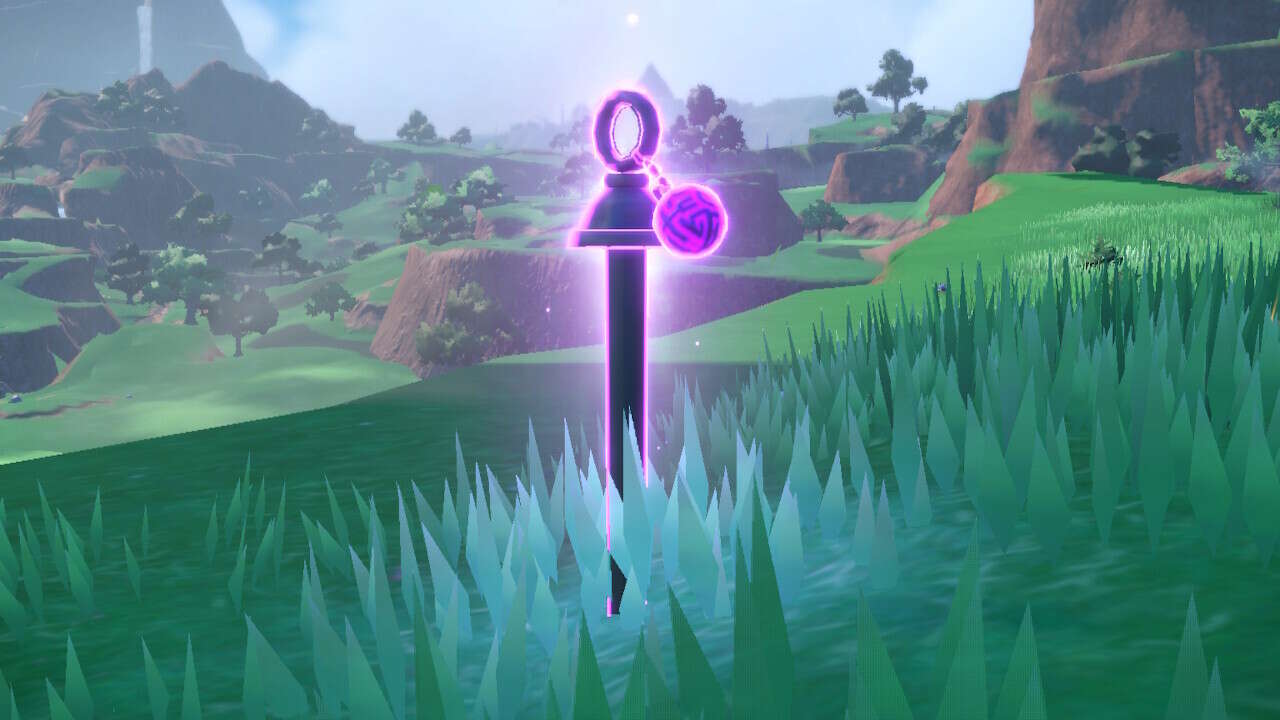 Pokemon Scarlet And Violet – All Stake And Shrine Locations

Pokemon Scarlet and Violet features the first fully connected open-world in the series, filled with secrets for players to find. One of those secrets are the four shrines found in the Paldea region, each of which contains a legendary Pokemon. In order to access each shrine, you will need to find eight stakes in the surrounding area. Here is where you can find each shrine and its corresponding stakes. If you fully advance through the history courses and befriend the history teacher Ms. Raifort, she will mark the shrine locations on your map for you, although this isn’t necessary to unlock them. While you don’t need to finish the game to access these shrines, you will need to have unlocked all traversal abilities. If you accidentally knock out the legendary Pokemon, they just return to the shrine and you can try again after a short wait.

Located in the southeast corner of Paldea, the Grasswither Shrine is purple, which means you will need to locate the eight corresponding purple stakes and remove them from the ground. This shrine contains Wo-Chien, a Dark/Grass type legendary Pokemon that resembles a snail.

Stake number one can be found on the cliff directly above the shrine, which can be climbed up to use your mount.

The second stake can be found on the top of the mountain directly south of Los Platos, which can be reached by using your mount to climb.

The third stake is located to the northwest of Los Platos, on the cliff just above the Pokemon center.

The fourth stake is found in the central part of the South Providence area five. There is a large mountain here, with the highest point in this area. The stake can be found at the very top.

The fifth stake is located on the southern part of the water surrounding Mesagoza, on the east side.

Located in the center of South Providence area three, just east of Mesagoza, the sixth stake is located on top of a plateau in the area.

The seventh stake is located just south of Artazon, on a cliff overlooking the west Pokemon center in the town.

The final stake is located on the border between the desert part of South Providence and the grassy part of the East province on a ravine overlooking the desert. Once the final stake is grabbed, you will get a text prompt saying a noise can be heard coming from the shrine. Opening the shrine will bring out the legendary Pokemon, Wo-Chien.

The yellow Icerend Shrine can be found on the western edge of Paldea, near where the Open Sky Titan fight occurs. This shrine contains the legendary Pokemon Chien-Pao, a Dark/Ice type that resembles a sabertooth tiger.

The first yellow stake can be found to the southwest of Cortondo, but it is located high up on the cliffside. It is closer to the elevation of Alfornada, which is located further south of the stake.

The second yellow stake can be found to the east of Alfornada, at the top of a waterfall.

The third stake looks like it is near the first yellow stake, but it is actually in an underground tunnel. Enter the tunnel from the beach on the western coast (where the flag is in the image) and head into the tunnel.

The fourth yellow stake is located to the northwest of Cortondo, to the south of the West Province (area one) Pokemon Center. It is located on top of a cliff.

The fifth yellow stake is located to the southeast of the Icerend Shrine, near the windmills. There is a small plateau in a canyon in this area.

The sixth yellow stake is located just south of the Team Star’s Dark Crew headquarters, overlooking some ruins on top of a cliff.

The seventh stake is located just to the east of the sixth yellow stake, located at the bottom of a cliff.

The final stake is located in Cascarrafa, directly behind the gym building. Behind the building is a small pond connected by a river with some trees, the stake is tucked behind one of the trees. After pulling the final stake, a message will pop up indicating that the shrine is now unlocked. Opening the shrine will bring out the Dark/Ice legendary Pokemon Chien-Pao.

The green Groundblight Shrine is located in the northwestern part of Paldea, located in the marshlands north of the Casseroya Lake. This shrine contains Ting-Lu, the Dark/Ground legendary Pokemon that resembles a moose/deer.

The first green stake can be found on a grass plateau just north of the Asado Desert. From the plateau, there is a hole in the center of the plateau, which you can jump down and land on a stone pillar, where the stake is located.

From the second stake, head north and you can find it on the southern side of the river.

The third stake is located to the northeast of Medail, where the river meets the snowy region. Head up the waterfall and you can find the stake on the cliffside.

Located in the southern part of the middle of Casseroya Lake, there are two small islands next to each other. On the smaller island you can find the fourth stake.

The fifth stake can be found on the large island in the middle of Casseroya Lake, on the eastern side of the island.

The sixth stake can be found on the shoreline of Casseroya Lake in the southwestern corner.

The seventh stake can be found on the northwestern corner of this area, near the ocean. The stake is on a hill overlooking a set of ruins.

The final stake can be found to the east of the Groundblight Shrine, on the snowy cliffside bordering the marsh area. Upon removing the final stake, a text pop-up will appear, informing you the shrine is open, where you can battle Ting-Lu, the Dark/Ground legendary Pokemon.

The first blue stake can be found directly outside of where the blue shrine is. Instead of following the water into the cave where the shrine is, head outside and go to the cliff directly above the cave entrance.

The second stake can be found on the northern tip of Paldea, where the river running through the snowy region meets the beach. There is a tree on the western part of the area and the stake is next to it.

The third blue stake can be found in the northeastern part of the map, near the edge of the snowy region. There is a tall plateau here, with the stake located on top of that plateau.

The fourth stake is located further east, near the inaccessible part of the map. The stake is on a cliff, just above the North Province (area two) Pokemon Center.

Next, head southeast from the blue shrine, to another area bordering the inaccessible part of the map on the eastern edge. This stake is located just north of the river in this area. There is a set of ruins at the bottom of a cliff, which is where the stake is located.

The seventh stake is located in the northern part of Tagtree Thicket, where you fight the Team Star Poison Crew. In the northern area there is a small pond and further north of that is a large cliff, with the stake at the top, next to a tree.

The final stake is located in a small grassy patch at the southern end of the snowy region, to the northeast of the Dalizapa Passage Pokemon center. It’s also located just north of the Team Star Poison Crew base. Pulling the final stake will trigger a textbox, indicating that the shrine is unlocked and you can battle Chi-Yu.

Denial of responsibility! NewsUpdate is an automatic aggregator around the global media. All the content are available free on Internet. We have just arranged it in one platform for educational purpose only. In each content, the hyperlink to the primary source is specified. All trademarks belong to their rightful owners, all materials to their authors. If you are the owner of the content and do not want us to publish your materials on our website, please contact us by email – [email protected]. The content will be deleted within 24 hours.
best games newsgame updategames newsLocationsnews update gamesnewsupdatePokemonScarlet

Significant progress made by IOA, decision on final warning…

Uber rolls out robotaxis even as self-driving car hype wanes