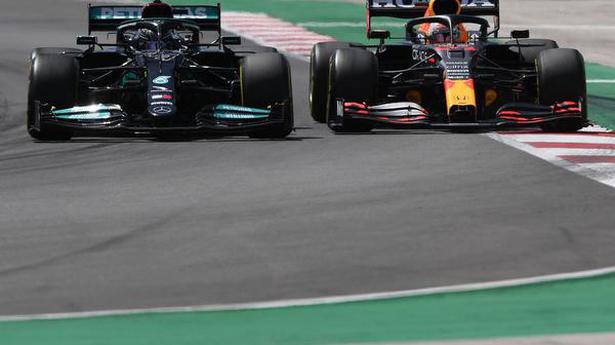 Verstappen finished second at the Algarve circuit with Mercedes’ Valtteri Bottas completing the podium, and taking a bonus point for the fastest lap, after starting from pole position. Verstappen’s Mexican teammate Sergio Perez was fourth.

The victory was a record-extending 97th of Hamilton’s career, second of the year and repeated his win at the same circuit last season.

“That was such a tough race, physically and mentally, just keeping everything together. It was very windy out there so it was very easy to put a foot wrong,” said Hamilton, who started on the front row with Bottas.

“I just didn’t quite get as good a start as Valtteri and then lost out on the re-start, which was not good. I was not happy about that.”

The safety car was deployed on lap two after the Alfa Romeos of Kimi Raikkonen and Antonio Giovinazzi made contact, with debris left on the track and the field streaming through the pitlane.

When racing resumed, Verstappen pounced to pass Hamilton for second place but the Briton seized back the position five laps later.

He then swept past Bottas on track on lap 20 of 66 and took the chequered flag 29.148 seconds clear of Verstappen after the Dutch driver pitted in a bid for fastest lap on fresh, soft tyres.

Denial of responsibility! NewsUpdate is an automatic aggregator around the global media. All the content are available free on Internet. We have just arranged it in one platform for educational purpose only. In each content, the hyperlink to the primary source is specified. All trademarks belong to their rightful owners, all materials to their authors. If you are the owner of the content and do not want us to publish your materials on our website, please contact us by email – [email protected]. The content will be deleted within 24 hours.
97thauto racingbest sports newsf1f1 latest newsf1 newsFormula OneHamilton

Pure golf on Kiawah Island, something everyone understands