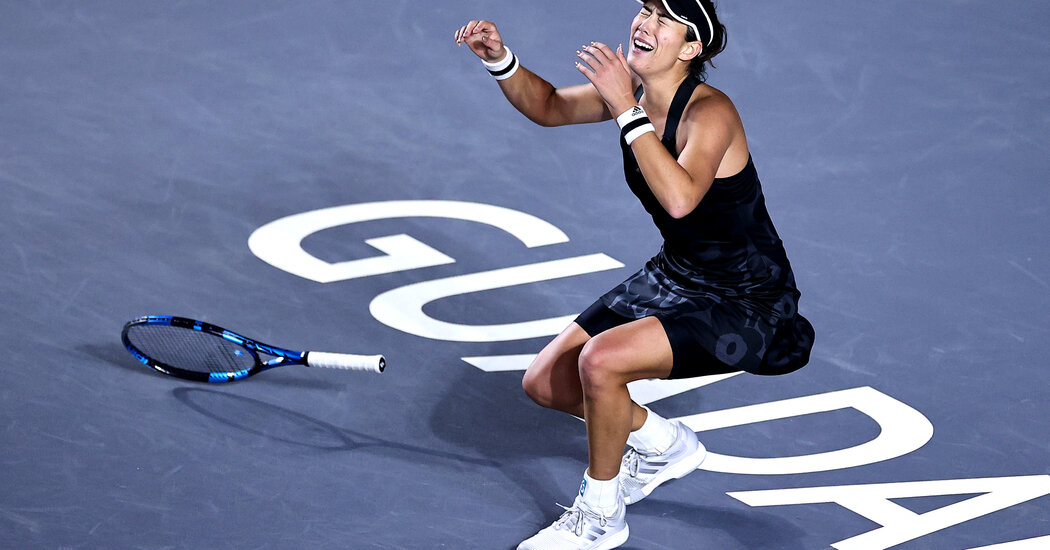 GUADALAJARA, Mexico — As her final shot forced one final error, and Garbiñe Muguruza beat Anett Kontaveit and slammed an exclamation point onto the tennis season by winning the WTA Finals, the veteran player claimed more than just an individual triumph.

This was not simply a win for a single player, but for power and aggression in women’s tennis and the unique form of mental toughness it requires.

Muguruza, who prevailed, 6-3, 7-5, in 99 minutes, had her opponent on her heels from the start, finding opportunities to break Kontaveit nearly every time she served in the first set, pushing forward and making Kontaveit backpedal far behind the baseline and scramble across the back of the court. Kontaveit, an Estonian, made a battle of it, forcing Muguruza to raise her level of play in the second set. But after an hour and a half, Kontaveit resembled a prize fighter whose arms were still swinging but whose wobbly legs could not sustain her any longer.

“A dream come true to play here,” said Muguruza, a Spaniard the Mexican fans adopted as one of their own during the tournament.

Trying to guess the next dominant player in women’s tennis long ago became an act of futility. The game produces surprise champions practically every week. But what unfolded a mile above sea level in the middle of Mexico in the past week provided plenty of hints about where the women’s game is going. Players hoping to make it at the elite level would do well to figure out how to hit the ball as hard as they can, and then try to hit it even a little bit harder, and not care much when inevitable misses occur.

“It doesn’t always go your way,” said Kontaveit, who survived an onslaught from Maria Sakkari of Greece in the semifinals and figured out the modern power game of the moment as few others have during her white-hot final month of the season. “You miss some shots. Be kind to yourself, and look forward to the next point.”

The WTA Finals is different from other tournaments, where top players can usually spend a few rounds getting a feel for the ball against inferior competition. The WTA Finals includes only the best eight available players of the season. Every match is a test the caliber of a Grand Slam quarterfinal, or something even tougher, making it clear what it takes to win at the highest level, night after night.

The tennis of the past eight days was not for the faint of heart. This was a collection of women blasting ball after ball after ball, mostly trying to pummel opponents into submission rather than outthink them.

The eight-player field in Mexico included two players — Iga Swiatek of Poland and Barbora Krejcikova of the Czech Republic — who approach the court with an old-style mix of finesse and artistry. Swiatek and Krejcikova went a combined 1-5 in round robin play and failed to advance to the semifinals. The last four was made up of players whose specialty is hitting untouchable balls through the back of the court at withering speed. When the ball is landing inside the lines, the strategy wins points and games and crushes an opponent’s spirit.

Muguruza, a two-time Grand Slam champion who is 28, has been doing this for a while, though this was her first time reaching the final in the year’s ultimate tournament.

A dozen years ago, after she had sprouted to six feet tall, she realized that following in the stylistic footsteps of the Spanish greats of the previous generation was not going to work for her. They were classic defenders, so-called dirt-ballers who honed their games on clay and fought tennis wars of attrition.

“I’m a tall woman, big arms, and my personality did not match the classic Spanish game,” Muguruza said Tuesday. “I wanted to dominate.”

She did plenty of that in Guadalajara, and it was fitting that to get to the finals, Muguruza had to first beat the next iteration of herself in Paula Badosa, a 23-year-old Spaniard who modeled her game after Muguruza’s. Like Muguruza, Badosa is six feet tall, and she saw in Muguruza another way to play.

“Other Spanish players play different,” Badosa said. “She was the only one who played super aggressive.”

It’s true that had Ashleigh Barty of Australia, the world’s top-ranked player, opted to play this championship, finesse might have played a larger role in the past week. Barty’s greatest weapon is a slice backhand, though she, too, hits plenty of forehands through the back of the court and is among the game’s leaders in service aces. But Barty ended her season in September after spending six consecutive months on the road because of Australia’s restrictive rules for international travelers.

And so, the 2021 WTA Finals unfolded mostly as a series of slugfests in which brute strength was as potent a weapon as a drop shot.

There was a three-set brawl between Aryna Sabalenka of Belarus and Sakkari, the tour’s reigning gym rat. After outlasting Sabalenka, Sakkari spoke of using her supreme strength and fitness as weapons.

“It makes a lot of players be kind of like intimidated because they know that I can last long,” Sakkari said.

Playing with relentless aggression, though, is a high-risk, high-reward game, a tightrope walk without a safety net that brings wild swings within a season, or even a match.

Kontaveit lost four straight matches and nearly all of her confidence during the summer when she could not make enough consistent and true contact with the ball. Then she got on a roll in the fall and won the final two tournaments to grab the final spot in this championship.

Sabalenka seized the momentum and a 3-1 lead in the final set Monday night against Sakkari. Then the nerves kicked in, and her balls couldn’t find the court. With a game that is all power all the time, Sabalenka was out of options and barking at herself like a dog in the night as Sakkari reeled off five straight games to win their nearly three-hour battle.

But 21 hours later, in the semifinal, those same crushing, crosscourt backhands from Sakkari kept floating long and wide or getting hammered right back across the net by Kontaveit. Sakkari then found her groove and got within three games of the finish line. But her blasts started hitting the net and flying long once more, and she could not find a way out of a rut that was both physical and mental.

“A missed opportunity,” she said through tears when it was over.

Muguruza muscled a backhand to earn her chance to win the first set, and oddly won it with a magical topspin lob, one of the few that anyone tried all week in Mexico. Soon, though, it was back to big hitting, serves darting for the corners and deep drives at the lines at the earliest opportunities. She fell behind late in the second set and needed one last burst of power to thrash through the final three games, collapsing on her back when Kontaveit’s final ball hit the middle of the net.

They remember details of points played a decade earlier and can recall an opponent’s catalog of tendencies in the heat of competition.

But they also have a knack for forgetting a lost point, game or set as soon as it’s gone. They play each point, each shot, on its own merits. Blast a forehand into the net. Fine. Here comes the next one, hit just as hard and with the strongest belief that it will find the back corner of the court.

That is what Muguruza was able to do in the crucial moment Wednesday night.

With the power game ascendant, it’s the likely path anyone who wants to compete for championships and make it to this elite finale will have to take in 2022.

Denial of responsibility! NewsUpdate is an automatic aggregator around the global media. All the content are available free on Internet. We have just arranged it in one platform for educational purpose only. In each content, the hyperlink to the primary source is specified. All trademarks belong to their rightful owners, all materials to their authors. If you are the owner of the content and do not want us to publish your materials on our website, please contact us by email – [email protected]. The content will be deleted within 24 hours.
best sports newsFinalsmuguruzanews update sportsnewsupdatePowerreignsports news