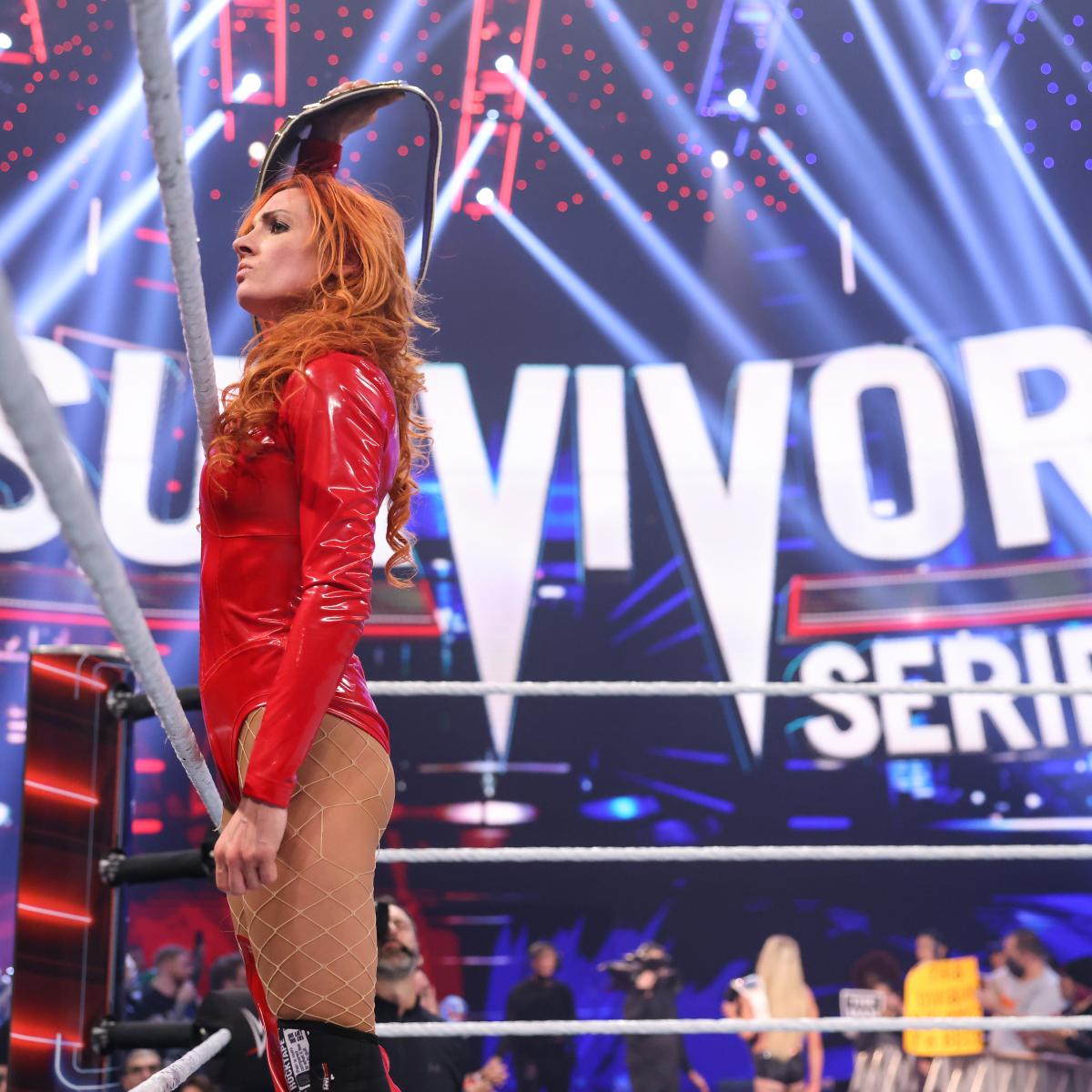 The Survivor Series pay-per-view was one mired by creative inconsistency, unfulfilled expectations and the overwhelming sense of status quo but, as is almost always the case with WWE extravaganzas, at least the wrestling was good.

The show produced a total of seven matches, five of which were quite good and showcased the depth of talent that exists within the company.

From intensely personal wars between champions to elimination tag matches in the tradition of the Survivor Series concept, the WWE Superstars shrugged off questionable booking and provided fans another solid entry into the 2021 catalog of spectaculars.

Which match was the night’s best, though?

Find out with this look at every one of the contests.

Battle royals are never any good and that sure as hell didn’t change Sunday night in Brooklyn.

There were punches and kicks galore and a few half-hearted attempts at storytelling. The result was a gigantic waste of time that was more Pizza Hut commercial, less professional wrestling than anything.

Omos looked great, presented like the dominant big man and future star that he is, but no one else did. Instead, the match was like every other battle royal ever: a mangled mess of bodies, depleting ever so often until there was only one.

An uninspired mess that managed to put over the one guy in the match that the company had already been pushing for the last six months.

Shinsuke Nakamura and Damian Priest deserved so much better than what they got out of this year’s Survivor Series. Thrown onto the card at the last minute to adhere to the brand warfare gimmick, the reigning Intercontinental and United States champions had no backstory to speak of and the crowd was hesitant to invest in anything they did as a result.

That the match was little more than a backdrop for the continued execution of Priest’s developing heel persona did not help matters.

Rather than a match that reflected the talents of both involved, The Artist and Archer of Infamy had a basic wrestling match that concluded with an enraged Priest breaking Rick Boogs’ guitar over his knee and blasting the IC champion with it.

A little bit of creative effort would have gone a long way and, possibly, provided the show with a sleeper hit. Instead, like the show as a whole, it merely left fans underwhelmed.

The actual action within the women’s traditional Survivor Series elimination tag match was perfectly acceptable. In fact, it was nice to see 10 women get the time to actually shine on a big pay-per-view stage. The problem with the match was its booking, which left a ton to be desired.

Toni Storm stepped up to challenge Charlotte Flair for the SmackDown women’s title the last two weeks but was the first member of the blue team eliminated. Not by megastar Bianca Belair, but by Raw’s own No. 1 contender, Liv Morgan, who was immediately sent packing herself.

Banks, the babyface on Team SmackDown, was presented as an unlikeable egotist to the point that by the time her team turned against her leading to her own elimination, it came across as totally justified.

If those weren’t strong enough issues, the fact that Belair overcame 4-1 odds and systematically picked off each of her opponents was.

We know: The EST is great. She has been nothing short of outstanding this year and has really developed into a star the likes of which WWE will be able to build around for years to come. But come on, the creative team really laid out a finish where she beat three competitors in a row, barely breaking a sweat to do it?

Sure, it strengthens her star but it devalues the entire opposing team in the process.

It was backward booking that left Raw with an undisputed main event attraction in their hands and SmackDown with a group of women who couldn’t overcome a single opponent.

RK-Bro vs. The Usos may not have been the show-stealer some predicted but it was still a damn fun tag team match that highlighted why the two teams are current champions on their respective brands.

Riddle is a unique character in that he can legitimately kick the ass of anyone sharing the ring with him but he’s a great seller and really knows how to put over the opponent’s offense, making him a great babyface-in-peril. That was on full display Sunday as he absorbed the punishment of his opponents before making the red-hot tag to Orton, who exploded into the ring in his 177th WWE pay-per-view match and unleashed hell on Jimmy and Jey.

The back stretch of the match featured the typical breakdown of action, with all four men becoming involved, but it was the closing seconds that really made this one memorable.

Jimmy coming off the top for the Uso splash, only to land directly in The Viper’s waiting arms for a jaw-dropping RKO was the exclamation point this one needed and elevated it from solid match to one of the better ones on the show.

That is entirely too many for any one match, no matter how much WWE was attempting to protect the talent within. If you don’t want Drew McIntyre or Bobby Lashley losing a fall, don’t book them in a match like this. Or, better yet, disqualify them so it at least looks cool.

At least Kevin Owens walking out on the red brand after feeling as though he had been betrayed by those closest to him made sense within the context of the story both he and the creative team are telling.

Beyond those poor choices, and the decision to treat King Woods like an also-ran, the men’s match had a bunch to like.

The action was strong, Jeff Hardy was presented as a world title contender after months of wandering aimlessly and waiting for WWE Creative to remember just who the hell he is, and Seth Rollins scored a big win as he continued to prepare for a WWE title match against Big E.

Anytime you get a collection of performers as strong as those involved in this match, they will almost always over-deliver in relation to the build or booking. That was absolutely the case, particularly late in the match when Rollins and Hardy were able to show out.

No one does heavyweight main events like WWE and, true to form, this was a great, physical battle between the top two guys in the company. Or, as Big E might put it, two meaty men slapping meat.

The WWE champion entered Barclay Center for the biggest match of his career, a showdown with Universal champion and biggest-star-in-the-company Roman Reigns, and did not disappoint.

Together, the competitors threw everything they had at one another before Reigns expertly targeted the previously injured knee of his opponent and put him away with one last spear.

Big E was protected to an extent, kicking out of Reigns’ spear once before succumbing to it later. If there was one issue with the match, like the majority of the event, it was the booking.

For 448 days, Reigns retained his title thanks to interference from The Usos. He repeatedly needed outside interference to ensure victory. Why, when you have an opponent still relatively early in his title reign who could use some booking to help prop him up in the audience’s eyes, would you beat him clean when you have every resource to really make it look like it took the world to knock him off?

That major flaw hangs over the match like a pregnant cloud, preventing it from taking over the top spot as the match of the night.

The best match of the entire show was the opener of the pay-per-view portion of the night; a grudge match between former friends turned bitter enemies in Raw’s Becky Lynch and SmackDown’s Charlotte Flair.

The atmosphere was electric as the fans in Brooklyn recognized the magnitude of the match, appreciating the star power of both women and the very real beef that existed between them. After all, both Big Time Becks and The Queen spent the entire week prior to telling media outlets about it.

With all of the talking over, the women’s champions proceeded to deliver a heated, physical fight that reflected the disdain that has consumed them. The strikes were stung a little more, the trash-talking was obvious and the physicality was off the charts.

There were wrestling moves, sure, but this felt like two women beating the hell out of each other in search of a win that not only would etch their names in the history books but, also, validate their claims to superiority.

In the end, it was Lynch who out-cheated Flair by grabbing the ropes during a rollup and scoring the victory, but who won and lost was not relevant. Expectations were high, anticipation was enhanced by the promo work of both women leading into the event and the final product was a Match of the Year candidate that blurred the line between fiction and reality.

Denial of responsibility! NewsUpdate is an automatic aggregator around the global media. All the content are available free on Internet. We have just arranged it in one platform for educational purpose only. In each content, the hyperlink to the primary source is specified. All trademarks belong to their rightful owners, all materials to their authors. If you are the owner of the content and do not want us to publish your materials on our website, please contact us by email – [email protected]. The content will be deleted within 24 hours.
best sports newscardmatchnews update sportsnewsupdatePowerRankingseries

Jake Paul Says Rumors of Rigged Contracts for His Fights Are…