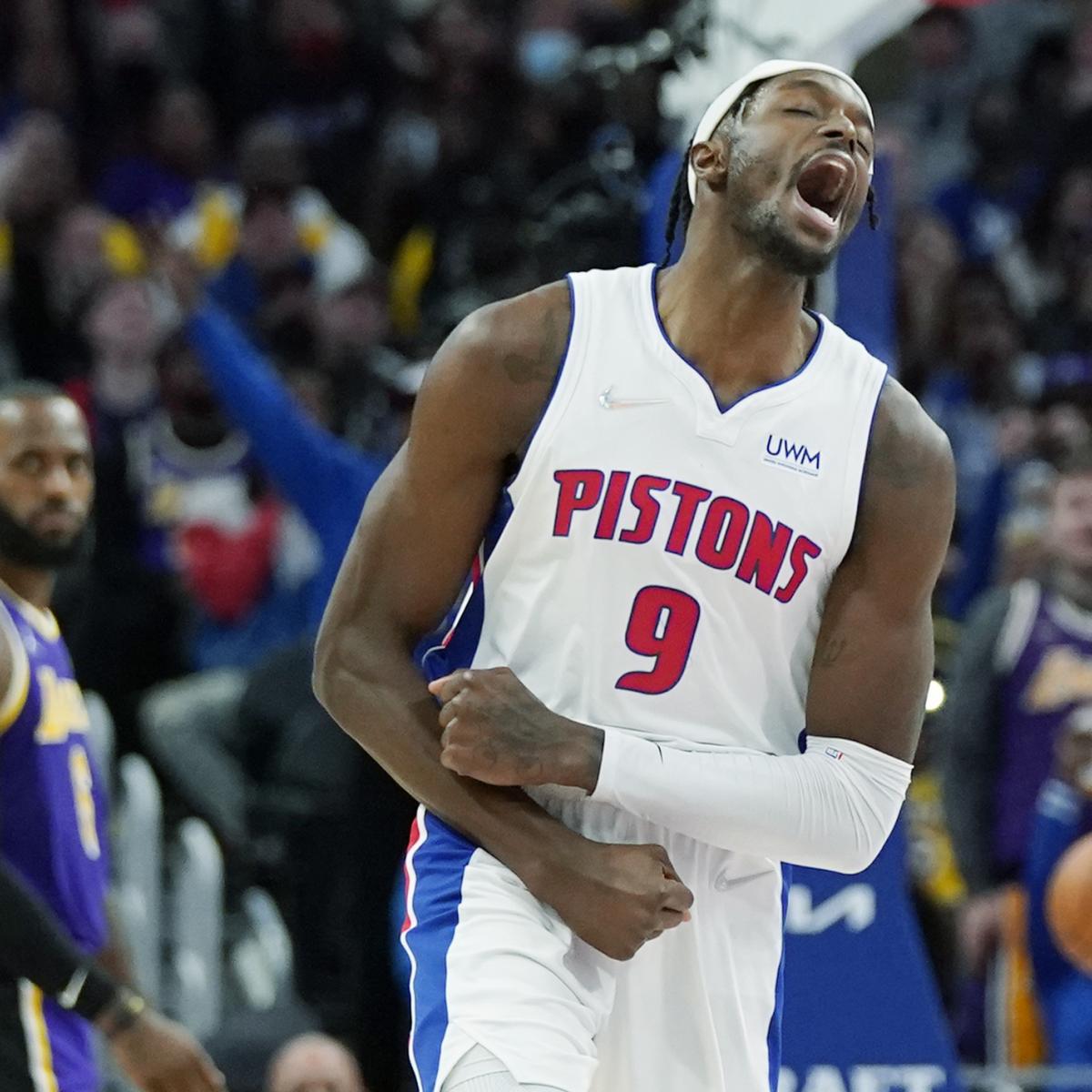 At about the 20-game mark, NBA franchises tend to do a self-evaluation. Are they one piece away? Are they better or worse than expected? Is the draft lottery increasingly appealing?

The answers will dictate each team’s path in negotiations as trade season semi-officially begins Dec. 15, when most recently signed free agents become eligible to be dealt. The trade deadline isn’t until Feb 10, but it’s never too early to start forecasting.

Will the Sixers get a Ben Simmons deal done in the coming months? Maybe not, per Sam Amick of The Athletic, citing a source with the team who said, “This is like a multiyear thing.”

But that may be posturing. Heading into the season, Philadelphia had minimal leverage with Simmons refusing to play while under a long-term, sizable contract and the 29 other teams sitting with a perfect 0-0 record. At the 20-game mark, others are facing their own issues.

Kyrie Irving has yet to suit up for the Brooklyn Nets, unwilling to get vaccinated. Neil Olshey, the Trail Blazers president of basketball operations and general manager, is “under investigation for workplace misconduct,” per Shams Charania and Jason Quick of The Athletic. The NBA changes very quickly. How many teams will be desperate for change ahead of the deadline?

A Simmons trade may or may not come, but Philadelphia could be fielding many calls before time runs out in February. As far as goals, the Sixers are looking for impact talent (with draft picks and prospects to boot). Beyond Simmons, Danny Green and possibly Tyrese Maxey—who shares an agent with Simmons in Rich Paul of Klutch Sports—could be dealt to further the team’s chances at a championship run.

A recent article by Keith Pompey of the Philadelphia Inquirer caused a bit of a stir—not because of his update on the Sixers and the Simmons saga, but because of the revelation that the Pistons might be willing to part with Jerami Grant. The buzz previously was that Grant has a close relationship with general manager Troy Weaver and is happy to stay in Detroit, despite the team’s lackluster record.

If Grant is indeed on the market, a long list of teams will pursue him, as just about every contender needs a 6’8″ defender who can also score. Grant might be the biggest name available at the deadline outside of a bombshell like Damian Lillard becoming available.

Grant is under contract at $20 million for the current season, with another year at $21 million in 2022-23. Simmons, who is only 25 years old, could make a lot of sense with three additional seasons on his deal after this one. If not, Detroit could try to cash out Grant for a mix of veterans, prospects and draft considerations. Perhaps this “ridiculous” trade with the Lakers makes more sense with the new intel that Grant may be attainable.

The Kings had hopes of making a playoff push in the Western Conference, and while they still may, their start hasn’t been encouraging. That could lead to more significant changes (beyond the firing of coach Luke Walton on Sunday), and Sacramento certainly has enough to offer ahead of the deadline.

Marvin Bagley III, who the team drafted at No. 2 in 2018 ahead of Luka Doncic and Trae Young, isn’t a regular part of the team’s rotation. Sacramento was also close to dealing Buddy Hield to the Lakers in the offseason. In addition to Bagley, the team has too many big men with keeper Richaun Holmes and potentially available reserves Tristan Thompson, Alex Len and Damian Jones.

If the Kings are looking at a blockbuster, perhaps chasing Simmons, the team could make De’Aaron Fox available. Some executives are hopeful Sacramento views Fox as expendable with promising guards Tyrese Haliburton and Davion Mitchell in the fold. So far, there’s no real buzz that’s the case. Other teams hope Harrison Barnes shakes loose too.

Whatever the case, the Kings are looking to move up in the standings, not down into the lottery.

The Magic gave forward/center Wendell Carter Jr. a four-year, $50 million extension before the season. Carter came over in last season’s Nikola Vucevic trade from the Bulls, but homegrown talent Mo Bamba (No. 6 in 2018) was not extended before the October deadline. Bamba, averaging a career-best 11.2 points, 9.4 rebounds and 2.2 blocks per game, will be a restricted free agent this summer.

Typically, a rebuilding team would look to add young players like Bamba, but with him due a contract and Jonathan Isaac (knee) hoping to return soon, the Magic may not view Bamba as a long-term piece. If not, the team could look to move him and several veterans. Gary Harris is in the final year of his deal at $20.5 million. Scoring wing Terrence Ross, who has another year at $11.5 million, is also believed to be available.

The Lakers made a massive trade over the summer, but the Russell Westbrook swap has not catapulted the team to the top of the Western Conference. The franchise may not be likely to change course, and moving Westbrook’s $44.2 million salary (plus a $47.1 million player option for 2022-23) would be extremely difficult in-season.

Outside of John Wall with the Houston Rockets (on a similar contract to Westbrook) or Kevin Love of the Cleveland Cavaliers ($60.2 million owed through 2022-23), the opportunities may be nonexistent. It’s a stretch to suggest the Rockets or Cavaliers would consider Westbrook.

After LeBron James, Anthony Davis and Westbrook, the only Lakers who earn above minimum contracts are Talen Horton-Tucker (on a three-year, $30.8 million deal) and Kendrick Nunn ($10.3 million over two). Both are young, talented guards with player options in their final seasons. Nunn has yet to play because of a knee injury.

If the Lakers are willing to include one or more of their minimum players in a trade, they could go after a player in the low $20 million range (like Jerami Grant with the Pistons). Los Angeles had the opportunity to acquire Kyle Lowry from the Toronto Raptors for Horton-Tucker (among others) but chose to reinvest in the emerging guard. He may now be the team’s only viable path to an impactful in-season trade.

Some top contenders may look to add pieces to push them over the top, including the Warriors, Suns, Nets, Heat and Bucks despite their slow, injury-fueled start. The Warriors could look to move James Wiseman, Jonathan Kuminga and Moses Moody for proven playoff performers but seem intent on holding on to their top prospects.

The teams hoping to contend (Jazz, Nuggets, Grizzlies, Mavericks), ones that have exceeded early expectations (Bulls, Hornets, Cavaliers, Clippers, Wizards) or ones that have underperformed to varying degrees (Pacers, Knicks, Hawks, Celtics) may be looking for a punch-up to join the top tier. The Cavaliers are down a guard with Collin Sexton (knee) lost for the season. The Hawks may look to move Cam Reddish and Danilo Gallinari, though Reddish may not be available until De’Andre Hunter returns from a wrist injury.

Some competing franchises are unsure what to make of the Trail Blazers. If Olshey is deposed, new leadership might take the team in an entirely different direction. If he stays, he may be unwilling to trade either CJ McCollum or Lillard.

Other teams with uncertain futures include the Timberwolves (does Karl-Anthony Towns or D’Angelo Russell become available?), Rockets, Spurs, Pelicans and Raptors.

Denial of responsibility! NewsUpdate is an automatic aggregator around the global media. All the content are available free on Internet. We have just arranged it in one platform for educational purpose only. In each content, the hyperlink to the primary source is specified. All trademarks belong to their rightful owners, all materials to their authors. If you are the owner of the content and do not want us to publish your materials on our website, please contact us by email – [email protected]. The content will be deleted within 24 hours.
activebest sports newsdeadlineNBAnews update sportsnewsupdatepredictingsports news