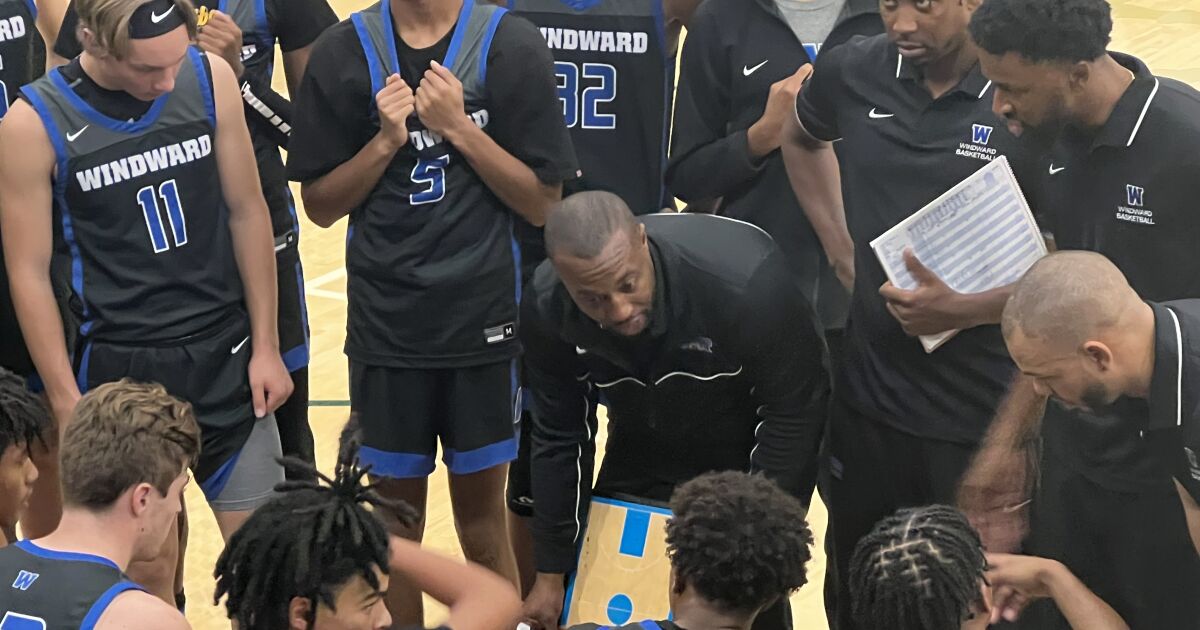 It was the strangest of coaching debuts for former Sun Valley Poly All-City guard DJ Gay on Tuesday night. His Windward basketball team went 6 minutes, 10 seconds in the first quarter without scoring a basket, then went 6:09 in the third quarter going scoreless. And yet, the Wildcats came away with a 56-50 win over St. Monica, ignited by 22 points from sophomore guard Gavin Hightower.

Windward had a 22-0 run and St. Monica had a 25-3 run. Then Windward went on a final 13-0 run to pull away. Hightower made 14 of 17 free throws and was rewarded for attacking the basket and staying poised when things weren’t going well early on.

“Gavin has to learn he can’t let offense dictate how he plays,” Gay said. “He showed growth.”

Said Hightower: “I just had to slow down.”

Luke Sammann got hot in the second half for Windward and finished with 14 points. St. Monica received 13 points from Daniel Kirakosyan, who scored eight consecutive points at one point in the third quarter.

Gay, who was coaching in San Diego before beating out a large group of candidates for the Windward job, has a young team that only figures to get better with experience.

Oak Park 73, Knight 63: The Eagles had to withstand 29 points from Knight’s Malik Larane to secure the win in the Providence tournament. Trey McDonald finished with 20 points and Isaiah Sherrard and Dylan Hayse added 16 apiece.

Chatsworth 49, Wilson 37: Vicky Menjivar had 10 points for the Chancellors.

Denial of responsibility! NewsUpdate is an automatic aggregator around the global media. All the content are available free on Internet. We have just arranged it in one platform for educational purpose only. In each content, the hyperlink to the primary source is specified. All trademarks belong to their rightful owners, all materials to their authors. If you are the owner of the content and do not want us to publish your materials on our website, please contact us by email – [email protected]. The content will be deleted within 24 hours.
Basketballbest sports newsCoachdebutgaynews update sportsnewsupdateprep

The Panamericana Is The Strangest Porsche Concept Ever Built – SlashGear