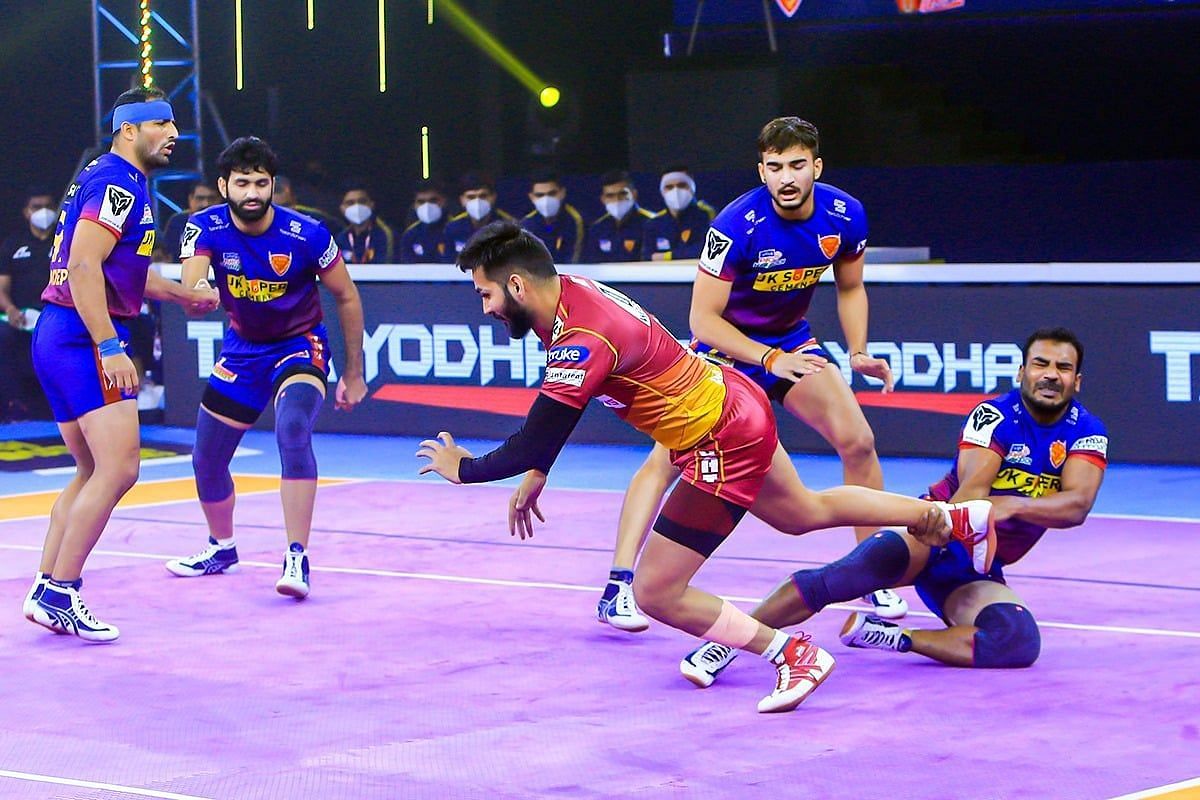 Dabang Delhi KC reached their maiden Pro Kabaddi League final in 2019 but lost to the Bengal Warriors. The defeat seems to have hurt them a lot as they have been unstoppable in Pro Kabaddi’s eighth edition so far.

The Dabangs hold second position in the PKL 2021 points table with 26 points to their name. They have played six matches so far this season, registering four victories and two draws. The Joginder Narwal-led outfit have the best score difference (+33) among all franchises.

It will be interesting to see how long Dabang Delhi KC can remain undefeated this season. The following three teams have the highest chance of handing the Delhi-based franchise their first defeat of the competition.

UP Yoddha have one of the strongest squads in this year’s Pro Kabaddi League season, but the Uttar Pradesh-based franchise are yet to reach their full potential. It is surprising to see a team with Pardeep Narwal, Shrikant Jadhav, Nitesh Kumar and Sumit not present in the top six of the standings.

The Nitesh Kumar-led outfit will be in action tonight against Dabang Delhi KC, and if they bring their ‘A’ game to the table, they could become the first team to beat Delhi this season.

For UP Yoddha to win, they need three players to fire tonight – Pardeep Narwal, Nitesh Kumar and Sumit. If they go all guns blazing, UP Yoddha can beat any team on their day.

Bengaluru Bulls are the only team above Dabang Delhi KC in the Pro Kabaddi 2021 points table at the moment. The Bengaluru-based franchise have earned two more points than the Dabangs, but have also played one more match.

The Bulls can neutralize that by defeating the Dabangs when they meet on January 12, 2022. After an embarrassing loss to U Mumba in their first match, the Pawan Kumar Sehrawat-led outfit have been unbeaten in PKL 2021.

Like Dabang Delhi KC, Bengaluru majorly rely on one raider. So if Pawan Sehrawat can outshine Naveen Kumar, the Bulls could beat the Dabangs.

While Dabang Delhi KC rely heavily on Naveen Kumar, Patna Pirates have three raiders who can win matches single-handedly – Prashanth Kumar Rai, Sachin Tanwar and Monu Goyat. If all three raiders play to their full potential, the Pirates could beat the Dabangs on January 18, 2022.

Naveen Kumar will also face a stiff challenge from Patna’s new overseas star Mohammadreza Chiyaneh. The battle between Delhi and Patna should be an entertaining one, and it should not come a surprise if the Pirates manag to defeat their rivals.

It will be exciting to see which team can stop the Naveen Express in Pro Kabaddi 2021. The Dabang Delhi KC will take the court against UP Yoddha tonight.

Denial of responsibility! NewsUpdate is an automatic aggregator around the global media. All the content are available free on Internet. We have just arranged it in one platform for educational purpose only. In each content, the hyperlink to the primary source is specified. All trademarks belong to their rightful owners, all materials to their authors. If you are the owner of the content and do not want us to publish your materials on our website, please contact us by email – [email protected]. The content will be deleted within 24 hours.
Bengaluru Bullsbest sports newsDabangDabang DelhiDelhiJoginder NarwalKabaddiKCs