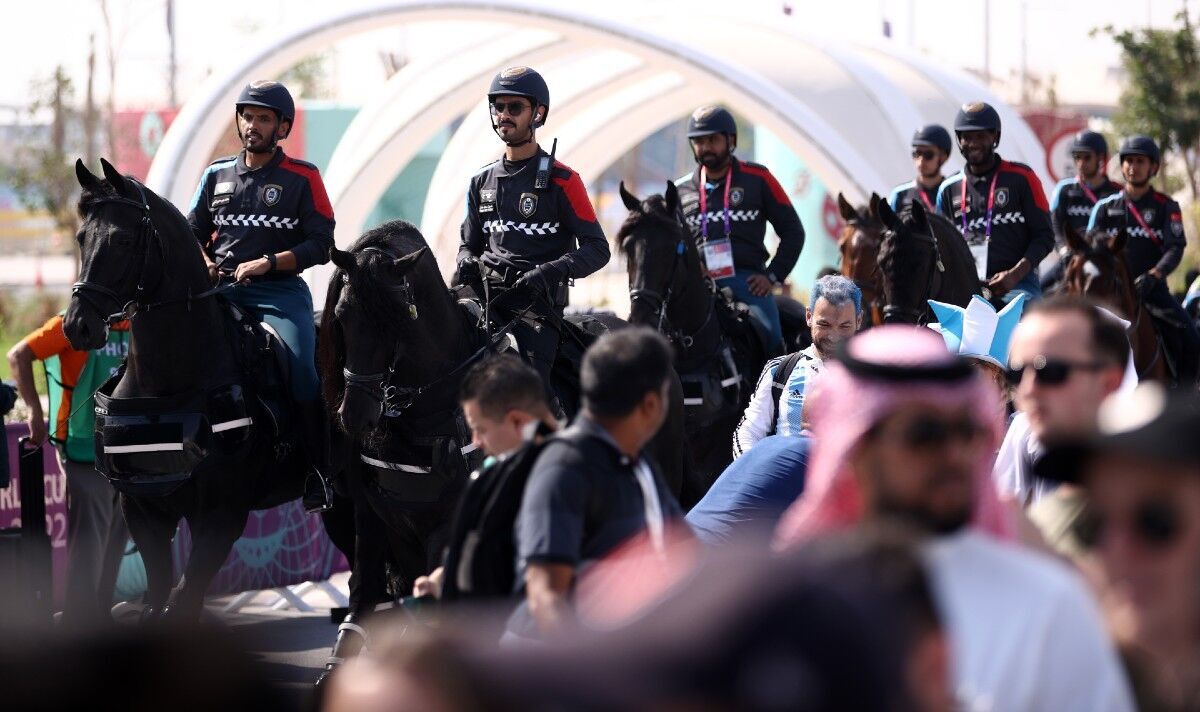 Qatar police intervened on public transport by telling some supporters off for chanting too loudly. Express Sport were in attendance as one local informed the authorities they didn’t like the noise others were making. The fans, who were from South America, then obliged – but were visibly unhappy with the request.

Since arriving in Qatar, the police have been nothing but helpful and respectful of the tourists in the country.

However, they showed a strict side to them by lecturing some supporters who were chanting on the Metro on Monday night.

A local, who was sat down, actively informed the authorities that he didn’t like the noise they were making as they went on patrol down the carriage.

He appeared to gesture to his head, as though he had a headache, and the police then approached the loud fans in question.

Some appeared to be from Ecuador, who cruised to a 2-0 victory Qatar in the opening game of the competition on Tuesday.

And there also some Argentinean fans present as well. They kick off against Saudi Arabia on Tuesday.

The supporters in question were respectful of the police, who gestured for them to tone down their chanting to ensure the carriage was peaceful.

But, once the authorities vacated the train, they proceeded to stare down the carriage at the person who had informed on them.

The Qatar Metro is, however, outstanding.

Media are able to travel around on it free of charge using their accreditation, which was collected before the tournament commenced.

It is pristine, sparklingly so, with barely any litter or rubbish visible.

That, perhaps, may be due to the fact that eating on the Metro is banned – unlike in England, where people are able to tuck into food on public transport.

Another incident at the World Cup to have involved police was when they offered a reporter, Dominique Metzger, the chance to decide the punishment for somebody who robbed her.

She said: “I went to the station and that was when the cultural differences began.

“The policewoman said to me: ‘We have high-tech cameras everywhere and we are going to locate him [the thief] with face detection.

“‘What do you want the justice system to do when we find him?

Footage also went viral earlier in the tournament when Danish network TV2 were approached and told to stop filming.

“Upon inspection of the crew’s valid tournament accreditation and filming permit, an apology was made to the broadcaster by on-site security before the crew resumed their activity.

“Tournament organisers have since spoken to the journalist and issued an advisory to all entities to respect the filming permits in place for the tournament.”

Denial of responsibility! NewsUpdate is an automatic aggregator around the global media. All the content are available free on Internet. We have just arranged it in one platform for educational purpose only. In each content, the hyperlink to the primary source is specified. All trademarks belong to their rightful owners, all materials to their authors. If you are the owner of the content and do not want us to publish your materials on our website, please contact us by email – [email protected]. The content will be deleted within 24 hours.
best sports newsCupFansintervenenews update sportsnewsupdatePolicepublic

How to use Apple Passkeys on iOS 16 – Times of India