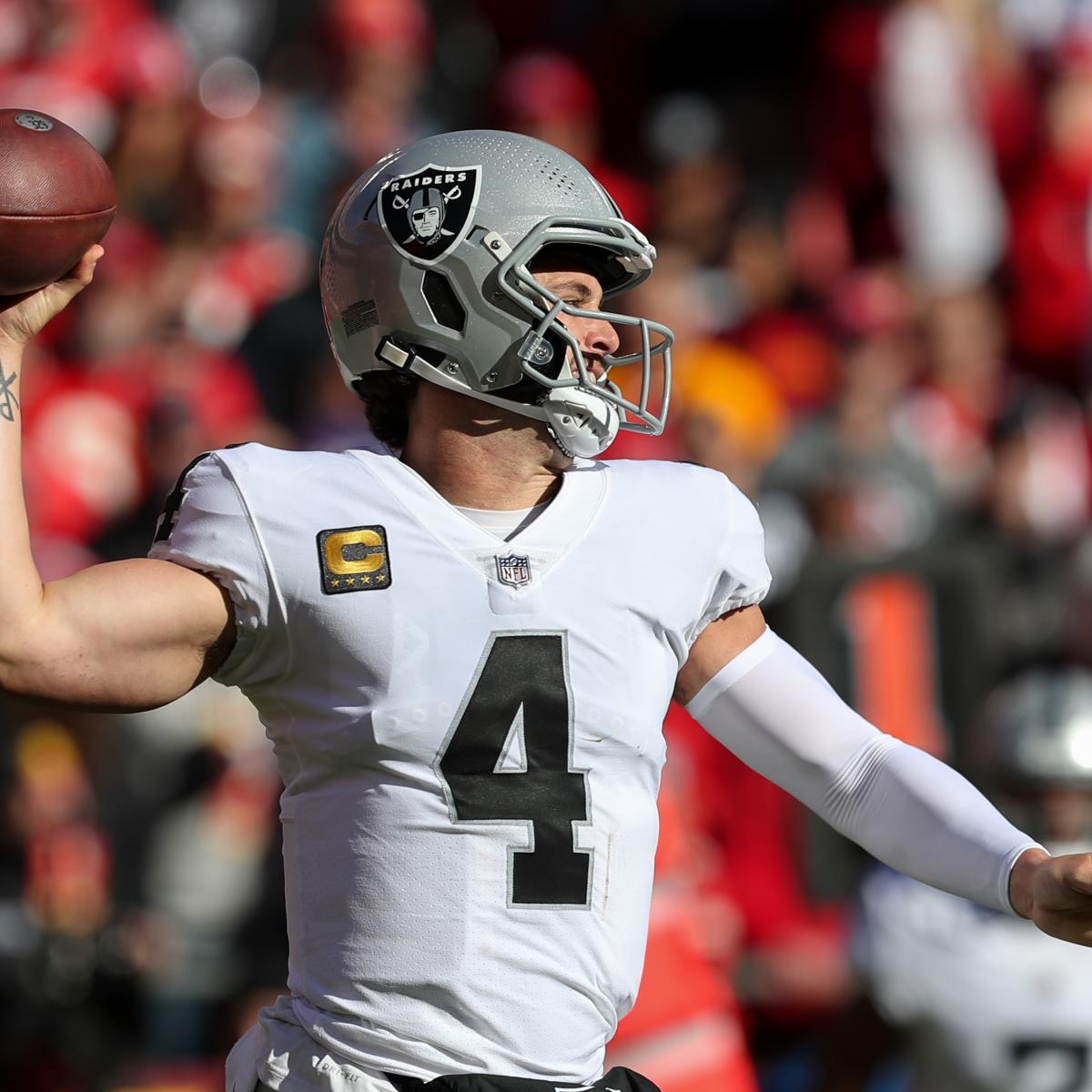 On paper, the Las Vegas Raiders offense looks like one fantasy football managers are going to want to have some stake in.

Davante Adams can work as the rising tide that lifts all boats. The former Green Bay Packers receiver has the ability to shift the defense’s attention to himself and lighten the load of every player in the offense.

Add in the presence of Josh McDaniels as the new head coach, and there’s plenty of reason to be optimistic about the offense in general.

Figuring out which players to target is key. Based on average draft position at FantasyPros, two players are in a position to exceed expectations from where they are being drafted. We’ll also highlight one name to target in dynasty drafts.

Derek Carr was a borderline QB1 in 2021. He finished 13th among all quarterbacks last season and had seven games in which he scored at least 19 points in standard leagues.

The 31-year-old did all that despite losing Darren Waller for six games and, for much of the season, having Bryan Edwards as his No. 2 receiver and Hunter Renfrow as his top target.

Now, he has Davante Adams as his top receiver, a healthy Waller, and Renfrow able to play as a true No. 3 option, which is where he can do his best work.

McDaniels was able to get several starter-worthy performances from Mac Jones in New England last season. With Jakobi Meyers working as his No. 1 receiver, the rookie Patriots QB had eight games in which he scored at least 15 points in standard leagues.

Carr is a perfect example of being rewarded for waiting on a quarterback. At his current ADP, he can be had in the 10th or 11th round depending on league size. Yet, he’s likely to put up starter-worthy numbers more consistently in a new system with a major upgrade at wide receiver.

If Josh McDaniels brings the same approach to running backs as he did in New England, fantasy managers are bound to get frustrated. Those who take Josh Jacobs at his current ADP of 39 (RB19) are not going to have a good time.

The Patriots have long utilized a committee approach at running back, often with very defined roles. Jacobs might handle their base run plays, but it’s unlikely he’s a three-down back.

The team is not committed to him financially beyond the season, and the Raiders have a talented stable of running backs. Not least of which is Kenyan Drake.

The 28-year-old has kind of been forgotten after a 545-yard, three-touchdown campaign in his first season with the Silver and Black.

However, Drake proved he can produce in a split backfield in Arizona. In 2020, he had over 1,000 total yards and 10 touchdowns. He projects to carry the James White role as a pass-catching back in McDaniels’ offense.

That role carries a lot of upside, especially in points-per-reception formats. Don’t be surprised if he’s the biggest beneficiary of the coaching change in the backfield.

Kenyan Drake might be the best value in 2021, but the back to have in dynasty formats for the next few seasons is Zamir White.

The Raiders didn’t have much draft capital this year, so the fact that they were willing to utilize a fourth-round pick on the 22-year-old is telling.

It’s going to be difficult for White to carve out a role in 2022, but he did earn a 9.82 relative athletic score (out of 10) in his predraft testing.

Here’s a snippet of his Bleacher Report Scouting Report from Nate Tice:

“White would be best paired with a more finesse-style back who allows him to get touches that take advantage of his hard runs. He can be an effective back very early in his career in an offense that features downhill runs that lets him set the tone.”

If White can prove himself as a rookie, it would set up the Raiders with a much cheaper alternative to signing Josh Jacobs. The team declined his fifth-year option, paving the way for them to make that kind of decision at the end of this season.

White is currently going in the late-second round of dynasty rookie drafts. That’s a good price to pay for a player who could be the top running back on his team by 2023.

Denial of responsibility! NewsUpdate is an automatic aggregator around the global media. All the content are available free on Internet. We have just arranged it in one platform for educational purpose only. In each content, the hyperlink to the primary source is specified. All trademarks belong to their rightful owners, all materials to their authors. If you are the owner of the content and do not want us to publish your materials on our website, please contact us by email – [email protected]. The content will be deleted within 24 hours.
best sports newsDynastyfantasyFootballLeaguesnews update sportsnewsupdateRaiders

With Cameras on Every Phone, Will Broadway’s Nude Scenes Survive?