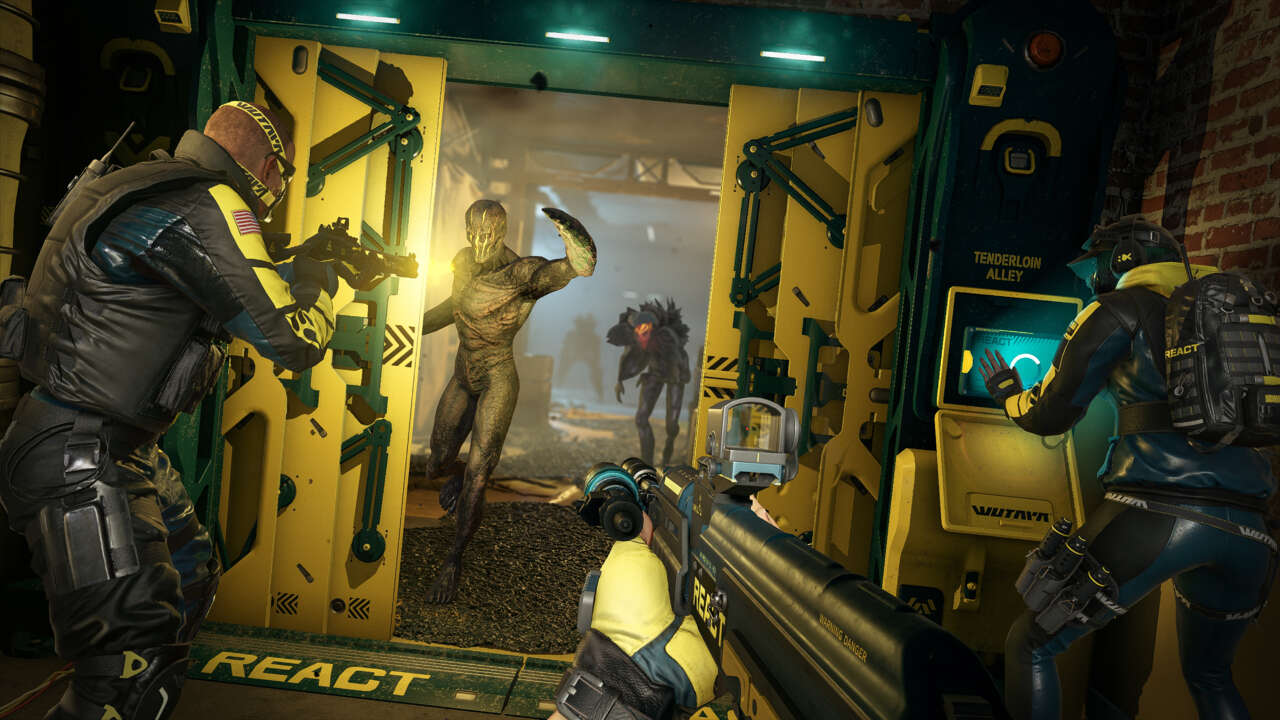 Rainbow Six Extraction reimagines the tight, team-focused world of Rainbow Six Siege as an unforgiving PvE experience where teams of three take on an alien threat known as the Archaeans. In Extraction, it’s team up or die, but the finer details go far beyond that: Simply surviving is only the beginning. In time, you’ll want to thrive, because the best Operators will walk away bathed in XP, rather than crawling for the exit. In this beginner’s guide, we walk you through 15 tips for not only making it out alive, but doing it efficiently too.

Get on the mic

The first and arguably most important tip we can provide is to get on the mic. In Rainbow Six Extraction, team communication is critical. This is a game that demands a close-knit group and isn’t really going to turn out well for lone wolves who don’t communicate with their squad. Get your headset on and work together. The Archaeans are absolutely fatal, even in small numbers, so talking with your allies is the foremost way to stay on your feet and completing objectives.

Every round of Extraction is called an Incursion, and every Incursion is broken into three sub-zones, each with randomly-generated objectives. You’ll always be able to see those objectives in each area before you embark on an Incursion, so use that intel when choosing your Operator. If you need to quickly locate tech objects, IQ is your best bet. Meanwhile, sneaking up and stealth-killing particular Archaeans can be done easily with Vigil thanks to his cloaking ability. Rounding out your three-Operator team is key, so choose wisely and make sure your teammates do too.

While the game’s difficulty ramp will reward improved XP rewards at every new milestone, your best bet to level up your overall career and individual Operators will be Studies. These are Extraction’s map-specific in-game challenges. Each map has several pages of challenges, and each page features three Studies. You’ll need to complete an active page before unlocking a map’s subsequent page until eventually you’ve completed them all. When trying to level quickly, it’s sometimes a better idea to complete Studies at more manageable difficulties than playing a harder map where you may not have any challenges available.

Another key to a successful Extraction is good nest management. Nests are the glowing spores from which virtually all of a sub-zone’s Archaeans spring, and each sub-zone begins with these nests lying dormant. The trick is to keep them that way. By taking out nests quietly, you’ll avoid stirring them into spawning many more Archaeans. Remember that when an Archaean spots you, it’ll perform a shrieking scream that alerts nearby nests, so not only should you take out nests, but you’ll want to stealth-kill roaming Archaeans too.

Use silencers whenever possible

Going hand in hand with the last tip is this one: Be quiet! It’s almost never necessary to use guns without silencers attached, and if you can perform a melee takedown stealthily, then you’re even better off. Some Operators start with guns that don’t have silencers, but most guns offer the option. Like in Siege, all attachments for a particular gun are unlocked with the gun itself, so customize those loadouts to stay quiet. The minor damage dropoff from a muzzle brake to a silencer is not worth stirring the alien horde.

Though Extraction rewrites many of the rules of Siege, it also retains a lot of the core DNA of that hardcore shooter. Among those commonalities is the ability to creatively use your environment. This is best exemplified by things like shooting through walls or barricading doors when you need to hunker down and defend an area. Note that all guns in Extraction include a special flashlight affixed to the front that can identify alien threats on the other side of breakable walls. Use this tactic to take out Arcahaeans easily and without ever putting yourself in their sight lines.

Know when to cut and run

As we mentioned earlier, each Incursion is broken into three parts–except for the endgame Maelstrom Protocol, which takes a whopping nine sub-zones to fully complete. Ideally, you’d always complete all objectives on all sub-zones. Realistically, however, that just won’t be the case. Sometimes you’ll find yourself limping to the end of an earlier sub-zone, and in those moments, it’s worth considering an early exit. When you survive an Incursion (even if you leave early), you’ll take all banked XP with you, as opposed to when you’re captured and that XP will be left in limbo until you return to the area for a rescue attempt that isn’t guaranteed to work. It’s humbling, but sometimes it’s the best-case scenario to make it out alive with a lesser bundle of XP.

Resources are scattered and in short supply in each Incursion, so it’s important not to hoard them all for yourself. When you bring up the map menu, you’ll see a live tracker of how many resource caches are left in your active sub-zone. These can be things like health kits, ammo boxes, React Tech refills, and ability recharges. The upper limit for carrying most of these things is higher than you’ll probably ever need if you took them all yourself, so share the wealth! Don’t grab ammo if you’re looking good in that department. Likewise, if you an ally needs health and you don’t, let them know you’ve found it rather than take it for yourself. A greedy player won’t make it to the end without two well-equipped allies by their side anyway.

Extraction, like most modern shooters, features a handy ping system, and you should use it liberally. Pinging threats puts them on the UI for your whole team, and if you hold the ping button (up on the D-pad by default), you’ll bring up a communication wheel that is a bit more robust. Though this deeper level of on-screen chatter is a great supplementary tool for teams, it’s also no replacement for voice comms, so don’t take this tip to mean you can skip that first one. Still, it’s always nice when teammates are calling out aliens, nests, supplies, and more around every corner.

Speed things up in the safe rooms and extraction zones

While most of these tips focus on things like staying alive and prepared for what’s ahead, this one is more along the lines of a quality-of-life consideration. Whenever you need to vote on something as a group, be it calling for Extraction or opening the next sub-zone, a full team vote speeds up the process. You’ll always need a majority vote to initiate any such actions, but that merely starts a 25-second timer. If things are getting dicey, or you just want to move things along more quickly, make sure everyone on your team is voting for an action, because doing so makes it happen almost instantly.

Some Incursions are bound to get ugly, and the worst of them will result in your Operators being claimed by the Archaean Tree if they’re defeated in a zone. You’ll have a few chances to rescue them by returning to their last location and freeing them from the tree. While one person works on pulling them out of the tree, the other two players will need to destroy nodes moving from the tree’s roots, or else the rescue will fail. The best way to one-up the Archaean Tree is not to simply shoot these nodes as they come down the veiny roots, but to destroy those roots themselves. When the bioluminescent roots light up, they’ll be vulnerable for a few seconds. Shoot them to slow the spread of these nodes entirely.

Extraction is as much about preparation as it is execution. Even the best shooters will be close to helpless without planning ahead, so treat every sub-zone like a renewed opportunity to get a lay of the land. Seek out any especially hazardous areas, destroy nests whenever you can, and find certain objectives, like on a Triangulation mission, before you kick things off. A lot of missions start in this static space where you can give yourself a better chance of surviving if you know what’s around every corner and which route you’ll take to get out when your objective is completed.

Some Archaeans only spawn on higher difficulties

Sometimes your Studies will call for killing particular types of Archaens, like Tormentors, Spikers, and Breakers. You may have a hard time finding them if you’re on the wrong difficulty. The game’s four difficulty modes include different pools of enemies, with the harder difficulties opening up more and more enemy types to players. Be sure that you’re raising that difficulty if you need to locate specific types of enemies. A good cheat sheet to consider is that when an area, such as Alaska, includes a challenge to take out a specific kind of alien, such as Tormentors, it’s best to play that Incursion on its recommended difficulty level, which you can see on the level select screen.

The Sprawl is soon to be your worst enemy in Rainbow Six Extraction. Every type of enemy can be dealt with, but the Sprawl–the movement-slowing black sludge found all over the world–can turn any effective Operator into a punching bag. There are two great ways to deal with the Sprawl. The first is to kill enemies in their weak spots. When killed that way, the Archaeans don’t leave Sprawl behind, meaning you can clear the area of aliens and prevent the appearance of their restrictive goo in sometimes just a single shot. Archaean weak spots will glow a pinkish hue when you’re aiming at them, so target those spots to more cleanly dispatch the invaders.

Inevitably, you’ll have to deal with some Sprawl though, either because it was there before you arrived or because your spraying and praying resulted in quite a clean-up job. To reverse the creeping Sprawl, you can melee it or shoot it, giving you back your mobility. Oftentimes, you’ll even want to remove Sprawl along an objective’s planned route before you begin that objective–remember: Scout, then execute! If you take out the Sprawl when things aren’t so chaotic, you’ll give yourself a much better chance of escaping with your life and all of your XP.

Denial of responsibility! NewsUpdate is an automatic aggregator around the global media. All the content are available free on Internet. We have just arranged it in one platform for educational purpose only. In each content, the hyperlink to the primary source is specified. All trademarks belong to their rightful owners, all materials to their authors. If you are the owner of the content and do not want us to publish your materials on our website, please contact us by email – [email protected]. The content will be deleted within 24 hours.
Archaeansbeginnersbest games newsExtractiongame updategames newsguidenews update games