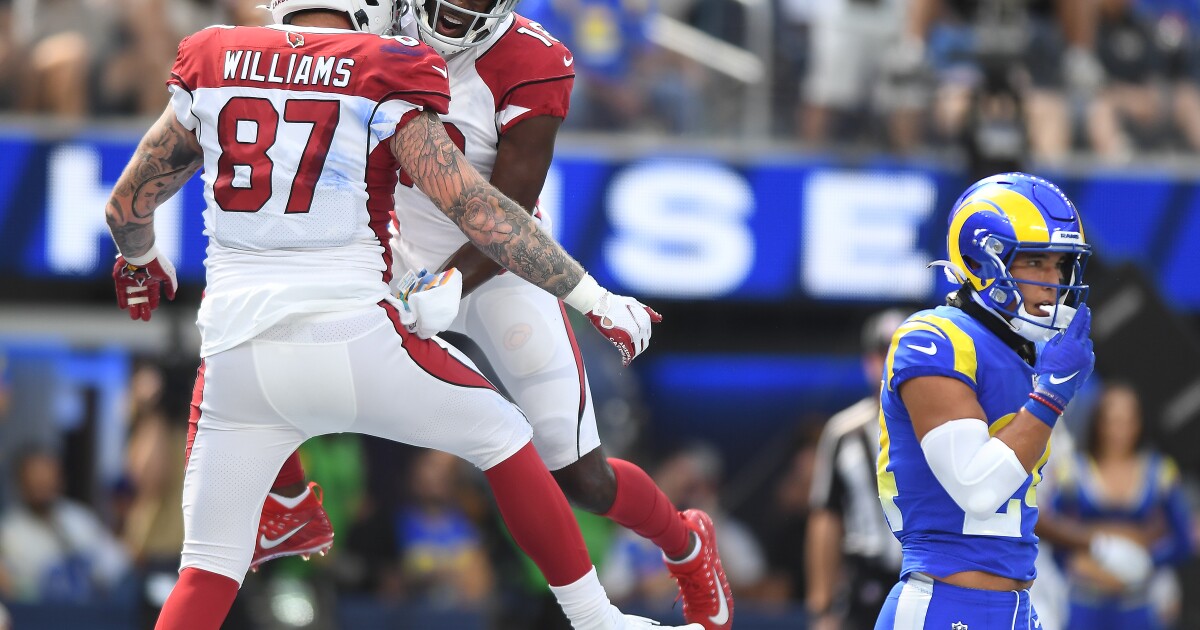 Rams’ life in fast lane: No time to lose with trip to Seattle on Thursday

No time to look back.

The Rams have only a few days to prepare for Thursday night’s NFC West road game against the Seattle Seahawks, so players and coaches did not spend much time reflecting on their defeat to the Arizona Cardinals.

“For now, it’s really turn the page to Seattle and everything you can do to cram information for that,” offensive lineman Andrew Whitworth said Monday. “And also, most importantly, get your body ready.”

After the loss, Rams cornerback Jalen Ramsey said he understood the benefit of Thursday night games from a television ratings and NFL marketing perspective. But he is not a fan of having only a few days between games.

“I never liked quick turnarounds, win, loss or whatever,” he said.

The quick turnaround does, however, offer one benefit, coach Sean McVay said.

“We’re excited about the opportunity to respond, and so that’s what we’re looking to do,” he said Monday, adding, “It was not the outing that we wanted from anybody, myself included, but fortunately we’ve got a short week to be able to dust ourselves off, get back up and get ready to roll.”

The Seahawks are 2-2 and 1-0 in the division after defeating the San Francisco 49ers on Sunday.

Rams quarterback Matthew Stafford spent 12 seasons with the Detroit Lions playing in the NFC North. He has a 1-4 record in games against the Seahawks. He is 0-3 in games in Seattle, including a 2016 season playoff defeat.

The short turnaround should not adversely affect Stafford, according to McVay and Whitworth.

“It’s a factor, but he was in here studying,” McVay said.

Said Whitworth: “I would argue he’s probably seen the coverages and defense that about anybody’s going to play.”

The open date after a Thursday night game also serves as a “mini-bye,” that works well with another scheduled open date Nov. 21, McVay said.

“Earlier is better,” McVay said, “especially if it’s a handful of weeks away when your normal bye.”

A week after they defeated the defending Super Bowl champion Tampa Bay Buccaneers, the Rams were outplayed in every phase by a Cardinals team that established itself as a legitimate contender for the division title.

The opportunity to play the defending division-champion Seahawks, even with only a few days preparation, is something to “relish,” Whitworth said.

The message throughout the abbreviated week is to prove that the performance against the Cardinals was uncharacteristic.

“You’ve got to relish moments like this,” he said. “If you like playing NFL football, if you enjoy sports and competition, then you should love nothing more than an opportunity where you get humbled and you have a chance to respond.”

Denial of responsibility! NewsUpdate is an automatic aggregator around the global media. All the content are available free on Internet. We have just arranged it in one platform for educational purpose only. In each content, the hyperlink to the primary source is specified. All trademarks belong to their rightful owners, all materials to their authors. If you are the owner of the content and do not want us to publish your materials on our website, please contact us by email – [email protected]. The content will be deleted within 24 hours.
best sports newsFastlanelifelosenews update sportsnewsupdateRams

Namibia Coach: We didn’t come here to lie down, we…

Can Purton produce more Montaro mastery or will familiar…