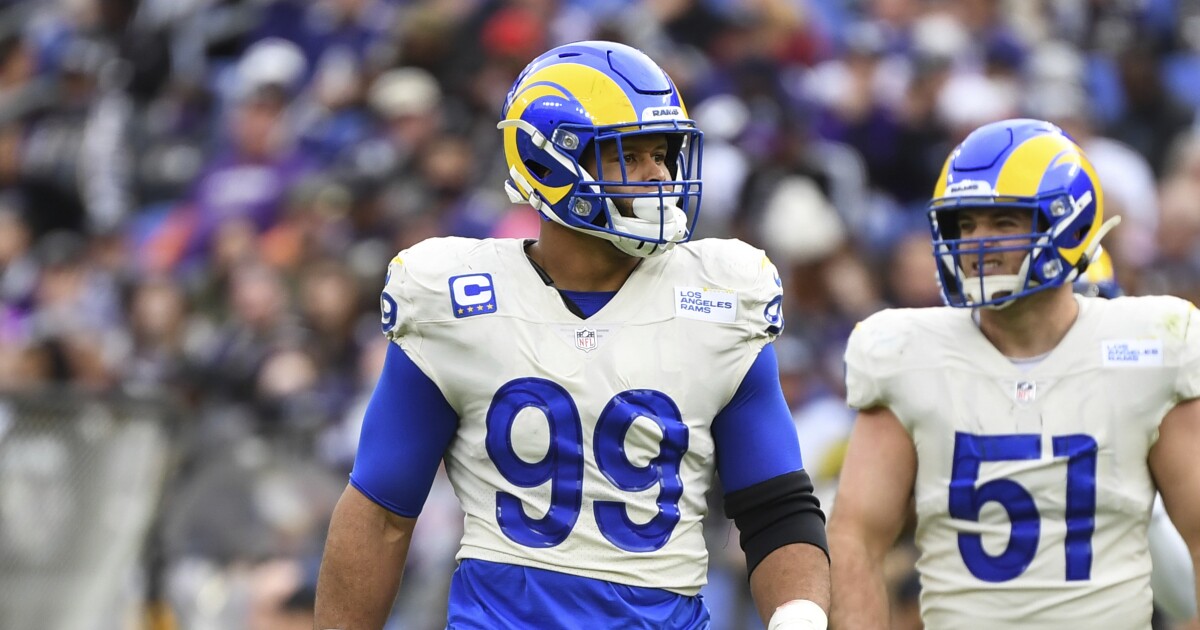 Rams vs. San Francisco 49ers: Matchups, start time and how to watch

When Rams have the ball: Quarterback Matthew Stafford committed six turnovers in the last two games — and the Rams won both. That is not a sustainable model for success, regardless of how good Stafford can be directing drives in the final minutes. Stafford had two early turnovers in a 31-10 loss to the 49ers in November, including a pick-six by safety Jimmie Ward. Stafford has passed for 38 touchdowns with 15 interceptions. Four of the interceptions were returned for touchdowns. Wide receiver Cooper Kupp needs 11 catches to tie Michael Thomas’ NFL record of 149, set in a 16-game season in 2019. Kupp needs 135 yards receiving to tie Calvin Johnson’s record of 1,964 set in 2012 in 16 games. Wide receiver Odell Beckham Jr. caught the game-winning touchdown pass last Sunday at Baltimore, increasing his total to five touchdowns in seven games with the Rams. Running back Cam Akers, who suffered a torn Achilles in July, is expected to return in a limited role behind starter Sony Michel. The Rams have won five games in a row since Michel became the starter. End Nick Bosa has 15 sacks for a 49ers defense that also features end Arik Armstead and linebacker Fred Warner. Ward was among several defensive backs activated to the roster from the reserve/COVID-19 list Saturday.

When 49ers have the ball: Quarterback Jimmy Garoppolo is listed as questionable because of a thumb issue but is expected to play. Against the Rams in November, Garoppolo completed 15 of 19 passes for 182 yards and two touchdowns. If Garoppolo struggles or is injured, coach Kyle Shanahan can turn to Trey Lance. The third pick in the 2021 NFL draft started last Sunday against the Houston Texans and completed 16 of 23 passes for 249 yards and two touchdowns with an interception in a 23-7 victory. He also rushed for 31 yards in eight carries. Running back Elijah Mitchell has run for 878 yards, including 119 against the Texans. Deebo Samuel is one of the NFL’s most versatile players. He has 73 receptions, six for touchdowns, and also has run for seven touchdowns. Tight end George Kittle has 66 catches, six for touchdowns. Wide receiver Brandon Aiyuk has five touchdown catches. Rams outside linebacker Von Miller had two sacks against the Ravens and appears to be finding his stride in a front that includes Aaron Donald, who has 121/2 sacks. Jalen Ramsey struck safety Taylor Rapp in the face during last week’s game but said there are no lingering problems between the players.

When they kick: Rams kicker Matt Gay had a rare miss against the Ravens, but he has made 31 of 33 field-goal tries. Johnny Hekker has averaged 42.3 net yards per punt, and other Rams special-teams units appear to be playing better. Robbie Gould has made 18 of 21 field-goal attempts for the 49ers. Mitch Wishnowsky has averaged 41.2 net yards per punt.

Gary Klein’s prediction: With the Rams riding a five-game winning streak, coach Sean McVay will end his five-game losing streak against Shanahan, and the Rams will win the NFCWest and earn the No.2 seed in the NFC playoffs.

Denial of responsibility! NewsUpdate is an automatic aggregator around the global media. All the content are available free on Internet. We have just arranged it in one platform for educational purpose only. In each content, the hyperlink to the primary source is specified. All trademarks belong to their rightful owners, all materials to their authors. If you are the owner of the content and do not want us to publish your materials on our website, please contact us by email – [email protected]. The content will be deleted within 24 hours.
49ersbest sports newsFranciscomatchupsnews update sportsnewsupdateRamsSan