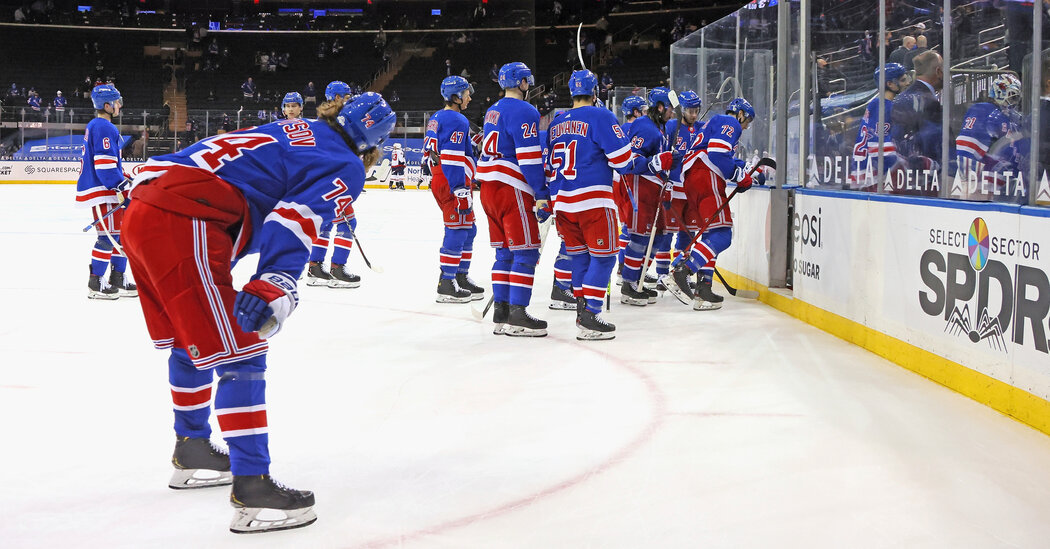 The Rangers’ regular season may have been shorter than usual, but it was filled with turmoil.

Just last week, there was the stunning firing of John Davidson, the team president, and Jeff Gorton, the general manager, with three games remaining and a brawl-filled home finale against the Washington Capitals.

The 56-game season also included a leave of absence by the leading scorer Artemi Panarin after an accusation of an assault a decade ago in Russia that he and the team have denied; the abrupt early-season dismissal of defenseman Tony DeAngelo; and a 9-0 victory with the entire coaching staff sidelined by coronavirus protocols.

“It’s been a crazy year, definitely a season you won’t forget,” said the veteran forward Mika Zibanejad, who finished with 24 goals and 50 points in his fifth season with the Rangers despite a slow start as he played while recovering from Covid-19. “I’m just really proud of the guys in the locker room. Everything that we’ve been going through together, I think it brought us closer.”

The Rangers were still in the playoff race in the final two weeks, but the team will shift to off-season mode once again without a chance at the Stanley Cup but with firm resolve that next spring will be different.

The franchise will aim for a postseason berth in 2022 with Chris Drury, a former Rangers captain, as the new president and general manager.

Coach David Quinn’s Rangers held their own against playoff-bound rivals on many nights and appropriately dominated the East Division’s doormats, the Sabres and the Devils. But their inexperience and inability to adjust in three late-season games against the postseason-bound Islanders — albeit without key players who were injured — resulted in three desultory losses, proving how much ground they must gain to become playoff-worthy.

It will be up to Drury, 44, who took over for Davidson and Gorton on Wednesday, to create a roster to meet that challenge.

“I really believe in what we have accomplished since ‘The Letter,’” Drury said last week, referring to a missive to the fan base in February 2018 asking for patience while the franchise restocked talent.

As with any off-season, roster changes are inevitable. And after the postseason miss and bold management shake-up, they could be significant for the Rangers.

Some pieces may already be in place. On the back end, Drury has the sterling second-year defenseman Adam Fox and his partner Ryan Lindgren. Fox finished with 47 points — making him a top contender for the Norris Trophy — and Lindgren, 23, provided muscle and steady defensive play so successfully that he was rewarded on Monday with a new three-year contract.

Drury will also have three other key players who will be in their early 20s at the start of next season: the 2020 first overall pick Alexis Lafreniere, the 2019 second overall pick Kaapo Kakko and the 2018 first-rounder K’Andre Miller. Lafreniere had 12 goals in his rookie campaign, Kakko had nine goals in his second season and Miller had five goals and a plus-9 rating in a steady rookie season mostly skating alongside the veteran Jacob Trouba.

“Obviously we had a great group of older guys that kind of helped paving the way and kind of showing us what it meant this first year what it meant to be a Ranger and how hard the N.H.L. is going to be,’’ Miller said. “They did a great job with that in helping me and kind of getting me situated and comfortable playing at this level.”

Lafreniere, 19, said he was buoyed by the presence and quiet leadership of Zibanejad, one of only four Rangers (along with Chris Kreider, Pavel Buchnevich and Brendan Smith) who were with the Rangers when they last won a playoff series, in 2017.

“He’s a real leader, and for me he’s one of the guys I’ve really looked up to just to see his game and the way he plays,” Lafreniere said. “He always has good advice for me, and it helps me on and off the ice.”

Kreider, the team’s longest-tenured player, said lessons from such a peculiar season could only help the maturing squad.

“I think the entire year was a terrific learning experience,” said Kreider, who scored 20 goals for the sixth time in his career but missed six games with a lower back injury in the final weeks. “A lot of difficulties but so many things we can learn from and take from, going into a full off-season and a full year next year.”

Denial of responsibility! NewsUpdate is an automatic aggregator around the global media. All the content are available free on Internet. We have just arranged it in one platform for educational purpose only. In each content, the hyperlink to the primary source is specified. All trademarks belong to their rightful owners, all materials to their authors. If you are the owner of the content and do not want us to publish your materials on our website, please contact us by email – [email protected]. The content will be deleted within 24 hours.
best sports newsCrazymovenews update sportsnewsupdateRangersSeasonsports news