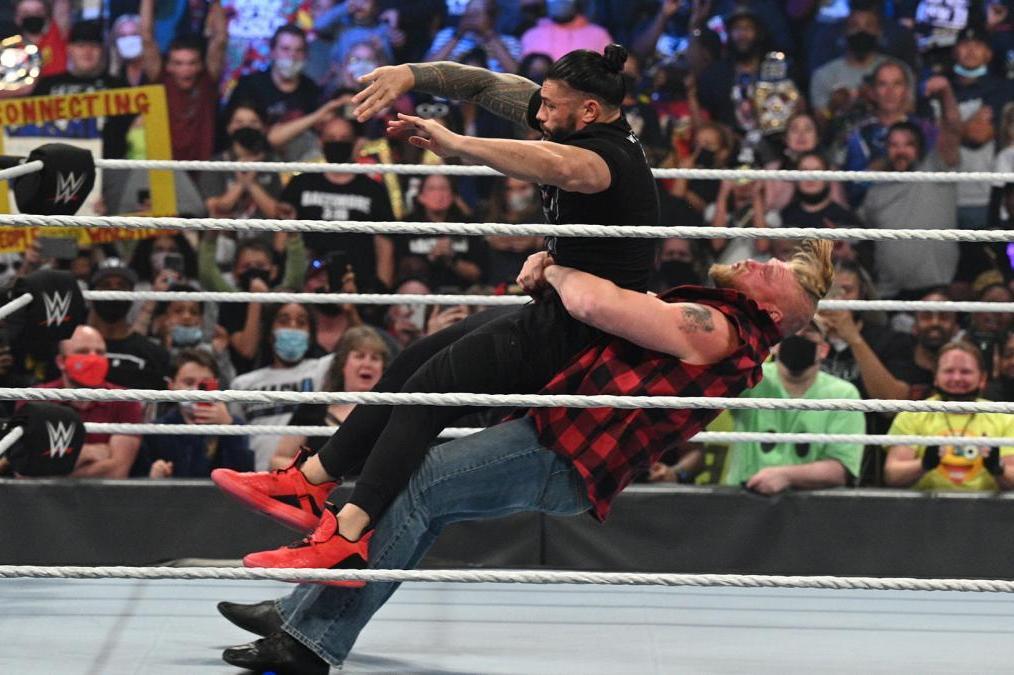 Ranking Roman Reigns vs. Brock Lesnar and the Hottest Storylines of the Week

Welcome to another edition of our ranking of the hottest wrestling storylines of the week, a weekly column that offers a glimpse into the best feuds and moments from around the industry.

Some fans are still reeling after WWE Extreme Rules and the underwhelming finish of its main event. Nevertheless, we were still treated to some great programming throughout the week. Honestly, Raw has even improved over the last few weeks.

WWE’s flagship series has been in a creative rut for months. As a matter of fact, it still has some glaring issues but some fresh matchups and a new WWE champion have helped it tremendously. It won’t be a drastic departure for some viewers but any improvement is welcomed.

Meanwhile, Impact and AEW continue to build momentum ahead of its upcoming pay-per-view events. With Bound for Glory on the horizon, expect to see some long-term plots come to a head. At any rate, let’s take a look at how the most entertaining storylines rank this week

Seth Rollins and Edge’s feud is still loads of fun but it dropped back down to the sixth spot this week.

Both men are cutting exceptional promos and that’s what is keeping this heated rivalry alive. This week, The Rated R Superstar returned to SmackDown and took the spotlight and gave an impassioned retort to weeks of admonishing barbs from Rollins.

Not to be completely upstaged, The Visionary went to his opponent’s house and mocked him again from afar. On one hand, this segment was so good because it played up the nostalgia derived from other iconic home invasion angles.

However, it was disappointing for the same reason as Rollins’ romp through Casa de Copeland was very tame in comparison to similar segments. The Drip God ate Edge’s food, drank straight from his bottle of orange juice, and put his feet on the furniture. But he never did anything that horrendous.

Yes, that’s a part of what makes him such a great heel. He does just enough without crossing certain lines so he can feign innocence later. Still, this segment felt a little pointless because the former universal champion didn’t really accomplish much of anything.

The conclusion of Miro’s title feud with Sammy Guevara moves up a spot to land at five this time around.

AEW did a great job using seemingly throwaway matches with Fuego Del Sol to build towards this matchup. It was a fantastic way to cement The Spanish God as a babyface and finally move him into the title picture.

Miro is such a riveting heel champion and Guevara represents a challenger that is his polar opposite. Pro wrestling is just that simple sometimes and it’s easy to buy into understated programs like this when it’s done well.

There was plenty of hype around this match last week and the main event of Dynamite delivered an incredible showcase of physicality and athleticism. In the end, the 28-year-old pulled off an upset to send the crowd home happy and secure his first championship win with AEW.

Last week, Sasha Banks’ return at Extreme Rules landed at number one but it dropped thanks to a crowded episode of SmackDown.

Frankly, her comeback never got a chance to breathe because there was so much screen time devoted to the WWE draft and other inconsequential moments. The Legit Boss never even cut a promo to attempt to explain her absence or promote the main event.

Speaking of which, Banks and Belair’s WrestleMania rematch, which was supposed to take place at SummerSlam, was relegated to a TV match. That’s not necessarily a bad thing on the surface, but it lacked the heat, significance, and build that it should’ve had.

Using such a big match that WWE didn’t pay off at The Biggest Party of the Summer just to promote the SmackDown Championship at Crown Jewel seems pretty shortsighted. The match was excellent because The Blueprint and The EST still have such electric chemistry, but Becky Lynch’s commentary was distracting.

To add to that, Charlotte Flair entered the fray after Lynch helped Banks pick up the win. Nonetheless, this is still an exciting feud because each opponent has well-established motives but there were just too many moving parts this week.

Mickie James vs. Deonna Purrazzo comes in at third for a second time this week.

This bitter rivalry for the Knockouts champions continues to be the best storyline on Impact programming. In the latest episode, The Virtuosa came to James’ home and kicked off an outrageous backyard brawl.

That’s right. We got back-to-back home invasion angles this week. However, Impact’s execution of a tried and true pro wrestling trope was vastly superior. Purrazzo and her upcoming challenger fought it out in her barn and hit each other with whatever they could find.

This was just the right amount of cheesy wrestling imagery and over-the-top storytelling. Sometimes that kind of presentation can make something stand out when everything else is so serious. After all, that’s precisely what made the Broken Matt Hardy segments work a few years ago.

Impact is doing an outstanding job keeping this feud interesting. We can’t wait to see them meet in the ring at Bound for Glory on Oct. 23, 2021.

Big E’s Money in the Bank cash-in to become the WWE champion debuted at no. 1 on Sept. 20 ranking, but it dropped off the following week. The New Day’s resident powerhouse landed at second this week after two great performances in a row.

It was odd that Big E didn’t defend his new title at the pay-per-view last Sunday. As such, his win and his conflict with Bobby Lashley lost a little steam. That’s what made it hard to justify its inclusion on last week’s list.

However, The New Day vs. Bobby Lashley, AJ Styles, and Omos had a spectacular opening match at Extreme Rules. Then, WWE used their match to promo a one-on-one bout for the championship on the following episode of Raw.

Lashley and Big E opened the show on Monday night with an enjoyable match that featured the return of The Hurt Business. Their involvement caused a DQ finish and led to a thrilling steel cage match in the main event.

For the second week in a row, these two competitors were not only the highlight of Raw; they made it feel like must-see television again because it was so unpredictable. Both of their clips from the show garnered over a million views on WWE’s YouTube channel.

The snippet from the main event drew 3.3 views, which is more than any other video posted this week. It has been amazing to watch Big E grow into a top star this week and he proved just how much he deserves this position in just 2 weeks

Let’s be honest; we all knew this was the inevitable next stop for The Tribal Chief. It never felt like he would lose his title to Finn Balor because this confrontation with The Beast Incarnate was always the intended destination.

Yes, that’s frustrating for several reasons, but the segments focusing on this storyline on the latest episode of SmackDown were perfect. All of the small details and continuity made it even more satisfying.

For example, Reigns predictably ran when Lesnar attacked The Bloodline but he took it way more personally when The Mayor of Suplex City F5’ed Jey Uso. His reaction is visibly different when Jimmy met the same fate minutes earlier.

Lesnar gleefully told the WWE Universe that he is a free agent because of his “good friend,” Paul Heyman later. It was a great way to advance the story with his former mouthpiece and continue to sow the seeds of distrust.

Then, it played out beautifully when The Head of the Table questioned his special counsel. Heyman’s acting in this segment is yet another instance where he showed just how much he adds to this program. It wouldn’t be nearly as compelling without him.

Denial of responsibility! NewsUpdate is an automatic aggregator around the global media. All the content are available free on Internet. We have just arranged it in one platform for educational purpose only. In each content, the hyperlink to the primary source is specified. All trademarks belong to their rightful owners, all materials to their authors. If you are the owner of the content and do not want us to publish your materials on our website, please contact us by email – [email protected]. The content will be deleted within 24 hours.
best sports newsBrockHottestLesnarnews update sportsnewsupdateRankingreigns

All signs point to Oct. 4 as the Android 12 release date … maybe

How to check your Apple purchase history for unwanted…