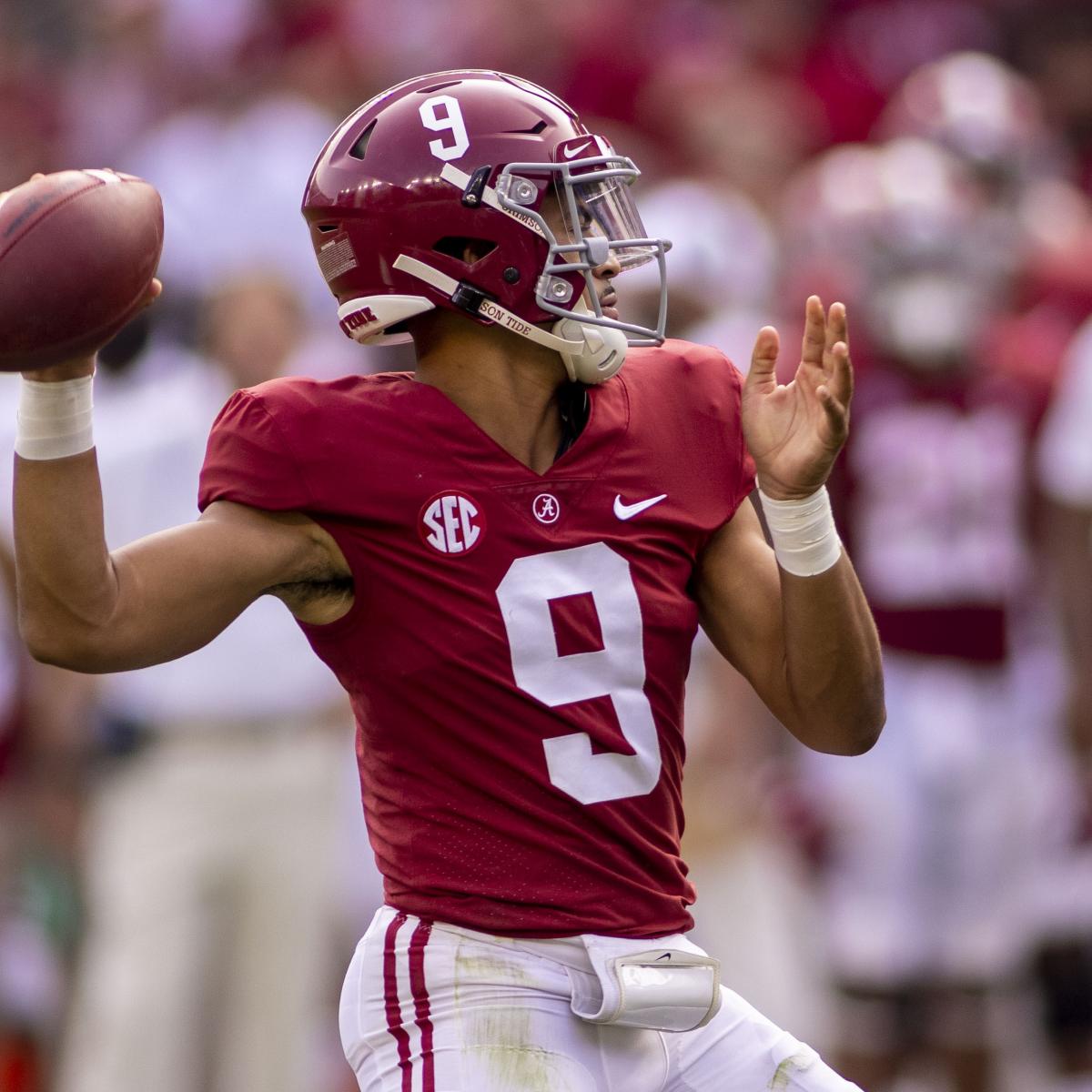 Perhaps other than Lamar Jackson a half-decade ago, this short phrase is true: You can’t win a Heisman Trophy in September.

But you can lose it.

Two weeks into the 2021 season, changes are starting to happen on the list of Heisman front-runners. We’re already waving goodbye to Miami quarterback D’Eriq King and USC quarterback Kedon Slovis. They’re not officially eliminated, but it would take a pretty heroic effort to rejoin the discussion.

Their departures allow for a couple of new faces on B/R’s Heisman ranking, which we will unveil every Tuesday throughout the fall.

As always, remember we are not projecting the future winner. It’s a snapshot of this moment in 2021, highlighting the most notable changes in the race for college football’s top individual award.

In the opener, Clemson held JT Daniels to 135 yards on 30 attempts. And then, he missed Georgia’s win over UAB with an oblique injury. Stetson Bennett IV stepped in and threw for 301 yards and five touchdowns. Quarterback dilemma? No. Daniels has an uphill climb to Heisman contention, though.

Can a player from the Group of Five win a Heisman? Do the Bearcats get credit for being a future Big 12 program? The likely answers are no and no, but Desmond Ridder finds himself in rare territory. For now, he’s the quarterback of a respected 2-0 team with 565 offensive yards and seven total touchdowns. At the very worst, he’s on the radar until Cincinnati loses a game—if that happens.

After putting up 176 yards from scrimmage and scoring twice in the Longhorns’ opener, Bijan Robinson had a rough Week 2. Arkansas held the versatile back to just 73 yards on 20 touches, though he did score again. Robinson will probably linger in the Heisman discussion until Texas drops another two games.

Hopefully nobody is overreacting to Clemson cruising past South Carolina State. DJ Uiagalelei bounced back from a tough loss to Georgia and accounted for three touchdowns in a painless 49-3 win.

Standard stuff. What happens from here matters most.

Clemson enters ACC play and welcomes Georgia Tech to town next weekend. The matchup is the first of seven straight conference games for Uiagalelei and the Tigers, so their pursuit of the College Football Playoff truly gets intense now.

Looking at stats today, Uiagalelei isn’t close to a Heisman front-runner. But he’s only played the best defense in college football and a lower-division school. Patience is necessary for an accurate view.

However, it provided a much-needed relief for everyone around UNC. Howell had tossed three interceptions—including a disastrous game-ending pick—during the Tar Heels’ season-opening loss to Virginia Tech. He only managed 6.5 yards per attempt in that letdown, too.

But on Saturday, the touted NFL prospect went 21-of-29 for 352 yards, rushed for 104 yards and totaled five touchdowns.

North Carolina returns to tougher competition in Week 3 when it hosts Virginia, which just hammered Illinois 42-14.

There’s a vocal minority that is tired of media “overrating” Ole Miss. Here’s the quick summary: I don’t expect the Rebels to compete for the SEC title, but they are so much fun.

After hosting Tulane in Week 3, Ole Miss has an idle Saturday before hosting Alabama. Corral’s major test is almost here.

Spencer Rattler had an unimpressive 2021 debut, tossing two interceptions in a closer-than-expected win over Tulane. Unless you enjoy calling people overrated, you probably thought, “well, it was bad, and he’ll probably be better next week.”

After all, Oklahoma played Western Carolina. And the lopsided matchup went exactly as anticipated.

Rattler hit 20-of-26 passes for 243 yards and five scores, adding 29 rushing yards. Rattler led seven drives, and the Sooners scored on all of them, including six touchdowns. They held a 45-0 halftime advantage, and Rattler didn’t take another snap.

Nebraska heads to OU in Week 3 for the first matchup between the one-time rivals since the 2010 Big 12 Championship Game.

Ohio State lost. That is not insignificant.

Simultaneously, it’s Week 3! If the Buckeyes finish the season 12-1, one letdown will not have removed C.J. Stroud from Heisman consideration. More specifically, a loss in which he threw for 484 yards and three scores wouldn’t have been cause for elimination.

Look, there are negatives. Four drives stalled inside Oregon’s 40-yard line, including one in the red zone. That is the biggest reason Oregon pulled the upset, and Ohio State absolutely cannot afford those issues in the future. Stroud threw a semi-desperation interception on 3rd-and-18 late in the fourth quarter, too.

But, again, the Heisman is not a two-week award. While some criticism is reasonable, it’s nonsensical to lambast a quarterback when his team put up 612 yards.

One more loss, and the tone changes. For now, Stroud remains soundly in the Heisman picture.

Bryce Young responded well to the lethargic start, leading the Crimson Tide to 38 points on the next seven possessions. He wrapped up the contest with a 19-of-27 line for 227 yards and three touchdowns, and Alabama won 48-14.

The Tide, which wrecked Miami in Week 1 led by 344 passing yards and four touchdowns from Young, will play their second marquee game of the season Saturday when they travel to No. 11 Florida for a mid-afternoon showdown on national TV.

Young enters the SEC showdown as the early Heisman front-runner. Will he leave Gainesville the same way?

Denial of responsibility! NewsUpdate is an automatic aggregator around the global media. All the content are available free on Internet. We have just arranged it in one platform for educational purpose only. In each content, the hyperlink to the primary source is specified. All trademarks belong to their rightful owners, all materials to their authors. If you are the owner of the content and do not want us to publish your materials on our website, please contact us by email – [email protected]. The content will be deleted within 24 hours.
Loading...
Loading...
best sports newsFavoritesheadingHeismannews update sportsnewsupdateRankingsports news